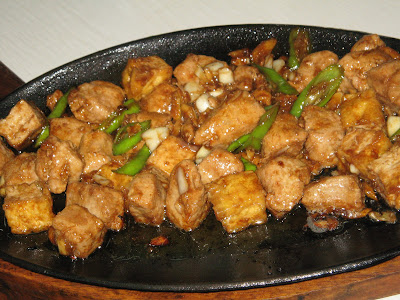 The name of this restaurant means the food comes from the kitchen of Lolo (Grandfather) Digno. Laki Digno is the progenitor of the long-time catering service and bakeshop Pinkies in Dagupan City. The small, open-air, pavilion-style restaurant sits in the front portion of a one-hectare, mostly vacant property far from the bustle of the city, and is being managed by Laki Digno's grandson, Alvin Siapno. 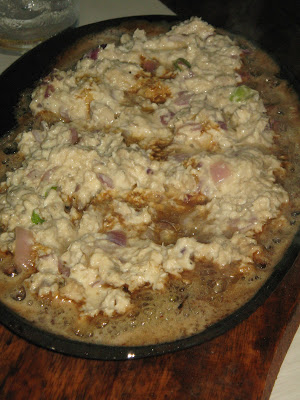 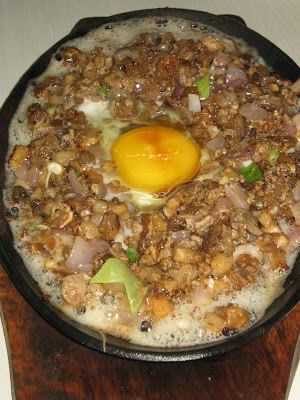 Pinkie's has long been a reliable caterer and events venue, and is well known for roll cakes and made-to-order cakes for all occasions. It operates a small eatery near the bus terminals of Five Star and Victory Liner, where pasalubong and pastries can also be bought, and where the cakes are ordered.

Kusina Nen Laki Digno provides additional venues for catered parties, and is the first to offer restaurant service. The menu is short, but provides great insight into what a good, hearty Pangasinan meal can be.

For almost a year now, we've been enjoying the ambience of Laki Digno's, all to ourselves, every time we go home to Pangasinan. My husband and I love the food, which is macho, and is not for the squeamish. I keep telling Alvin his dishes are pulutan, and the place would score big as a bar, but the family does not want to deal with the security issues involved in operating with a liquor license, and does  not want to change its reputation as a wholesome family enterprise.

Which is mighty fine by me. I want to continue eating the food there without the noise, the cigarette smoke and the kakulitan of inebriated guests. When my husband feels like it, he brings a bottle to share with Alvin, who is his close friend, after the restaurant's operating hours (it closes early). I, meanwhile, can be content   quietly sitting in one of the corners by the landscaped gardens, at peace and serene, contemplating the vast expanse of the sky as well as the property around me, after a simple but pleasurable meal. 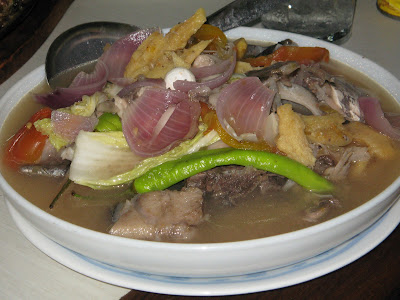 There are several sizzling dishes, and the tuna salpicao (first photo) tops them all. Mixed with fried cubes of tofu that have absorbed the garlicky seasoning, the tuna is succulent and lip-smacking. Extra rice, please.

The sinigang na tuna is very much a Pangasinense sinigang, with the mild, almost sweet sourness of tomatoes, the bite of ginger, and the zing of red onions that gives any dish a new depth of flavor. 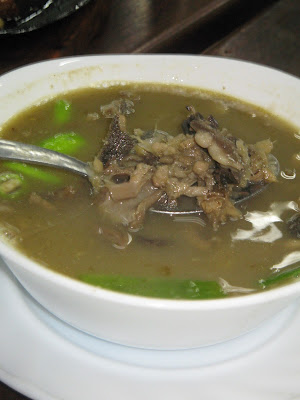 But we go there mainly for the pinapaitan or papaitan, that stew of goat innards that's sour, gingery and bitter all at once and which is a treasured dish for Pangasinenses. Because goat meat is not as readily available as other commercially-raised animal meat, any dish made with it attains a festive and indulgent status. At Laki Digno's, the flavors are assertive enough to cut through the gaminess of the offal, and balanced enough so that I want to eat the entire bowl by itself. Toothsome, revivifying, life-affirming. No rice for this one. 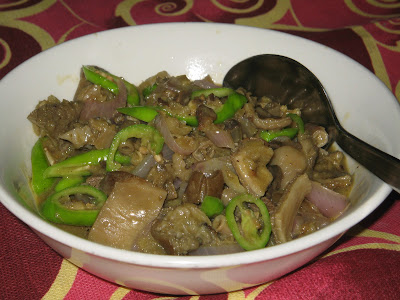 But if there's anything better than pinapaitan, it's being able to get all the meat. And at Laki Digno's I learned that such a dish actually existed - the soup was made to boil until it was reduced, so that the flavors became concentrated and were absorbed well by the meats. The flavor intensity is raised to the third degree. Heat and aroma from the sliced green peppers add to its delectability.

This dry pinapaitan is called kinigtot, which is funny because the word means it was made to be so frightened that it jumped out of its skin. I was definitely akigtot  by the exquisiteness of this dish, and by the realization that I had missed it my entire life. But now that I know, I shall make amends about it. With a big platter of rice. 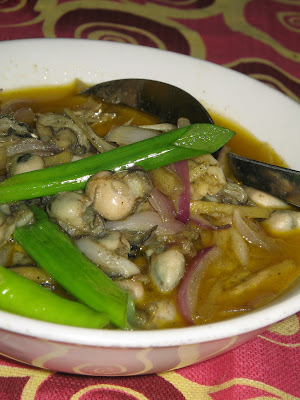 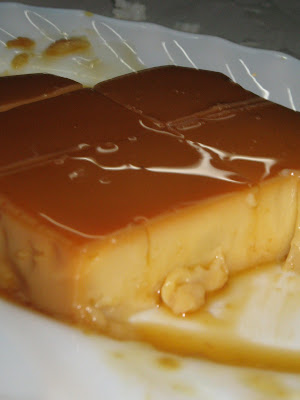 This leche flan was served on the house one day after Christmas, and it was a very fitting ending to a makapakigtot meal. Its texture made me swear - it was assuredly velvety and so silky, that I wanted it to stay on my tongue forever and cherish its fineness. I couldn't do that, of course, and the next best thing was to swallow it, and keep spooning it into my mouth until I emptied its llanera. To my embarrassment, the manager noticed, and asked the waitress to serve me another llanera. Aaah, bliss. It was peerless, like the meal that preceded it.

Just dropping by to say if I haven't said it yet that I find all your posts wonderful and informative, thankyou very much for sharing your food adventures and ingredients knowledge....I always look forward to your posts=) You're one of the few I'm so addicted on reading. That buttered talaba looks so delicious and that leche flan so luscious looking!

Hi Cusinera, thanks for the blog-love, mutual admiration here. ;-) I only regret that I couldn't join you in the monthly Kulinarya challenges, though I keep myself updated (silently nga lang) with the activities.