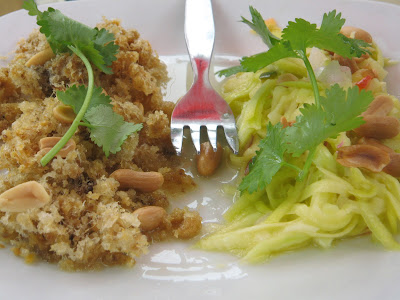 The Songkran Festival  in Thailand ended the other weekend, and it made me recall the year I, along with a group of friends, unwittingly participated in it. The first time I went to Bangkok the internet was still a figment of science fiction, so I and my friends had no way of knowing that everybody would be on holiday and everything would be closed.

And of course the travel agency where we had booked our promotional tour package neglected to inform us that we would be drenched, as in soaked to our  underwears, with exploding water bags and pails of icy water for much of our stay in our Southeast Asian neighbor. On hindsight maybe that's why we got the trip so cheap!

Good thing we were a group of well-traveled buddies, so unlike the rest of our tour group, we gamely let locals pour water on us and smear our faces with moistened white talc that rendered us as fragrant as the interior of their numerous golden Buddhist temples.

I remember we passed by a wet market where a group of good-looking males were lined up along the sidewalk holding pails of water and ice. I was screaming "water only! water only!" and they were laughing while the cutest one grabbed my arm and declared, in a deep, sonorous voice that still reverberates in my ears, "Nooo, ICE onleeeee!" 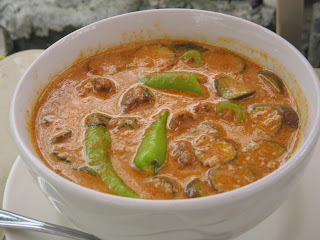 I haven't been back to Bangkok since, and if I did I'd probably skip the whole month of April going there. But looking back now I'm glad we were clueless then, as I wouldn't have that experience to recall and to  relate to my children, and to reminisce with my friends, now if we had been the wiser.

We also had no clue then where to eat, so we struck out where we could. An open air restaurant in the middle of the city, the stalls behind a golden temple. Walking along Bangkok streets  in the evening we'd find a pad thai cart in an unlit corner that produced an unforgettable and unrivaled noodle dish right there amid the clamor and smoke of the tuk tuks. Nonetheless, the food we ate was better than anything churned out by any fancy Thai restaurant here. 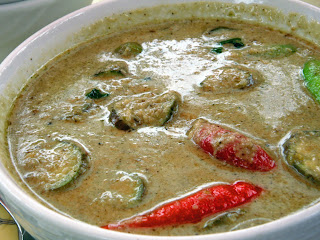 But subsequently I discovered a place I could eat some Thai food that was close to that Bangkok experience. The ingredients aren't that authentic, as the dishes offered were adapted to what's available in the country. But it was fresh, home-cooked food, and had the charm of being served by friends you are visiting at home.

I witnessed how Som's started out, a few tables set out on the sidewalk opposite the apartment where a transplanted Thai, his Filipino wife, and their family, lived. I used to pass by the stretch of road connecting Kalayaan Avenue to Estrella in Makati every evening, and I would be curious about a seemingly daily inuman along Alguer Street, inside the perimeter fence that demarcated Rockwell property. In time there were more people, and I'd notice pricey cars parked streetside. I dismissed it then as probably the tambayan of drivers waiting for their bosses having a good time along Kalayaan or Burgos. 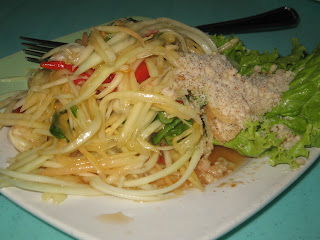 Until a dinner companion alerted me to her ongoing fascination, which was Som's. So I had to try, and I've been  hooked since then. It was a simple family affair - the cousins took the order, delivered it and cleaned up afterwards. The matriarch of the house cooked what the lola and apos sliced and chopped in a single burner stove, so I always went early, prepared for a long wait. The CR is the family's toilet inside their living quarters.

A few months after the eatery's reputation burgeoned and captured the imagination of foodies metro-wide. But it didn't quite get the same reception. In fact, I know no other eatery that attracted such extremely polarized opinions than Som's. It was touted as one of the best restaurants in Manila, while others slammed it as pretentious or totally unauthentic. 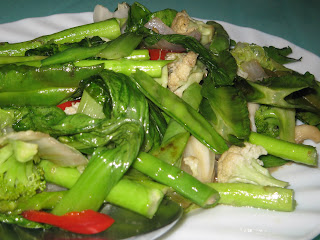 But it got the attention and the business. It soon expanded to the adjacent apartment, operating a branch somewhere else in Makati for a while. Now it has moved out of the proprietor's house into a large, high-ceilinged building with several official parking slots in front, and waitresses take the orders. A buffet is offered once or twice a week. But the matriarch is still there, and so is the lola. And the food remains the same, with the same home-cooked goodness and its notorious inauthenticity. And the bill, just like old times, will not put a dent in your pocket like a supposedly authentic Thai restaurant in the city will. 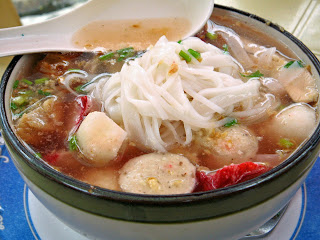 Back when it was still operated out of the owners' home, I arrived to find a cousin squeezing a banyera of kalamansi. I understand this is one of the contentions for the use - or non-use - of authentic ingredients, as kalamansi is not the citrus of choice in Thai cooking. But I don't mind, for who says what is really authentic?  Even in Filipino cuisine who can officially say what authentic adobo is? For each region, and even each family has its own standard of what adobo is and should be. 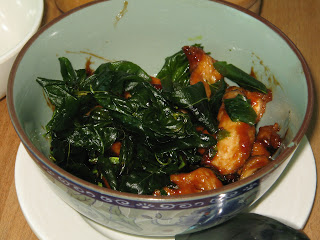 Another time, a group who obviously had heard much about Som's arrived and disbelievingly perused and discussed the menu. One guy said if it's really good then they should order the pad thai, as pad thai should be the Thai dish by which Thai restaurants should be judged.


That group probably never went back, as Som's pad thai is atrocious, the noodles slick with banana catsup. But I regret that they missed out on the other good things at Som's. Like the curries, thickly creamy and rough with grated gingers, or the catfish salad, bracing in its kalamansi dressing and the thinly sliced native green mangoes. The mixed noodles is as good as Bangkok streetside fare, aromatic with fried minced garlic and chopped wansuy. 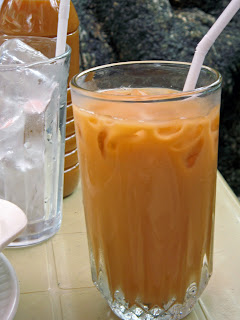 And there's the Thai tea, which I'll never replace with any faddish milk tea, freshly brewed every day in the premises. A lot of other new dishes have been introduced over the years, but these are what I stick to, for which I get rewarded consistently every time.

So until I get the courage to have my kids experience Songkran, we'll be at Som's.

Email ThisBlogThis!Share to TwitterShare to FacebookShare to Pinterest
Labels: from around the world, restaurants, sabaw (soup), sira (ulam/viand)