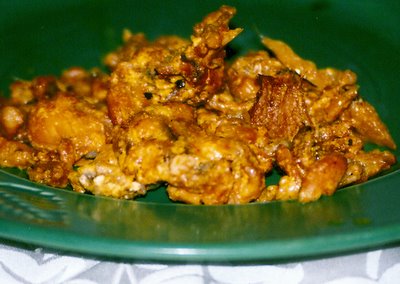 
It looks like the end of the rainy season in the Philippines. The short but tempestous rains last week, which usually marks the approach of All Souls Day, have all left, and all that dark clouds do nowadays is to just threaten to pour, but leave the earth dry as they get carried by the winds.

So it is time to say goodbye to the rare but anticipated goodies brought by the rains. I had resigned myself to not being able to eat patang for years now, them being so commonly absent in the wet markets, although I always see boys and men with fishing rods prodding canals after a heavy rain.

But this is my lucky year, having eaten both bisukol and kape during the rainy season, and, to my utter disbelief, given a plate of curried frogs from Sison, a town in Pangasinan at the border of Benguet province, which you pass by on the way to Baguio City. This was during a potluck festivity among my husband's pilot training class.

I note this because it has been a long time since I've eaten all three in one year, and because it is my first time to eat frogs cooked in a curry. They're usually eaten fried, adobado (in vinegar and soy sauce), sinigang (in soup sauteed in tomato), or tinola (in soup with ginger). The last two preparations I usually shied away from, because they seemed to heighten the sliminess of the frogs (although it was really all in the mind).

And then I avoided frogs entirely, including native (free-range) chicken, when I went to college and the biology teachers talked about what organic, free-range animals and reptiles ate, with the accompanying plate-large eyes and shivers. And my childhood bestfriend, who is now a doctor, went into frog and cat dissection on her way to medical school.

But I'm all grown up now. Braver. Willing to try anything that could be eaten. And wanting to go back to the landscape of my childhood food scene.

This curry was cooked in gata (coconut cream) and flavored with curry spices until almost dry. It was an excellent and inspired way to serve frogs. The flavors have all infused the frog meat, and they are unrecognizable as such, for those who have an issue with frogs.

Curry was not a household dish where I grew up, so this dish cooked in Pangasinan intrigues me. I see some outside influences here, or maybe an inspired cook. Anyway, if this had been cooked and served in our house I think I would not have forsaken frogs.

I have never been brave enough to cook them myself but I do like an occasional fried frogs leg... they are really quite succulent and tasty. I just can't get over seeing the live croakers then having the merchant skin and chop them up! Somehow, I can't even mentally handle seein them alive before eating! They are easier to handle in a good restaurant! Heehee, talk about all being in the mind. Last year in Bangkok at a great restaurant I had a platter of frog's legs...they were superb!

Didn't realize until now, that we can cook Frog legs other than Frying them. And also, Filipinos do eat them...some of my friends here in Manila...dont dare eat them. :(

i kept thinking what patang means. then it came to me..lol. DUHHH me. i've tasted them growing up, tastes like chicken. i've had this deep fried and adobo. this version sounds good too :)

Hi Kai, am creating links for my blog, can i include urs?

Hi Kai! I have never had frogs but I will soon! I have beem meaning too because a big part of my adventure in food is trying things I have never tasted before :) I don't think I'll be able to find that yummy looking curry though...

LOL! I had this at my lola's house and I had no idea they were frogs! No wonder my parents used to giggle when I refused frog legs at restos when we went as a family. I must have subconsciously blocked what they looked like. Sad, though, I don't remember what they tasted like. I was more obsessed with her sweet goodies.

i've only had frog legs like marketmanila -- any chance you could teach us how to cook them whole? i guess my squeamishness comes from not knowing what to do with the rest of the, uhm, stuff. like eyes and that bulging sac, etc. or should i just treat them like chickens?

MM and Stef, the markets in Pangasinan sell the frogs skinned, gutted, and cleaned, skewered on sticks, so they're easy to cook - without having to see them alive and jumping! Though I did play with myriads of tadpoles when I was a kid....haha....We cook them whole, not just the legs. As is. If you ask me how to skin and dress them, I would have to ask my doctor-friend, hahaha.

Pastry, frogs are as versatile as chicken!

Yup, Dexiejane, very much like fried chicken. This curry, too, like a bony and a bit undernourished chicken curry.

Grace, sure, and thanks!

Joey, the fried frog legs at Wok In restaurants are ok. In Binondo, too, you could probably find there an exotic dish with frogs in it.

Phisch, haha, maybe you could have somebody order it and say it is chicken?