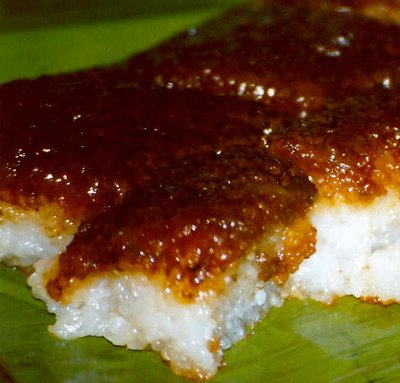 Latik in Filipino means a caramely sauce topping made by cooking together gata (coconut cream) and panutsa (molasses cakes). In Pangasinan, however, when you say latik you refer to a type of kanen (kakanin, sticky rice pudding) with latik topping. I gathered this is known as bibingkang kakanin in Metro Manila, bibingkang malagkit in Cavite, calame nasi in Pampanga, biko in the Bicol region, and I don't know what else in other parts of the country, if eaten at all.

I like latik. I have yearnings for it sometimes. It is different from other rice cakes in that the rice grains come out from the cooking whole and intact, and glisten like pearls. It is not so sweet - the rice hints of coconut cream while the topping is like a sugary bonus. Like icing on a cake. I like how the latik melds into the rice when chewing it, and the sweetness here and there teases the tongue.

Latik is a labor-intensive kanen, and I am always in awe, and happy, that it is sold cheaply (Php5 per rectangular slice - about ten US cents), and is always present during gatherings, birthday parties and holidays. It is one of the usual accompaniments (the other one being Calasiao puto) to salty, greasy pansit guisado (stir-fried stick noodles).

But I prefer it homemade, for the thickness of the latik topping. The topping on the latik vended by old women in the streets and in the market is so thinly spread, I can hardly taste it, making me want to dip the latik in sugar like a suman. The uncle whom I always request to cook latik has gone on ahead from this life, but luckily, an aunt-in-law cooks a good (though I suppose, not better) latik.

Although it is made year-round, it is best to cook latik this time of the year, when the ansak-ket (malagkit, sticky rice) is newly-harvested, fragrant, and easily absorbs any liquid. The last detail is important, because a good latik should be chewy soft, made pliant by the gata. Old ansak-ket has to be cooked with more gata than usual to achieve the desired soft consistency.

Latik lands heavily in the stomach, one slice for afternoon snacks sufficient to tide you over til a late dinner. Probably the reason why it is a favored party food even though it involves lots of sweating over several woodfires.

It actually involves several processes. First, ansak-ket is cooked with gata with a dash of sugar and salt on a thick talyase (tulyase, a huge iron skillet smaller than a kawa) over a raging woodfire. This is constantly stirred with a balaok (flat wooden ladle) to even out the cooking and to keep the bottom from burning. When the ansak-ket has turned transluscent, it is transferred to a sukugan or lasong, a flat, shallow earthen pan which is a larger version of the ones used to cook bibingka galapong.

The latik is then made by cooking the panutsa in gata until dissolved completely. This is also stirred constantly until thick and oily. I have to note that we prefer a panutsa made from silag, a kind of sugar palm, and not sugar cane. This panutsa is darker, its sweetness more intense.

The latik is then spread on the cooked ansak-ket, covered with a thin aluminum sheet, then baked in a primitive oven - the top and bottom are fired with coals of kukot (dried coconut husks), again much like how a bibingka galapong is cooked. When, for some reason, it is difficult to heat up both the top and the bottom at the same time, the top is first heated up with coals before the bottom. It is never the other way around, or the latik will mix into the ansak-ket.

Overbaking the latik, though it happens rarely due to the thickness of the clay pan, will result in a crusty topping and burnt bottom, though I don't mind the former. It gives a whole new dimension to eating latik - like breaking onto a creme brulee.

A very economical method of cooking, if I may say so. Coconut meat is made into the gata that goes into the latik, and the discarded coconut husks are used to cook the latik.

Latik does not keep due to the high gata content, so it is only made during the aforementioned gatherings, or when there is lots of company to finish it all off within a day or two.

I'll gladly be there on day two.

We call this 'bibingkang malagkit' in our corner of Cavite. Good thing you posted this. I've been thinking about how to adapt this to a modern kitchen and with the available ingredients in Europe. Gotta put my thinking caps on. ;)

Kai! What an amazing picture...my mouth is watering! :) Nothing like local kakanin for me...

Ah, there we go with the name game again, hehehe!

Latik for us is the pure unsweetened curdled coconut cream we put on top of suman and calame (kalamay?).

Your latik is our calame nasi.

you have to tell me where to find this recipe, it looks amazing!

Thanks, Anthony, I'll be doing an easier one - without the "pugon" cooking - and I hope I can post it soon.

thank you.....i grew up in san carlos pangasinan, and what i missed most about the place is the latik of the bibingka the old women sold daily at the market. i've been trying...in vain to duplicate that yummy latik. now i have an idea how it's done. thank you much!

hehe.. if you can spare another invite, i'm game for a day1 appearance! man, i'd even do all the mixing!

wow, nice to find a blog from Pangasinan.. thanks for creating this site. makes me mouth watering. I miss latik so much and also the puto in Calasiao

you're picture is mouthwatering... im pregnant and im craving for this! But sad that i cannot find something as very good as this here in USA...:[

Erlyn, you can try cooking it. Just mix in a pan, then finish it off in an oven.