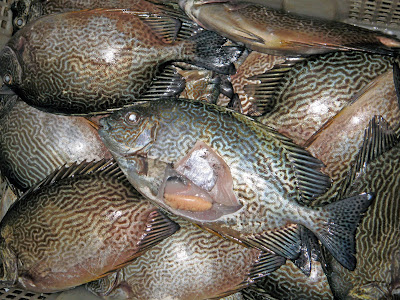 Malaga, of the family generally referred to as samaral or siganid, is a premium fish served on special occasions across the province of Pangasinan, and as I've discovered during a trip where my meals were catered, as far as Baguio City.

Malaga is a marine fish, but in Pangasinan it is cultured in ponds in coastal towns, particularly in the municipality of Bugallon, where a malaga festival is celebrated.

I am not sure what the exact scientific name is, but it seems this is Vermiculatus Siganidae (vermiculated spinefoot), which conforms to the description of vermiculations (those black-and-white zigzag patterns) on the skin.

Relative to the prized Bonuan bangus, malaga is expensive, so is not served daily. Large batyas upon batyas (huge tin basins) of malaga is sold at an average Php200 per kilo at the fish daungan and wet market of Dagupan City, by the Pantal River.

While bangus costs Php100 for five small ones or three big ones, big malaga can reach Php250, with the small ones going for Php180. Anything lower is suspect - the malaga might not be fresh.

And freshness is important, because malaga spoils easily, smelling and tasting like a dead rat, the flesh disintegrating when cooked. But when fresh, the flesh of malaga is firm yet soft and very delicate, with a slight, barely detectable sweetness.

In Dagupan, the freshness of the fish being sold is shown by the slits to the stomach, especially with bangus. In photo above the flayed portion is folded to reveal the thick fat and the roe.

Malaga is very meaty - fleshy - with no pesky tiny spines, just the one big skeleton, so it is convenient to eat. It is a pain to clean, though, because the fins are very sharp and can cause very deep wounds that could be excruciatingly painful. A skill is needed in removing the internal organs, too, since carelessness could unintentionally crush the bile, resulting to the malaga tasting bitter. 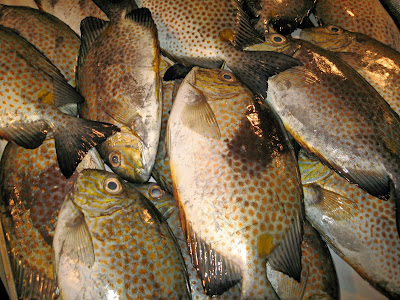 Malaga is among the country's cultured high-value, white-fleshed fish exported abroad. In fact, it belongs to the species being promoted for culture for export under the mariculture park project of the Bureau of Fisheries and Aquatic Resources (BFAR).

What is found in other waters, though, especially in the Visayas, is the variety samaral or siganid, which is orange-spotted (Siganus guttatus). This is what I find in Cavite City, though very, very rarely and at such high prices (average Php350), and more commonly but more expensively (Php450) at the seaside markets.

In the Hiligaynon language, malaga/samaral is called kikyero, and is cooked in broth with the ubiquitous Negrense souring agent, batwan. Malaga skin is smooth and thin, while the samaral's is a bit leathery and rough, like thin goat skin that was burned (pinolpogan), curling up from the edges when cooked.

Malaga and samaral/siganid are worlds apart from the popular danggit (rabbitfish), which is very skinny and malansa (fishy), that's why it is salted and dried. Malaga and samaral are cooked fresh, in soups with minimal addition, only so that their delicate flavors are enhanced.

Malaga is also different from pingao, which is the Pangasinan term for kitang. Pingao is narrower, with more outstretched fins. It is also inferior to malaga, its flesh not as tasty.

Related Post
Sinabawan a Malaga
Posted by Kai at 4:17 PM

The names of this kind of fish are a bit confusing. Perhaps this what makes them so special, their mystery. :-)

Nice article! It advocates the essence of local markets in the Philippines. By recognizing the local markets, many Filipino locals can benefit. Actually there is a new Weekend market Manila where you can buy affordable and fresh goods.