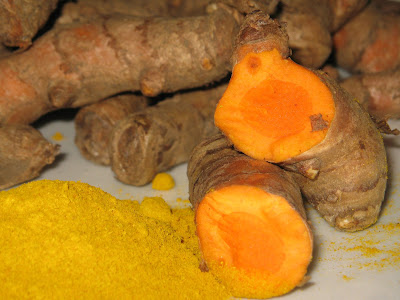 
This is the ginger I am just starting to get to know well, for I only knew one kind of ginger until about a couple of years ago. I have heard about luyang dilaw in college, when I started making friends with people from all over the country, but did not actually came face to face with it until the family moved to Cavite.

Of course I have been eating it in a blend in the form of powdered curry since I was small, but not as a main ingredient on its own. There is no name in Pangasinan that I am aware of, since it is not prevalently used in the province.

It is more commonly known as dilaw (the Tagalog term for the color yellow) because it turns everything it gets into contact with an attractive lemony yellow. Known in other Filipino languages as kalabaga (Bisaya) and kulyaw (Ilokano), and turmeric the world over, or at least in those places where English is spoken. In other languages its name is the equivalent term for the color yellow.

As the common ginger (Zingiber officinale) is the ginger I know and prevalently use, it is the standard to which I compare other ginger I meet, or did not meet early on in my life. So relatively speaking, luyang dilaw is more peppery than gingery. More earthy. The fresh rhizome smells like wet socks, or wet dog fur at the extreme. 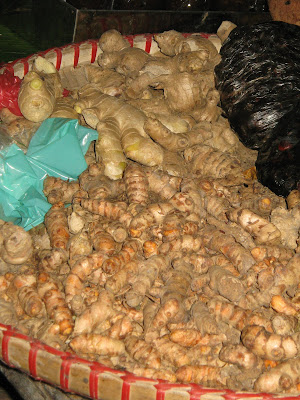 It looks exactly like a ginger rhizome, with branching nodes and pale, thin skin, the thick flesh compact. But it looks emaciated when placed beside the common ginger and another variety, galangal. It looks like a pinkie, the cylindrical form more defined, while the latter two are much more thicker than a thumb with a more flattened out shape.

Beneath the thin, pale skin of the turmeric a glimmer of orange shines through. Peeled, the flesh is more porous and not as fibrous, more akin to carrots than ginger. It is a brighter orange than a carrot, though.

I sometimes buy kilos in Cavite to bring home to the elders in Pangasinan as organic pasalubong. It is very much appreciated, because of its anti-inflammatory and anti-oxidant, and subsequently anti-carcinogenic, properties, as well as its lowering effect on cholesterol levels.

A poultice of the rhizome also purportedly heals skin eczemas and dermatitis. It is boiled and made into tea to ingest its heath benefits, and for its believed potency in expelling intestinal worms.

So far I have been rubbing and marinating roasted chicken and chicken steamed on a bed of salt with pounded pulps of turmeric, mainly for the nice color it imparts, and not for the flavor. The flavor is too subtle to make a difference, anyway, in such dishes.

I try mixing it with our daily kalamansi juice , which gives it a rather unnatural deep yellow color, like we were drinking powdered mango or dalandan juice. And in arroz caldo, with unfavorable outcome.

But I have eaten a nice, aromatic dish of marine catfish steamed in turmeric and lemongrass (alimusan sa dilaw) at an eatery in Iloilo, and bringhe, a delicacy in Pampanga where glutinous rice is seasoned with turmeric, coconut milk, meats and seafood, and wrapped in banana leaves.

Friends from Bulacan tell me luyang dilaw is used in paksiw na isda (fish stewed in vinegar), and there is a festival celebrating the plant (annually in May 2, in Marilao). In Cavite it is used in adobo, where the adobo is stewing meats only in vinegar.

I hope to encounter more Filipino dishes using this spice, so I could incorporate it more in my cooking. Though I’m sure I’ll find it as an ingredient in many cuisines, as it is used extensively the world over. Perhaps I’ll try my hand at drying some rhizomes to pound into powder, especially now that turmeric is in season. Maybe I could even come up with my own curry blend.

we use dried/powdered luyang dilaw in our atsara, put the powdered dilwa in a katsa and then dipped in the vinegar/sugar solution until you get the desired color.

Oh, so that's why some atsara have that nice, lemony color! Thanks for that info!

so that's what its called here in Luzon... luyang dilaw. LOL It's the star ingredient of valenciana and when I moved here in Cavite, my mom regularly sends me powdered "kalawag" for my valencianas. McCormick carries turmeric powder but I find it a bit too expensive and it lacks the turmeric-ish aroma that I want in valenciana.

Oh, it is added to valenciana then? Instead of tomato sauce for the color, I presume? I can imagine it subbing for the pricey saffron....

How much is raw Turmeric in Cavite and which part of Cavite do they have this in bulk? Sa SM po kasi mga tig 100 grams lang tapos medyo mahal.. :( We drink this regularly so we're looking for an alternative place to buy from.

I just visited your site luckily and would like to say that I enjoy reading your posts every time. We will be waiting to get new articles from you. So informative and elaborative. You’ve just presented your nice ideas though your writing. Good work!