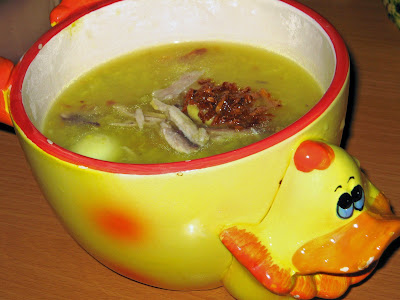 No matter that PAGASA says it’s not yet the rainy season in the country, it definitely feels like summer stopped, midway through the season.

No rains during the daytime, the sun actually shines in the morning, but the entire sky becomes overcast by lunchtime, and I go home to rains running off the pavements. The air-conditioner has been on vacation for weeks now.

Which is just fine. I haven’t fully enjoyed my summer tomatoes, the fruits, salads. My travel plans had to be postponed for the later end of the year. But the kids are on their porridge stage.

Just when my eldest is already sporting a pair of sparkling new, “jagged-like-shark’s-teeth” central incisors on his lower jaw, all he wants to eat is a bowl of softness and mushiness. Maybe to empathize with the baby, who only has eight front teeth. She eats raw carrots, though. The middle child doesn’t care and eats anything, but mimics whatever her kuya wants.

Which is just fine. And perfect for the rainy season, whether or not it is officially pronounced to have started. So we’ve been having a lot of porridge lately. Champurado, oatmeal, arroz caldo, ginataang mais, ginataang halu-halo, imbibed with hot milk tea or native hot chocolate.

Arroz caldo, from the Spanish term meaning “hot rice,” is Filipino comfort food made of glutinous rice boiled with chicken, ginger and enough water so it turns out soupy. It is served with boiled eggs, fried garlic, chopped spring onion, cracked or ground pepper, patis and kalamansi on the side, for the diner to mix in according to his or her own taste.

It is comfort food for me, alright, and I remember the times, in my childhood, when I sat down with the entire family to candle-lit dinners of arroz caldo while the rains and winds raged in Pangasinan.

I grew up being accustomed to typhoons – the province of Pangasinan is almost always the exit point of tropical storms as they leave the Philippines’ area of responsibility. And we always combated the cold, the rains, the brown-outs, and the wails of the wind with steaming hot arroz caldo, my siblings and I fighting over the two drumsticks, sweat pouring down our brows.

Cavite doesn’t seem to be storm country, but we live by the bay, and we experience rains and typhoons like nobody else. So it’s like I’m a child in Pangasinan again, seated at the table along with my own children.

Even though we have our own power generator, sometimes we still light candles just for the fun of it. Or we just let brown-outs be and wait for the main power to come back, enjoying the soft shine and wavering light of candles, and indulge in shadow games after dinner. 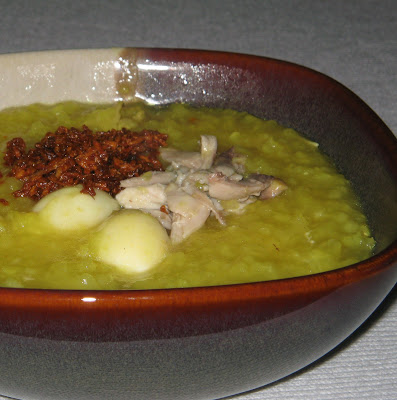 I may be a child again when I eat arroz caldo, but my arroz caldo has grown up. I now know that different glutinous rice varieties yield different kinds of viscuosity when cooked, and the inferior kind results in a watery porridge with the texture of ordinary rice. And shredding the chicken meat removes the difficulty of managing a chicken cut that is thick with mushy rice kernels.

The kids are still too young to fight over the cuts, but they do tease each other about the number of pieces of quail eggs they get, or native chicken eggs if there’s more than enough for each.

When I was a child our arroz caldo was pale, but my husband insists that a yellowish arroz caldo looks more appetizing. So I started adding kasubha, those saffron-like threads that add color, if not taste.

In Cavite I discovered that luyang dilaw, sometimes called luyang Tagalog (turmeric) is abundant and cheap, especially when in season. And because I learned that it has many health benefits, I try to incorporate it in dishes I cook, whenever possible.

A friend who has deep Tagalog roots taught me that powdered luyang dilaw is used to dye arroz caldo, but her family buys the ground kind all the way from Quezon province, where they know the producer and they are sure it is pure and not diluted with additives or extenders.

Turmeric powder is available in the Cavite public market, but of course I have no way of knowing the extent of its purity, and even possibly its authenticity. I asked the vendor if it was okay to substitute with fresh ginger when using in arroz caldo, but I was told the taste would be affected.

Oh well, I can be stubborn, and I had to find out. So I used fresh turmeric, thinking a ginger is a ginger, and ginger is one of the main component tastes of arroz caldo. The more pronounced the taste of ginger, the better.

So I had a beautifully dyed arroz caldo, appetizingly pale yellow, but it had notes of curry. For the baby it was fine, since she probably does not remember well yet what arroz caldo should taste like, and she ate bowlfuls of it.

The two kids had difficulty finishing theirs. Even the other adults at home. A big pot of arroz caldo doesn’t last a day in the house, as it is eaten breakfast, lunch, afternoon snacks, dinner, and even after dinner. This one, though, lasted three days, with me eating more than half of it.

So I’m not using fresh ginger again. I’ll try the powder next time. Whatever it contains won’t probably hurt if I use just a pinch of it.

I put both ginger and turmeric in my arroz caldo. If I have real saffron, I put a few strands instead of turmeric. If fresh turmeric is available (it's expensive here, A$10/kilo), I only put a few thin slices. But usually, a pinch or two of powdered turmeric will do.
My son likes the colour, he says it's more appetising.
Do you saute the turmeric, onions, garlic and ginger to release the fragrance?

That's an expensive turmeric. Currently, the price of turmeric in Cavite is Php40, or about less than a dollar, since it is in season. It goes up to Php100 (around US$2) off season.

Yes, we saute everything, plus the chicken, until it renders its juices. I was averse to sauteeing before, but I realized I love the smell and taste of "fried"/sauteed ginger in arroz caldo.

I really want to eat this especially during breakfast.Its so yummy breakfast.