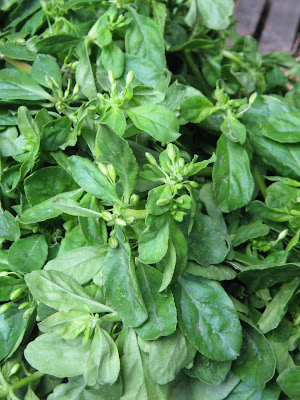 Perhaps to remind us of what Lent is all about, clumps of papait with lush green leaves were omnipresent at the public market in my hometown in Pangasinan. Literature in the internet suggests the weed is seasonal, but this was the first time I have seen it being sold. Of course I was not a prolific market-goer in my childhood, but papait never appeared at our table, and my in-laws have not cooked it before.

The leaves looked similar to the Baguio spinach, in the shape, size, color and thickness of the leaves, and indeed they belong to the same family. They looked harmless enough.

Perhaps I have not seen it before because it wasn't sold before - it grows at will, gathered freely in empty fields, or in the kaalugan. Perhaps we never had it, as neither did my in-laws, because of its reputation as the bitterest thing one could ever eat. But I wonder, because we eat ampalaya - the leaves as well as the fruit - like it's fried chicken. 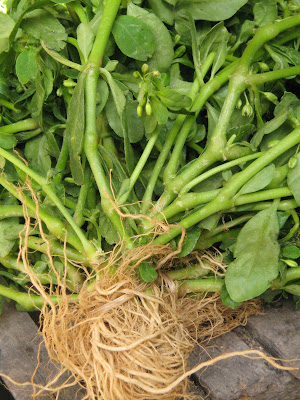 Since there were more papait at the market than ripe tomatoes, which was alarming, and there were as many papait as there were sibuyas at this time of the year, which was normal, I couldn't deny fate, and I had to buy. An in-law was with me that time, and I uttered aloud my decision. She didn't seem thrilled, but replied, sige, ag mo ni atawayan sirin? (okay, so you haven't tasted it before?).

Vendors confirmed the leaves were ampai-pait (too bitter), but that they cure a lot of illnesses and various afflictions. They also volunteered that the leaves are traditionally sauteed with tomatoes after parboiling them.

I was thankful for those freely given information, because when we got home it turned out nobody at my in-laws' household knew how to cook papait. The designated cook hemmed and hawed, uttering out loud she'd boil the leaves briefly, then after a while recanting, until she decided not to cook them, wrapping them instead in banana leaves and shoving the lot in the dark confines of the refrigerator. 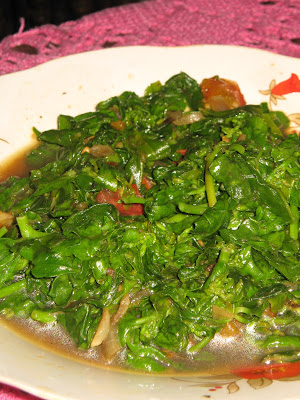 At Php10 per bundle, I thought nothing would be wasted if the leaves withered. But I thought again that it won't be money wasted - it would be the opportunity to learn something, and that something was significant because it concerned the food culture of my hometown, and a big part of Luzon, as I learned afterwards.


So I was nothing but persistent, and pointed out one day soon after that it would be nice to have the leaves as a counterpoint to the igado we were having for lunch. So the leaves were dug out from their burial place, and were promptly sauteed, without the advised pre-boiling. There was a bit of "soup" in there, because the leaves were not thoroughly drained after washing.

The cook is what elders call "makaluto," because she can cook ampalaya fruit which turn out with only the slightest hint of bitterness that children spoon lots of it onto their rice. Maybe that magical quality also lent itself to the papait turning out to be not as bitter as foretold.

It was bitter, but not so bitter that it was intolerable. In fact it was milder than ampalaya leaves. The bitterness was normal, in the same acceptable level as, say, mustard greens, or bokchoy. I think it would pair nicely with balatong, or with chopped pechay, if I can get hold of a bunch again.  And I will buy again, if I see it. It would be a good addition to my green leafy vegetable repertoire at home, and who knows we might benefit from its purported healing powers.

So I was glad I chanced upon papait, and we had the courage to cook, and eat, it. Good discoveries happen to the brave.

Papait is the term for this vegetable (weed actually) in Pangasinan and Ilocano. It is known in other areas of Luzon as amargoso and sarsalida, and elsewhere as bitter leaf, slender carpetweed, cheng geng xing su cao, with scientific name Mollugo oppositifolia Linn. It is eaten to combat diabetes, hypertension, anemia and various other ailments.

the variety of green leafy vegetables in asian groceries is astounding. sometimes i think i'd like to try sauteeing each one to compare the flavors. i will have to be on the lookout for this one.

i wash my veggies leaf by leaf to clean them of soil and insecticides and i wonder if this might be reason why your cook recommends pre-boiling.

btw there is still some bile in my freezer that i thought i might have a chance to use when i saw the title of this post. but this is just as good, even better because of its healing qualities.

Lou, I don't think it'd appear in your neighborhood stores, it's a weed here that is not cultured. The pre-boiling part is supposedly to reduce the bitterness. It's totally organic - it's impossible to produce commercially, so people just wait for it to sprout in season and gather it.

Kai, my Grandma used to blanch in boiling water the papait or ampalaya with 1 tsp. of baking soda and rinses them in cold water. It pares down the bitterness and is excellent when mixed with tomatoes, lasona with agamang as a side dish. I'm drooling now.

Ooh, I'm drooling, too, thanks for the tip. But I'd have to wait til next summer to get them again!

My goodness you had me with this. I am choked with nostalgia about papait. I find it more bitter than ampalaya but to me ensaladan papait with inasin and kamatis is comfort food. It reminds me of rainy seasons past and my bae tan laki who passed away respectively in 1999 and 2005. I grew up in Pangasinan and most of the food in our table is grown in the backyard or from the bangcag. I took this for granted growing up. The food we eat like papait is 100% organic and fresh and I know where it came from. Now most of the foods I buy from the grocery store is fresh...a week ago. Sadly even the local produce where I live is not as fresh and malasa like our pising and prutas. Worse are meats and seafoods frozen for months. Live fish, clams, talaba would cost a fortune. And it's not as malasa like
Pangasinan's seafood. I remember my mom was so choosy with what she buys from the public market that if the sitaw is not mabango and the sap is already dry she'd say it's not fresh because it was picked probably the day before. The irony is now where I live I have to make do with sitaw with dark spots already if I missed the delivery date (yup, the fridge can only do so much) and unfortunately husband is not into any other form of cooking (western, fusion, chinese and whathave you) because the pangasinense- ilocano flavour palate is forever in his blood and is his requirement for everyday fare. For all i know he may be trying to fill a void of being miles away from real home sweet home. So sitaw with dark spot it is for his pinakbet. I wish that some enterprising soul would think of exporting papait. And I hope you'll come up with a coffee table book about everything Pangasinan. I love your writing. It touches the soul.

Thank you, Anna. I am still in the Philippines, but I can feel your longing and frustration. I am married to a Pangasinense, too, and I've had Pangasinense cooks at home ever since I got married, so we have Pangasinan fare most of the time at home wherever we are. But sadly, we cannot recreate all the things we want to eat that evoke of the home we grew up in - there's no acceptable inasin, for one, and the vegetable choices are very narrow. Whenever we go home, which is rarely nowadays, we stuff ourselves silly with fresh vegetables and bangus and lukan and talaba and pantat, and we bring large coolers to fill up with them to take home. But I'm sure your situation is so far removed from ours. But as you do, we try to cope by dreaming and hoping that someday, our nostalgia is assuaged.

this blog has become more than just a food and travel site. it is enriched by commenters who share stories about their lives away from the place they love and hold dear in their hearts.

My parents call that "saikan/saekan". We're from Valenzuela/Bulacan area and can easily find it in the dried carabao's pit. It was usually cooked with canned sardines or tinapang isda probably to neutralize the bitterness. Not a fan it though I can eat that only as a side dish and not a full "ulam".��

My super favorite vegetable.i don't like boiling it to remove the bitterness.I just sauteed it with tinapa,onion,tomato and alamang.You can also substitute papait to ampalaya.
You can cook a lot of recipes with this veggie.