The Best Pakbet I've Had in a While 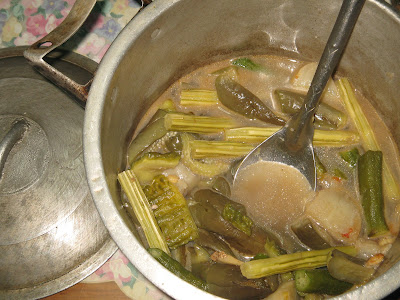 It was umami with the excellent bagoong, slick with the slimy okra, and punctuated by bitterness from the palya and sweetness from the white kamote, while the bunga'y marunggay (moringa pods) and talon (eggplant) made sure the entire stew was greenily fragrant.

It was cooked in a kaldero, the vegetables soft but still firm. Ginger and sliced red onions added a bit of heat and spice, and enhanced the tasty stew.

There are as many variations of pakbet or pinakbet as the number of households in Pangasinan. Once in a home economics class in elementary school I saw a teacher layer okra, palya, talon, tomatoes and agamang (salted fermented krill) in a banga (clay pot) and put it over a raging woodfire covered, without a single drop of water. When I asked how the vegetables would cook, she replied the water content of the eggplants and the okra would be enough, though it would result in a dry stew. The pakbet was left to cook on its own without stirring, going through only one hard toss towards the end of cooking.

Eggplants, okra, ampalaya, ginger and bagoong are the basic ingredients of pakbet in the province. There may be tomatoes, but never squash, like how the rest of the country knows what pinakbet is. Squash we mix with other vegetables, traditionally sitaw or yard-long beans, but not, and preferably not, with pakbet.

There is the pakbet that's boiled to kingdom come with beef, which becomes a homogeneously brown slop. There is my HE teacher's, half-cooked and vibrantly-hued. In my childhood it was as ma-sabaw as sinigang, because children were understood to be vegetable-averse, so the best thing was to spoon the "soup" onto our rice that we may benefit from the vitamins that leached into the boiling water. Then I had pakbet with bacon and sauteed tomatoes at a Filipino household in Frankfurt.

In my household I like to add saluyot (jute) leaves, preferably with the head of a grilled bangus. My househelp is used to having kamote in her pakbet. The version in photo was served at my in-laws, who do not cook pakbet strictly like that, but adds whatever is in season.

There is a technique to a more intense umami - sauteeing the bagoong with garlic and onions before adding it to the stew. The pakbet is richer, and does not need any sahog of pork or hibe. But one thing is constant - much as I try, it's hard to eat it without rice.

Kai -- been eating Ilocano pakbet for ages but just recently learned how to cook it from my Mamang. Layer the veggies I heard from her.
~Clar

Yay, Ilocano pakbet with vinegar? Now that's weird! But on second thought, it probably takes the place of the tomatoes, which I love, so it's not so weird after all!

i just tried this today, putting in white yam for the first time. surprise! it was the best part for my daughter. sweet!

Manilol ak ed writeup mo! It's been a while since I had YOUR pakbet version, which indeed was our version back in Lingayen. For me, it's the simplest but tastiest. Yum!

I wonder why I've made do with the usual "kalabasa" version for so long... Must be the "official" Metro Manila recipe. :-) Gotta be involved in the kitchen more!

Hi, Ely. That's probably a result of having a "bi-cultural" family now? ;-)