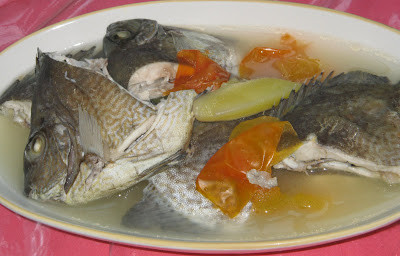 [Malaga fish in broth with ginger]
As I've mentioned in my previous post about malaga, this delicate fish is best cooked with minimal intervention, and in the shortest time possible. It is commonly just boiled in wash water from rinsed, uncooked rice, with ginger and tomatoes, or with a few pieces of whole pias (kamias) if preference is for a soup with some sour hints.

Anything with a more pronounced flavor will drown the fish' delicate sweetness. In Bugallon it is grilled and eaten with a salad of sliced tomatoes, onions and agamang (salted fermented krill, alamang or bagoong hipon in Tagalog).

All restaurants in Pangasinan specializing in local cuisine - these are usually the seafood places in the coastal towns - serve inselar a malaga, or sinigang na malaga/malaga in soured soup. The ingredients are the same - ginger, tomatoes, perhaps pias, and a stalk of celery, which adds to the sweetness and aroma of the soup.

We were home in Pangasinan during the weekend, so I am fortunate that we will have malaga on the table tonight, in soured broth, perhaps with some prawns, also from Pangasinan, and a stalk of celery, a fitting dish to serve for FaMEALy Day, in celebration of National Family Week, which this year falls on Sept. 22-28. FaMEALy Day promotes the government advocacy campaign "Kainang Pamilya Mahalaga," and encourages all family members to be home early tonight, and share dinner together.
As opposed to danggit that is butterflied, salted and dried, malaga belongs to the fish species (siganus) that is made into lamayo, the Visayan term for daing, or marinated fish, in the Visayas and probably Mindanao. I sampled this in Puerto Princesa, and it was such a revelation - to me who has worshipped malaga my entire life.

Marinated in a mild, white vinegar with crushed garlic, a little salt and some peppercorns, it was the most luxuriantly tasting marinated fish I've ever tasted. It was sublime with sliced tomatoes and agamang, and, eaten with hot steamed rice, makes for a first-rate breakfast by any standard.

I have written previously, in that post about all the fish I ate in Palawan, that I looked for danggit - the butterflied, salted and dried kind - but found only the one-day drying kind which is still full of moisture and so weighs heavily, and is prone to harboring those tiny white worms. 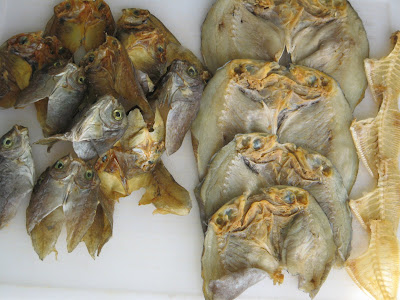 [L-R, Danggit, Daing na Samaral, Tinik ng Samaral]
It turns out I was wrong. That daing was dry, as I've found out with a recent pasalubong from Puerto Princesa. It was heavy because it wasn't danggit - it was samaral, the Visayan version of my beloved malaga , deboned, salted and sun-dried. At a hefty Php300 per kilo (as I remember from the time I was haggling for it), it was significantly more expensive than danggit, especially since the latter is very thin and almost weightless, while the samaral flesh is thickly compact.

But I still favor the lamayo. The daing na samaral is very salty, and is best used with vegetables cooked in gata (coconut cream). What was surprising, though, was the samaral bones - the entire skeleton removed from the fish. It is sold separately (whereas in the lamayo it is sold with the marinated flesh) and more expensively, at Php800 per kilo. The premium paid is for the crunchiness of the bones when cooked. And because it is very, very tasty.