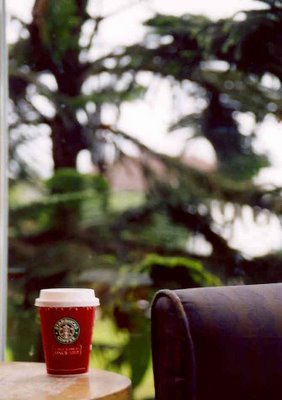 Let me get this straight, though. I don't like Starbucks, and I'm not a coffee-drinker.


When Starbucks first came to the Philippines, I, along with many Filipinos, was attracted to and was subsequently smitten by the hip, coño, sophisticated culture it brought - lazy conversations inspired by the outlet interiors, American-accented cashiers and baristas, overly-expensive cups of coffees previously existing only in Holywood movies and television features, and equally-exorbitant-priced pastries.
All our barkada gimiks then always ended with "Starbucks tayo." And there, the gimik extended to the wee hours of the morning, fueled by caffeine and the fact that a Php100 peso cup and the ability to continue a conversation could last one til daybreak.
Then the outlets became noisy, filling with boisterous students doing groupwork. And I got over my starry-eyed, myopic veiw of the franchise, and realized the coffee was actually bad. As I said, I'm not a coffee fanatic, therefore I don't have quite an arsenal of coffee-drinking experience to relate back to, but I could tell a delicious cup of coffee from a dreadful one. I got to taste Raul Ramos' brewed coffee, which he bragged was the best one around, when he was still at The Sign of the Anvil, and everybody agreed it was divine. And nothing could beat even the cup of espresso I drank at the Fiumicino international airport while on a lay-over in Rome.
My coffee standards are low, to be quite frank. I'm happy with the Colombian coffee served in international, long-haul flights. But at Starbucks? Where you have to dish out a hundred bucks for a cup? The coffees are bland, hot coffees are cold, the hot chocolate is cold as a cat's nose, to use the Pangasinan slang. I don't know what Starbucks has against using steamed milk, but the cold milk they use doesn't usually meld with the coffee, overpowering it and turning the cup tepid. The cakes are dry, the pastries old, although in the early days I loved the fruit tart and the most expensive ensaymada I've ever bought. I can only be happy with the frappès and frappuccinos because they are normally cold and I could console myself with the thought that the ice is diluting the drink that's why it's tasteless.
And coming back from the Cordilleras with arabica beans, I found, to my amazement, that I could brew a good cup, perfectly rounded up by 98% fat-free milk whipped by a frother. All for the price of almost nothing. And haven't you noticed most local supermarkets nowadays carry Tazo teas? For the price of the tallest Starbucks tea cup you could procure a whole box of Tazo teas, and all you would need is hot water.
But Tagaytay Starbucks chose certainly one of the best spots on the ridge along the road to Alfonso. The view of Taal Lake and Taal Volcano from inside the glass walls was breathtaking, to say the least. Stunning, clear and unobstructed 180 degree panorama, the crisp cool air bringing wispy scents of pine. Sit down on one of the few lounge chairs and listen to the chill-out music, and you're in for an unforgettable experience. An experience guaranteed to change your mind about Starbucks, even with a cold cup of supposedly hot coffee in foggy Tagaytay. But only for a while. 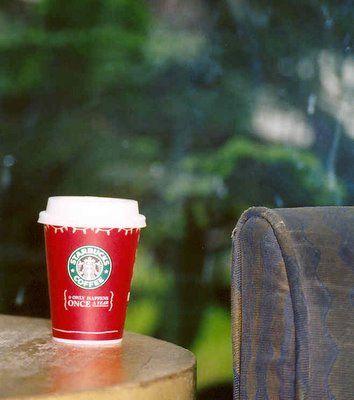 Because, of course I had to come back. And when I did, I found out Kitaro had constructed a branch right below where Starbucks is, significantly downgrading the magnificent view. It became an obstruction, and it's not quite the same.
So now I like best the cottage that Starbucks inhabits inside Camp John Hay in Baguio City, beside the former Country Waffles and near Mile Hi Center. Although it is a little too cramped, and the coldness of the hot coffees is magnified in the cold mountian city.
Truth to tell, I like Seattle's Best better, for their really hot chocolate, chai tea latte, and javanilla. I don't really care for its location at the driveway of SM City Baguio, but at least it's there. I sure hope there's a Seattle's Best in Tagaytay soon.