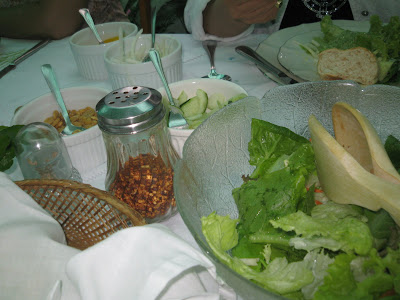 The sky was overcast from Cavite to Makati the other weekend, and throughout the day a slight shower persisted. It was no surprise that when we arrived in Tagaytay thick fog had enveloped the entire city, and visibility was less than a kilometer.

We should have postponed - but we had planned the trip weeks in advance, and we had already made reservations, so we went anyway. It was a good thing we were going to Sonya's Garden, because the entire experience of eating there, plus the food itself, is more than enough to make up for the offerings of Tagaytay itself that we missed showing my balikbayan aunt (who had been around the world, or even twice around it, but had never been to Tagaytay).

I was actually surprised upon arriving at Sonya's - it had been more than five years since I last ate there. Now there's wider space for parking, there's a huge banquet hall so tastefully decorated in Sonya's distinct fashion - still with white cloth netting, huge indoor plants, water fountains, though the floor was new - unglazed red tiles interspersed with hollow lines filled with white pebbles. And the place was all abloom as ever, with more flowers and scents to soothe one after a long, tiring drive made horrendous by Saturday traffic.

I was whining that we couldn't go around the gardens in the rain - but the banquet hall, where we were directed to have our lunch, provided sufficient ambience that we were content to just eat our leisurely way through the fixed menu. Even the comfort rooms retained their characteristic homey, airy feel - all in white, embroidered linens and looking out on the surrounding gardens.

The menu is still the same - pitchers and pitchers of freshly-squeezed dalandan juice serve as a welcome drink as well as a refreshing interlude throughout the meal, salad greens with various toppings and Sonya's special dressing, sesame bread with home-made dips, pasta with two kinds of sauces, and dessert - turon, sweet glazed kamote made more decadent by a slice of chocolate cake for each diner.

The components of the menu change according to the season, although those that are available canned or bottled, mainly imported ones - and maybe considered by Sonya to be an indispensable part of the meal, are constants.

For that Saturday lunch our lettuce and arugula for the first (salad) course came with cubes of fresh mango and honeydew, strips of fresh langka and cucumber, some pop beans and slices of boiled eggs. No edible flowers this time of the year, though. But Sonya's salad dressing is as good as ever. I forgot to buy a bottle at the shop. 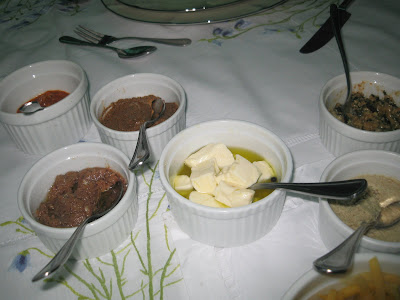 For the next course our warm bread came with cubes of white cheese (kesong puti - curdled carabao's milk) in olive oil, creamed mushroom, anchovy and liver pates, a beautiful pesto and tapenade. We decided early on during this course that we would ask for a second serving of bread, thinking the contents of the small bread basket would not be enough for all four of us. I forgot that from past experience I learned that this would not be a very good decision - we were already too full by the time we got to the next course.

When I once did a feature article on the top four healthiest restaurants in and around the metropolis for a health magazine I first thought of including Sonya's Garden. But that time I had only experienced eating there with just one or two companions, and I thought the sole prospect of finishing humongous bowls of greens and pasta was rather unhealthy. For of course I had taken into consideration the Filipino propensity - and my own nagging tendency wrought by how I was trained at the table - to finish food on the table. Anyhow, it would be wasteful not to finish up food served for you to eat, especially at a restaurant, so I excluded Sonya's Garden from my list.

Last Saturday we were four adults, and the contents of the huge bowls proved not that much among us, though they still filled us to near-bursting - what with the dalandan juice and all. And the extra serving of bread. 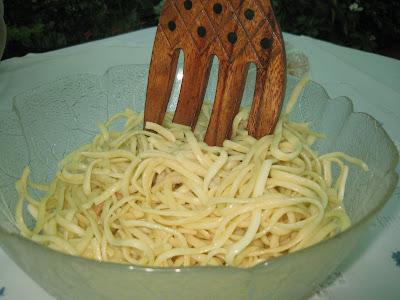 Our pasta was linguini cooked perfectly al dente, which was very filling indeed. It was served with a pineapple-shaped wooden serving ladle that caught the eye of my non-dining little daughter. 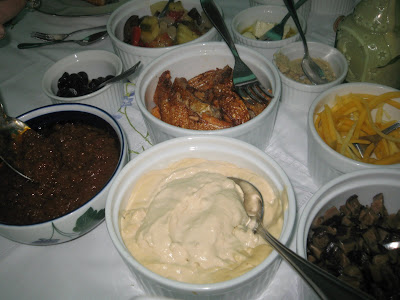 The pasta came with chicken in cream, capers and black olives, some ratatouille, a chunky and sweetish tomato sauce, melon slivers, sliced fresh shiitake mushrooms, and to my husband's delight, a bowl of fried slices of fresh salmon belly that was refilled and refilled. The salmon replaced the steamed, shelled shrimps that featured during my previous meals at Sonya's. Healthier, I suppose, though I object to the frying. 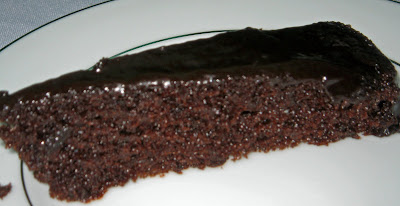 Sonya makes a good chocolate cake - a new addition to the menu from my last meal there - and it is just as well that it was added, because it has been said that chocolate relaxes our stomach muscles, so that we could have a little more space for more dessert. At Sonya's Garden I would advise everybody to have their cake and eat it, too, so that you won't have to forgo the other excellent, local desserts included in the menu - turon and sweet kamote. 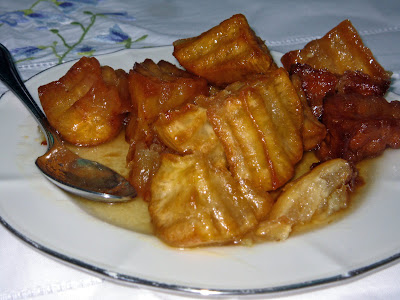 Wedges of kamote in a fragrant, sinfully sweet and lemony syrup, crunchy to the bite and then your teeth sink into the soft, mushy inside. We would have taken home containers of these had they been on sale. 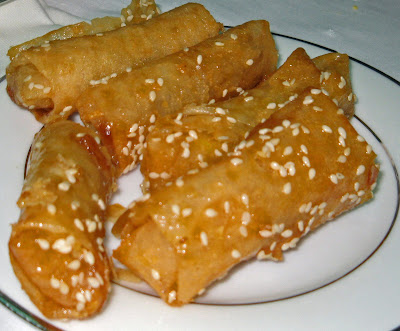 Thin rolls the length of your fingers of sesame-coated, sweet turon spiced up by ripe langka. Ummmm. Both local desserts not to be missed!

The last thing to be served is tarragon tea - hot water infused with fresh tarragon that is present at the bottom of the cup. Very aromatic and sweet-tasting, the hot drink will aid in digesting everything that was served and eaten at Sonya's Garden.
Sonya's Garden
Barangay Buck Estate, Alfonso, Cavite, Philippines
Restaurant Phone No. 639175329097
Reservations 639175335140
Email: info@sonyasgarden.com


Directions:
Go through the main Tagaytay road, through downtown Alfonso. About five kilometers on there is a road going down right after the Royale Tagaytay Estates (to your right). Take this road and just follow the signs - the gate to Sonya's Garden will be to your left.