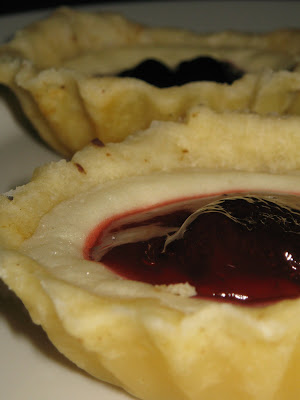 On our way to Tagaytay last weekend, along the Sta. Rosa-Tagaytay road, a companion commented that there are some mean cheese tarts at Rowena's.

I was still groggy from the nap I had just indulged myself in during the ride, so I just filed that information in my mental archives. It didn't get a good reception there, though, as I've grown wary, and weary, of the quality of goods from roadside pasalubong shops. And about cheese tarts - let's just say I'm not particularly enamored of them.

Leaving Tagaytay we took the same route going back, and I was indifferent. Normally, I would be breathlessly be on the alert, fearing to just even wink for fear of going past a food shop I intended to drop by.

But I hadn't been too keen on getting some cheese tarts then, as the back of the vehicle was already crammed with beef, fruits and vegetables, plus some thousands worth of marigolds in a variety of colors, ylang-ylang saplings, eucalyptus plants, four seasons and a variety of herbs.

The driver, though, ceremoniously eased the vehicle onto Rowena's patio, so we had no choice but to file out into the afternoon heat and into the store, so as not to disappoint him.

Getting into the store was a bewildering bit of experience. Maybe it was sunstroke, but I think it was the cacophony of products from all over that greet the customer upon entering, when all I was expecting was tarts.

It was dissonant, finding Virgie's mango tarts and barquillos from Cebu, BongBong's piaya and biscocho from Bacolod, lengua de gato and chocolate crisps from Baguio, pastillas from Bulacan, turrones from Pampanga, and a whole slew of un-local goodies, that for a minute I wondered if I were still in Tagaytay, or in a duty-free shop equivalent of balikbayan goldmine.

Needless to say, I had difficulty finding the actual, busted tarts. It didn't help that the youngish crew manning the cafe at the other end of the room were snotty, and a throng of people were inspecting goodies here and there. Several chillers were leaning on a wall, and that's where I turned my attention to, but the first thing I saw were boxes of tocino del cielo, those mini milk-less custards that's a Kapampangan specialty.

I turned back to the counter - the other half, at the back of the showcase cabinet for the cafe, where pink-and-green boxes were stacked on every available space. Opening a box I caught a view of some anemic mini cheese tarts with strawberry and blueberry topping, at six pieces per box.

I managed to engage a manang in between customers, and asked what the specialty was. It was the cheese tarts alright, at Php160 per box. Despite throwing thousands of money on plants grown in the highlands climate and which were guaranteed to perish in my hands, I wasn't about to part with Php160 then for some anemic tarts. 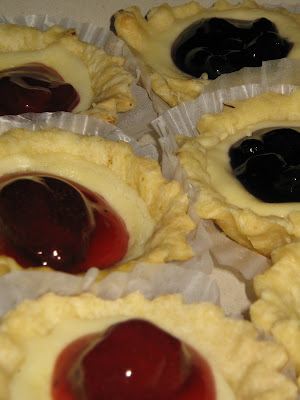 Besides, the toppings were selfishly scanty, just a drop each in the middle of the tart. So I asked if they retailed, and I was directed back to the cafe. I felt I had to buy something, so as not to go back to a dismayed driver.

So I held my patience, and managed to buy a piece each of the strawberry and blueberry cheese tart, plus a chocolate version, because I, like everybody else on the planet, cannot resist anything chocolate.

One piece cost Php35, considerably more expensive than buying a box, wherein a tart is 24% cheaper. But I thought it was a good deal, rather than spending for a box that might get thrown in the trash bin later.

I had been relieved to get back to the van. It was an exhausting ordeal, managing to buy something at Rowena's.

And the tarts? The chocolate was what I threw away, looking so appetizingly chocolatey but not tasting anything remotely chocolate. The cheese tarts were promising - they were actually mini cheesecakes, with strawberry and blueberry topping. The cheesecake was good - satisfyingly salty and creamy.

But the toppings weren't enough. The photos in their website (which I found only now) show topping that covers the entire cheesecake, but not the actual ones, as in the photo above. And I still have a problem with the anemic crust, which was a bit gummy, and was tasteless. If it were made of buttery, crumbly shortcrust, or an oatmeal-based, spiced one, the cheese tart, with more topping, would have been incredible.

But it seems I had been misled. The website showcases the tarts, not the cheese tarts. Tarts in buko (young coconut), mango, apple, ube (purple yam) and pineapple. Now I didn't get to sample those. I was led to the cheese tarts. I would have been more interested had I known Rowena's were known for their fruit tarts.

So, next time. That is, if I could muster the effort, and energy, to go back to that discordant shop.

Go back and try Rowena's tartlets in assorted varieties, although a steer clear of their ube and pineapple version if you are not fond of them like me.=P

They are a breather from the regular buko pies we buy from Collette's or whichever outlet you prefer.=) Just enough to staisfy a craving for buko pie or apple pie without feeling the urge to finish a big slice of the pie version.

I don't like Collete's, either ;-) I only buy buko pie from The Original's, or Lety's, in Los Banos.

Okay, I'll be sure to drop by Rowena's again the next time we're in Tagaytay. I'll try even the ube and pineapple :-)

Their ube and buko tarts are so good. You should've tried those.

I promise I'll try them when I get a chance to go back!

Never taste this awesome cheese tarts.I want to try this one.