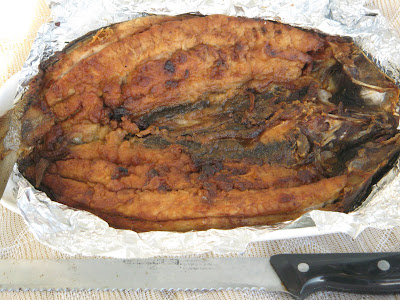 This is an alternative (not a substitute, mind you) to our beloved Bonuan bangus (milkfish from Bonuan, Dagupan City in Pangasinan).

Since we now live in Cavite, bangus (Chanos chanos) on our dining table has become a rare event. I never, ever, buy bangus in Cavite, and elsewhere outside of Pangasinan, for that matter. I've had enough maablir - or tasting of gilik, putik, or briny, mossy, pond mud - bangus that end up in the trash that I just decided to avoid it.

And with the babies and all, braving about 220 kilometers going home to Pangasinan is now too much hassle, what with Cavite and EDSA traffic extending the trip to a good eight hours.

We would need at least four days just for a chance to see the relatives and stock up on food supplies (fresh fish and daing endemic to the province, shells and crabs, newly-picked vegetables not sold in Metro Manila, rice, tsokolate, bread, puto, patopat, latik, and, uh, maybe just about everything!).

The rising fuel prices and the high toll fee at the North Luzon Expressway (NLEX) do a lot in justifying our limiting trips to the long and inescapable holidays. So most of the time we suppress our craving for good ol' bangus.

But sometimes, especially when we go to Tagaytay City, or when a friend plays a few rounds at the Riviera Golf & Country Club, we give in. To a huge, fried, marinated boneless bangus from the LZM Restaurant (Lutong Bahay Specialties), just across the club. 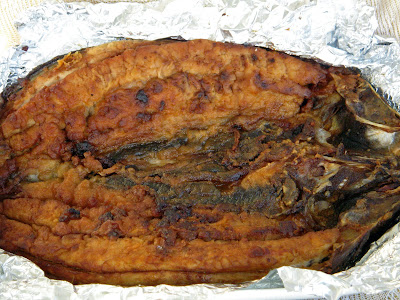 It is not Bonuan bangus - it is not as milky, and not as cream-ily sweet. The fat has decided hints of lansa, or fishiness. And it's huge - more than a foot long (Bonuan bangus is rarely allowed to grow beyond eight inches or so), the flesh so thick, as well as its fat. But it's good enough to satisfy our cravings until we get the time to go home to Pangasinan.

It is well marinated, with toyo (soy sauce) prominent in the marinade (as opposed to the Pangasinan marinated boneless bangus, which is steeped only in vinegar, garlic and black pepper). Before it is fried, it is dredged in flour, so that the flesh does not get tough and chewy, as bangus of this size is bound to be (in Pangasinan, this size is made into relleno, or stuffed bangus).

The scales are not scraped well enough, though, so it is left inedible (too thick to eat, anyhow). It is a bit pricey at Php250 (approximately US$8) a piece. You can get three pieces of boneless Bonuan bangus, each about six to eight inches long, at about Php60 (US$1.50) in Dagupan City. The amount of flesh and fat of all three would about approximate one piece of the LZM bangus.

But then, if fuel prices plus time and effort are factored in, LZM's is one cheap bangus. An accessible surrogate.

LZM Restaurant
Keeps in the freezer for up to a week.

hi! maybe we could lift your post about lzm, it's for a foodguide we are publishing, you will be credited of course... let me know what you think

Sure, Sheila, as long as you keep your promise of attributing credit to this blog.