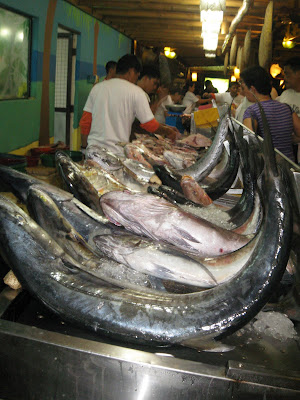 In the scruffy fashion of restaurant dining that is SuTuKil of Cebu, or Breakthrough in Iloilo, or Luz Kinilaw of Davao, the nameless stalls by the beach all over the islands of the country, and of course the centralized, macro version that is Dampa/Seaside in Metro Manila, Bacolod holds its own with an even better version.

18th St. Pala-Pala promises excitement in the intimate encounter with your seafood before it is cooked, providing the assurance that it is fresh, and giving you the choice of ordering what looks best. 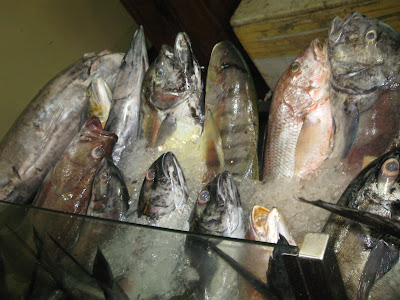 These are not ordinary, diners-are-waited-on restaurants for fussy, royalty eaters. It involves work – marketing for your food, though not legwork, as the market is either right at the entrance to the restaurant, like in SuTuKil, or inside right before the kitchens, which is how Pala-Pala is designed. More legwork is actually needed for the Dampa/Seaside complexes in Metro Manila due to the centralized wet market for all restaurants, but that is made up for by the comfort of air-cooled dining areas, whereas in the provinces most are open-air affairs.

At Pala-Pala (which means the wayside by which seafood is sold) in Bacolod, there is more choices in the variety of seafood at the “market” counter than any other provincial restaurant I have so far been to. In fact within the first hour that we were there many other excellent samples kept arriving. 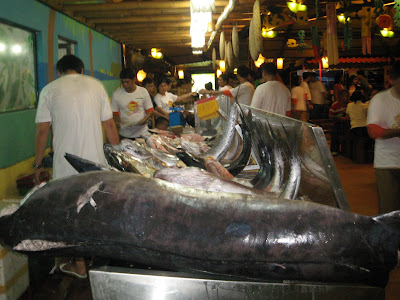 Just arrived blue marlin
But the manner of ordering is the same – view the fresh catch, ponder what you want to have, and how much of one species, ponder some more how you want it cooked, then try to catch the attention of the people at the counter, ask for the price, think over if it’s reasonable and order, or if it’s not reasonable go over the choices again, and repeat the procedure. All these with the accompanying din and bustle as if you were truly in a live wet market with a thousand shoppers haggling for the freshest catch.

And in the middle of it all there may be some argument as to the way the seafood is cooked, because the order-takers may have a strong opinion about some mode of cooking for a particular kind of seafood, but this would be very helpful for those who don’t shop and cook themselves and would be quite happy with whatever arrives at their tables.

At Pala-Pala, like the other provincial restaurants, there are several cooked dishes on display, though if you order these they are served at the same time as those that still require cooking. So if you’re famished don’t think of having them as appetizers, though those that we ordered from the “market” didn’t really take that long to appear on our table.

What I just noticed was the bit of seeming “red tape” in the number of people you’d have to deal with in ordering food. In the others you just approach the counter, point, and order, one person attending you. At Pala-Pala, I dealt with a very excited guy for my seafood, was turned over to a more sober female order-taker for the accompanying rice, any barbecued meats and my choice of the cooked dishes, and then was told to order our drinks from another male server who would approach our table. 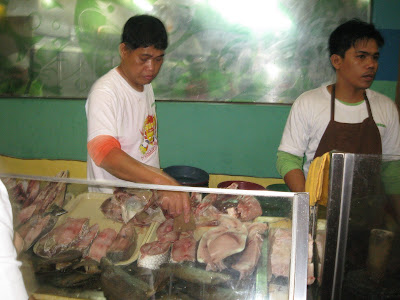 After ordering at the counter the female just laid down the paper where my orders were written down in front of her, and proceeded to entertain the customer beside me. When I asked for a number or something, so our server would know where to take our orders, she said the male server would take care of everything and asked me to find a table. I followed her instruction with some trepidation, thinking my orders would be mixed up with others,’ and particularly because I saw nobody following me, and they had a full house then.

And then my companions didn’t like the table I chose, and we went to another part of the restaurant. But a male server did get there and repeated my orders for confirmation, and we got all our food on the table in no time. So even if it got me confused, they must be employing that procedure or order-taking and serving successfully and are comfortable with it. 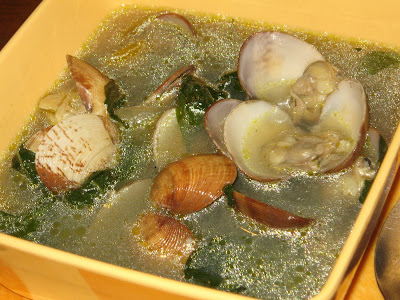 Anyway, on to the food. Nothing fancy like sizzling or anything as I had kids with me, but everything was superb. The ginisang punao (Php55), sautéed local clams in soup, was among the cooked dishes on display, and it could have been served hotter than how we got it, but it was so delicious that I chose to overlook the shortcoming. 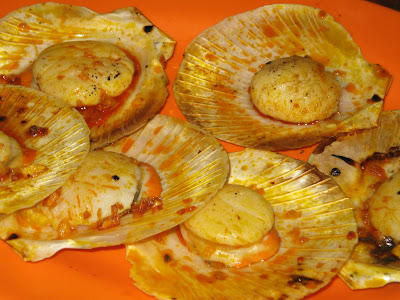 Corpulent scallops baked in butter and sprinkled with minced fried garlic. No matter where I go in the Visayas I always get scallops this way (see Stephanie’s, and Aboy's), the most heavenly way to eat the sweet, plump meat, and I can’t understand why I can’t find any restaurant at Dampa along Macapagal which could cook scallops this way – they always ruin the shells adding this or that. So I always end up buying them fresh and baking them at home myself. Just divine. (Php160 at 5-6 pieces) 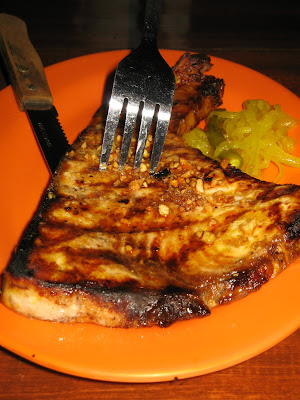 The blue marlin was going for Php569 a kilo, which was quite a hefty price, but as I previously said, blue marlin is a fish I wouldn’t miss for anything in Bacolod, so I got this piece at all of 400 grams and had it simply grilled. Rapturous. 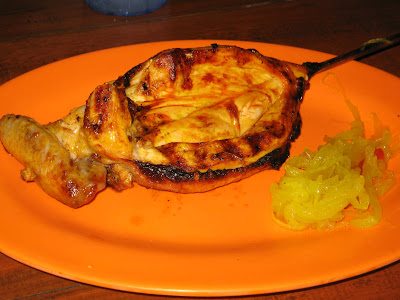 At any dining outlet in Bacolod my kids were adamant in ordering inasal, so even though Pala-Pala is seafood, I included a piece of inasal pecho, and it became a taste test of some sort. Manokan Country tops them all off, hands down, but all the inasal we had in Bacolod City (21, Ribeye Bar, Pala-Pala) were still superior to any other inasal anywhere else - succulently grilled, subtly flavored.

We had mango shake, and a sample of the soft-serve yogurt with toppings, but both weren’t so good. But it didn’t matter, because Pala-Pala is all about seafood. It was just for the best – it would make for a good excuse to have drinks, and dessert, somewhere else, thus giving the opportunity to explore more the foodscape of Bacolod.

Email ThisBlogThis!Share to TwitterShare to FacebookShare to Pinterest
Labels: lama'y dayat (lamang-dagat/seafood), out of town, restaurants

I have a bad experience eating at 18th st. pala-pala. You cannot trust their seafood just like what I ate over there. It seems those seafoods that we ordered where frozen for a long time that you can smell that it's not fresh anymore. I had a stomach upset together with my friends that we vowed not to eat their anymore. One thing I can say, never trust the owner, Nonoy Lopez.

Flies,flies,flies....
That 18th pala-pala have lot of flies flying over when we ate there one time. For me, food were contaminated with those flies that the owner of the restaurant doesn't care at all. Thumbs down for me and my friends for this restaurant. Foods might have been heated up how many times already....That was my 1st and the last time to eat in that restaurant.