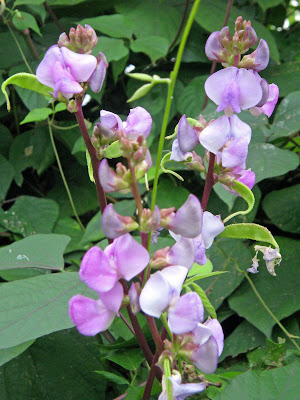 That is the color of the flowers of baktaw or bataw, and the color that runs along the edge of the pods, despite appearing lilac in the photos, while still alive – by which I mean while still attached to the plant. But they turn a paler hue of lavender after being harvested for selling. And of course when cooked, that lovely tinge disappears altogether.

We had stopped by the roadside to buy daing (sun-dried fish) by the fishponds lining the provincial highway that connects Cavite City to the mainland. We had been on our way home, about a kilometer or so from the arch that signals entry into the city. My husband had alighted and crossed to the other side where the various types of dried fish were, when my kids suddenly got excited, pointing to a bush overgrown with a vine that looked like it was laden with tiny, red-violet moths, its shoots jutting towards the window.

“Oh, that’s lovely,” I replied nonchalantly to their cries, noting it must be a weed. But that deep magenta hue seemed to vibrate in the morning sun, the bush looking like it was alight with royal fire, flashing before my eyes even when I turned my back. So that pretty soon I was on my feet to inspect. 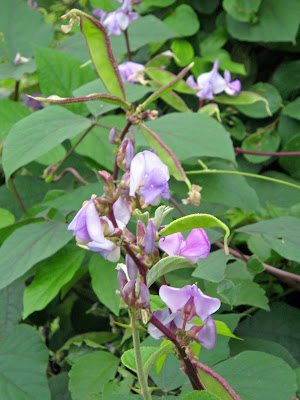 “Ay, rosas ira na baktaw!” I called back to the kids. The girls requested a sprig, so pretty they were, and it was promptly inserted onto the rearview mirror in lieu of a garland of sampaguita. What they lacked in fragrance they made up for with that explosive hue.

But I had turned back my attention to the vine that had dominated its host, whatever it was, for there were small pods among the blooms. They were big enough to be eaten, and seeing no house along that road on either side of the shrub whose inhabitants could claim I was stealing from them, I promptly started gathering the pods. 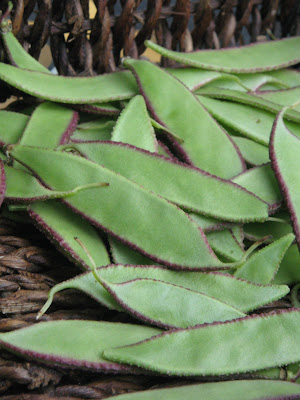 There was enough for mixing in a pot of pakbet we were having for lunch, and they were in the best state – very young so they would come out very tender, and newly harvested so they would have that characteristic sweetness that vanishes over time.

“Mommmeeee, get a cutting! Get a cutting!” the kids yelled. I thought, what now? It turned out they wanted me to plant a cutting in our own lawn, so we would have a steady supply of baktaw, and of those flaming flowers.

I didn’t know if a cutting, or a shoot, would take root, but get a cutting I did, handing it over to the kids. There’s no way I was going to dampen such enthusiasm, and kill sprouting youthful hope and belief in things that grow, with my own adult worldview.

For I had been transformed myself. Or my thumb, rather. Whereas it was as black as a dead root, which used to frequently confront me, murdering an uncountable number of plants that it ought to be jailed, it is now as green as any dirty old man’s mind. My desolate desert, where a hardy cactus would not even survive, is now a burgeoning jungle that’s threatening to overrun our house. 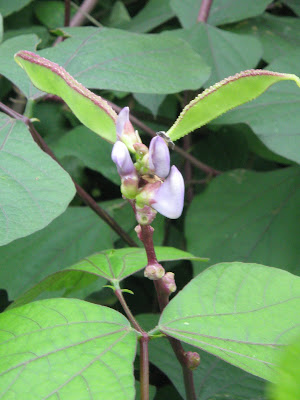 poised to take flight
So we'll see. If that cutting dies, I'll try other ways. And keep on trying.

We eat this in Laguna, my Lola cook with little bit of water with ginger and salt.

Your site is wonderful..so much information, thanks for sharing your knowledge=)

Kai
Based on my readings about this vegetable it is best to eat when the pods are still young but when the seeds are mature it contains a poisonous subtance called cyanogenic glycosides, which sounds like it has something to do with cyanide. For the many uses please click on the link
http://www.stuartxchange.org/Bataw.html
http://agriculturalproductsindia.com/flowers/flowers-hyacinth-bean.html

Cusinera, we also eat it boiled, though not with salt but with bagoong (isda), with ginger, yes, and many other vegetables besides (kahit ano, pwede!).

Manong Bert, that's weird, though I'm sure it's only in small amounts. You ate this when you were back here, no? Anyhow, I'll be certain to buy only the very young pods.

Kai,
Yes I eat this vegetables and actually I plant bataw at my backyard during summer here in NJ. I am not trying to discourage the consumption, but a little bit cautious in eating the mature seeds. If you like to eat, it is recomended to boil it twice since the cyanogenic glycosides will be nuetralized by boiling.
Please copy the URL I attached in previous blog then paste it in the web browser, and you will be amazed on the health and medical benefits of bataw. Again I love to eat this vegetables when specialy mixed with bulanglang ang pinakbet

Beautiful pics, I love this veggie with green papaya, string beans cooked with coconut milk. Pairing it with inihaw na bangus and freshly steam jasmine rice, and eating it by a small hut across the rice field or perhaps by the beach under a shade. It makes me feel like I'm back in Pangasinan.

I'm only now beginning to appreciate all the vegetables that we take for granted in the province. I love this boiled with bagoong in the Philippines or with patis and kamatis here in the US. Great post! ~ Leah

Manong Bert, how do you plant bataw? I assume with seeds since you only plant seasonally?

Tito Jerry, that is a beautiful and saliva-inducing picture you painted. I like my bataw with patani and agayep. With green papaya, too. And yes, don't forget the inkalot a bangus! Pansagpaw, much better!

Leah, don't they say absence makes the heart grow fonder? ;-) But bataw in NY! Now that's amazing, even without the bagoong.