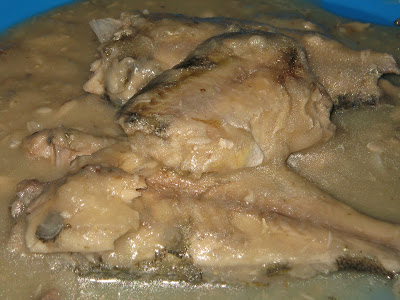 I was buying my week-long stash of vegetables and fruits at my suki at the back of the Cavite public market, when a middle-aged man came in asking for some gabi and sampalok. He explained to one of the sellers that he was going to make sinigang with the bagaong he just bought from the wet market.

I butted in, and asked how he cooked the sinigang. He promptly described the dish - peel and halve a few pieces of gabi, boil in a small pot of water, then mash half of the lot when soft, and return to the cooking pot; boil sampalok, mash and strain, then mix into the pot of gabi; heat to a simmer, then place in the fish that had been pan-fried for a minute on each side; cook for a few minutes, season with salt, then serve.

I thought it was clever, and bought some bagaong myself. I had been a fan of the fish for a while, enjoying it in a mouth-puckering paksiw with sukang paombong. Having it in a sinigang would be a good alterrnative.

And it was. People say sinigang is perfect for hot days, as the sourness refreshes and cools. But this sinigang is thick, and it’s like having velvety soup that’s more suited for cooler weather. We had been having freakish weather lately, very hot mornings then thunderstorms in the evenings, even heavy rains at night. As this thick sinigang is hybrid itself, refreshing as well as comforting, it was the dish to make.

It's a simple sinigang, with just three ingredients, but the viscous soup and the pudgy fish make for a one-dish meal, especially for dinner. I skipped the pan-frying part - and it didn't make a difference. It was so good it has become a part of my weekly menu. 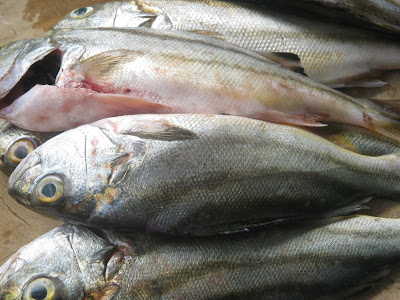 Bagaong is apparently a common fish, not only in the Philippines but also in other countries in the Indo-Pacific area. Its scientific name is Terapon jarbua, with English names crescent perch, tiger-perch and combinations of these. It has also names in many African languages, as well as in Spanish and Swedish, so it must abound in those countries, as well.


Bagaong is the term for the fish in Southern Luzon down to the Visayas, but is called balauling in Pangasinan and banlaongan in Ilokano. I've never encountered those terms until I came to live in Cavite, and at first I snobbed the fish. The scales were so thick and rough, and I had been biased against fish with this quality - I thought they were bland.


How wrong I was! One Saturday I must have been so late waking up that there were only a few choices left in the public market when I arrived. Since I buy provisions for food only once a week, I had no choice but to buy what were available so I could fill up my weekly menu. I bought bagaong, thinking I'd finally try this perennially present fish.


With its thick skin I thought it would be good grilled. Again, how wrong I was. It came out dry, because it had to be grilled a little while longer due to its substantially chunky flesh. And the skin was just coarse, but not as firm and expansive.


I swore it off, until another Saturday, when it probably rained the day before so that a few fishermen were able to go out to sea. So I bought bagaong again. And the vendors said it is cooked in pesa, and sinigang. Poached and eaten in broth, which didn't sit well with me because I thought the fish was too bland for that.

So I had them in a paksiw, boiled in vinegar, peeled and sliced ginger and garlic, whole peppercorns and onions, and siling haba. Eaten the day after, when the fish have steeped in and absorbed the spiced vinegar,   it was absolutely fantastic. The firm, flaky corpulent flesh was a perfect canvass for the trio of sour, garlicky, gingery, enhanced by the heat of black and green chile peppers and the shy sweetness of onions.

I've never looked back. I'd spoon the vinegar onto newly cooked fried rice and sprinkle it with salt, and I wonder why I never liked paksiw when I was a child, why the husband doesn't until now, even the househelp. There's something about paksiw that brings out the inherent sweetness in fish that's otherwise impossible in other means of cooking.

Sometimes I put in tomatoes and a bit of agamang (bagoong alamang) into the paksiw. With tortang talong, or ginisang kangkong, it's a complete hearty breakfast that sustains me the whole-day long. Now I can alternate between the gabi sinigang and paksiw na bagaong.
Posted by Kai at 2:08 PM

hmmm... my kids love paksiw. only trouble is the tinik. but i saw perch at the grocery yesterday. so maybe we'll try that this week.

Lou, this one has spines only by the belly, and they're easy to spot.

Sinigang with mashed gabi is absolutely fantastic. The way you pan-fried the fish before dumping into the soup... I have to try that! Sounds yum. I also have to find out if I can find that fish here in Auckland.