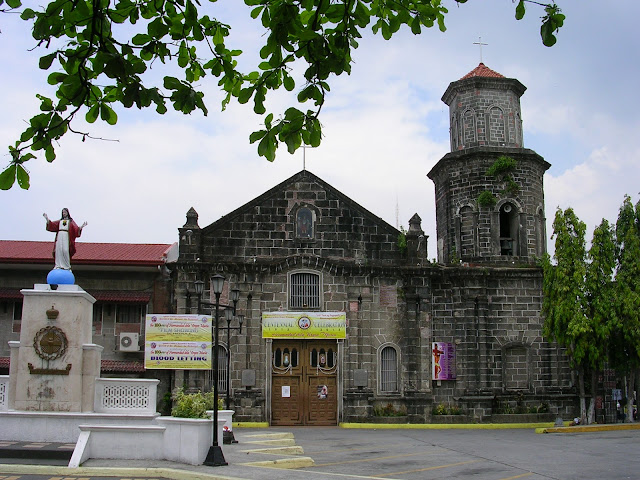 The church in Bacoor has a narrow nave, with very thick outer walls made from large stone blocks, making it dark inside even during the daytime. Being inside the church is like being transported in time - the dark, the cold air in spite of the hot summer outside, and the echoes bouncing on the stone walls let me imagine how it is to live in a medieval castle.

The church isn't medieval, though it's old relatively by Philippine church standards, having been built in 1752. Fr. Mariano Gomes, one of the three priests (the Gom in GomBurZa) executed on charges of leading the failed Cavite mutiny in 1872 that fueled national fervor in Filipino revolutionaries, was parish priest of the Bacoor parish for forty years until his arrest by Spanish authorities. 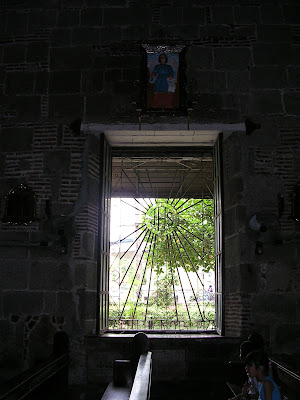 Historical Significance
Bacoor was the first seat of the Philippine Revolutionary Government after the declaration of independence in 1898. A stone's throw away from the St. Michael church, a hundred meters or so back along Gen. Evangelista St., is the house that served as the government's headquarters. It can be recognized with the  Philippine flag that flies on its front and an identification marker at the ground level, but it's not publicly accessible as it is still used as a residential abode.

Pit Stops
- Just by the side of the church, at the war veterans' memorial, is a cart full of pans of still warm cassava pudding that's not to be missed. Sample slices are sold for Php13 each, while a full pan costs Php100. The cassava is unctuously malagkit, as with the creamy, caramelly topping. I rooted for the burnt topping at the edges. 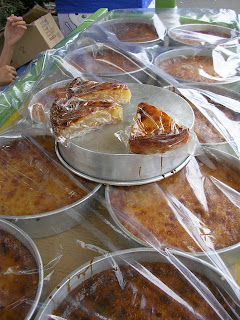 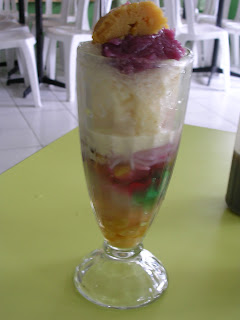 ﻿- Within walking distance from the church is the Digman sitio, where several establishments serve up Digman halo-halo with a dozen ingredients. Walk down the street (J. Ocampo) fronting the cassava pudding kiosk, passing about three corner alleys. Turn left at the dead-end. The halo-haluans are clustered in the near corner. 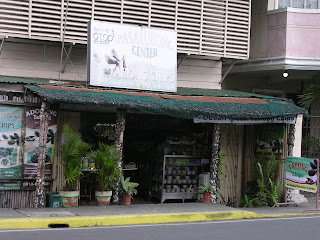 - Farther along Gen. Evangelista Street, just before it turns left onto Mabolo is a pasalubong center of OTOP products. Very Kabitenyo are the tahong and luyang dilaw chips, but there are other flavors - carrot, malunggay, ampalaya, saluyot. Crispy tahong in pouches and bottled adobong tahong and various pickled vegetables complete the line-up.


From Manila
By Private Vehicle
- Bacoor is approximately 17 kms. southwest of Manila, traversing Coastal Road (Pasay City & Las Pinas) and a very short span of the Aguinaldo Highway. Towards the end of Coastal Road in Las Pinas take the fly-over going into Aguinaldo Highway by taking the right turn. After the Shell gas station the Aguinaldo highway turns right then curves to the left. Take the first right corner (Talaba) and drive straight onto Gen. Evangelista Street. You will pass by the Bacoor public cemetery and the Eternity memorial park, and a Ministop convenience store. The church is on the right side, just beside the war veterans' memorial, and in front of the city hall across the street.
By Public Transportation
- Board an air-conditioned bus passing by Aguinaldo Highway (signboards Tagaytay, Mendez, Imus, Dasmarinas, Nasugbu), which get passengers along EDSA from Cubao/Ortigas, and along Taft Avenue, Quirino and Roxas Boulevard from Plaza Lawton. Get off at Talaba, Bacoor a few hundred meters from the flyover at the end of Coastal Road passing by Shell gas station. Board a jeep waiting just at the  mouth of Gen. Evangelista Street, with the signboard Binakayan. Ask to be let off at the Bacoor church.

thank you for this very well written and organized series on your bisita iglesia. cavite is truly a significant province in our history. and your detailed accounts transport readers back to a period filled with noble aspirations and longing for freedom. i have close friends from cavite, and i might go and visit even if it were not lenten season, if only to taste the kakanins in the pit stops.

btw, those directions are some of the most complete i have ever seen, local or otherwise. i especially like the ones by public transportation.

Lou, it took me a month to publish this because of those details, that's why it's so overdue!