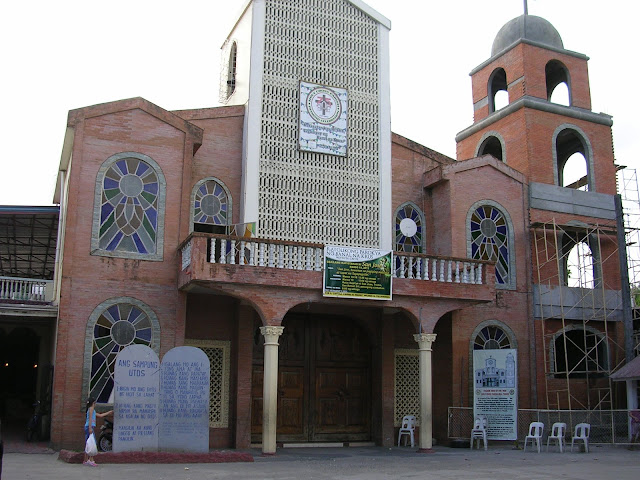 The Catholic church in Noveleta is the newest among all the seven churches in this series, being only about 75 years old. It is relatively small, its size and cozy, homey, modernist feel more apt for a village chapel than the impersonal detachment of a parish church. 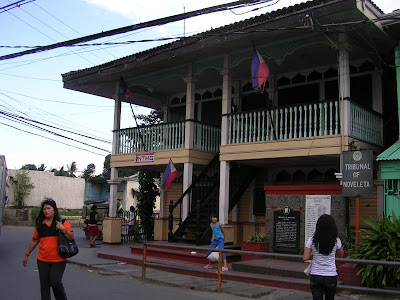 About ten meters back from the Noveleta church, in front of the public market, is the former Noveleta tribunal, preserved from the 19th century. It is historically significant for the entire province, for this was where Gen. Pascual Alvarez of the Sangguniang Magdiwang killed the captain and adjutant of the town's Guardia Civil. Their soldiers were taken as prisoners by the Magdiwang rebels. This event jump-started the indio rebellion in  Cavite,  responsible for making the province eternally shining on the Philippine flag as one of the sun's eight rays. 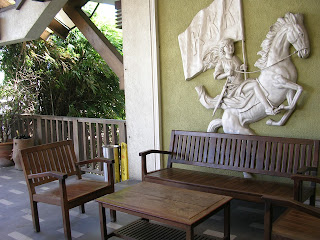 Pit Stop
About 250 meters before the town proper, right at the foot of Noveleta Bridge and just before km.post 27 is a restaurant that was built to pay homage to historic Cavite and the Philippine Revolution. Various historical knick-knacks repose on its walls, and its signature dishes were named after the major personalities in the fight for freedom. A large patio hosting landscaped gardens is an inviting  place to take a breather before the next leg of the journey.

The menu, though, is mostly European, the local country only scantily represented. But the few Pinoy  dishes are all worth checking out, particularly the tuka turmeric, thinly sliced stingray in a thick stew dyed with luyang dilaw and liberally sprinkled with chopped red sili. 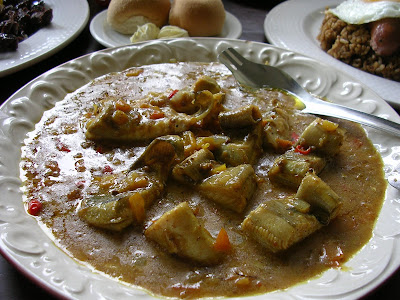 Directions
From the last Bisita Iglesia church - Kawit
About 4.2 kilometers south-southwest
By Private Vehicle
- Turn right from the church and go along the highway. After the Noveleta town hall turn left at the corner where GSIS Family Bank is, into the alley going to the public market and the two-storey former Noveleta tribunal, then turn right. The church will be a few meters on.
By Public Transportation
- At the waiting shed in front of the Kawit church along the Tirona Highway flag a baby bus whatever its signboard is. Get off at the junction after the Noveleta town hall and cross the road into the alley at the right side of the town hall, at the corner of which is the GSIS Family Bank. Walk on, turning right after the tribunal museum. The church is at the right side.
From Manila
By Private Vehicle
- Noveleta is about 27 kms. out of Manila, traversing Coastal Road (Pasay City & Las Pinas), Cavitex (Manila Cavite Expressway), and the Tirona and Magdiwang Highways. At the junction just out of Cavitex turn right onto Tirona Highway, skirting the Aguinaldo House, right then left then right again onto Magdiwang Highway and on to Noveleta. After the Noveleta town hall turn left at the corner where the GSIS Family Bank is, passing through the public market and the tribunal museum. Turn right and watch out for the church a few meters on, on the right side.
By Public Transportation
- Air-conditioned buses with the signboard Cavite City get passengers starting from Plaza Lawton (Liwasang Bonifacio) in Manila, traversing Taft Avenue, turning  to Quirino Avenue, then left onto Roxas Boulevard and then on to the Coastal Road,  Cavitex, and the Tirona and Magdiwang Highways. Get off in front of Mercury drug store/Shell gas station, when the bus conductor shouts "Noveleta!" Walk a few meters on towards the Noveleta town hall on the left, passing by Jollibee then 7-11 to the right. Cross the road towards the right side of the town hall onto the alley where GSIS Family Bank sits in the corner. Turn right after the tribunal museum and walk on a few meters towards the church, which is on the right side.