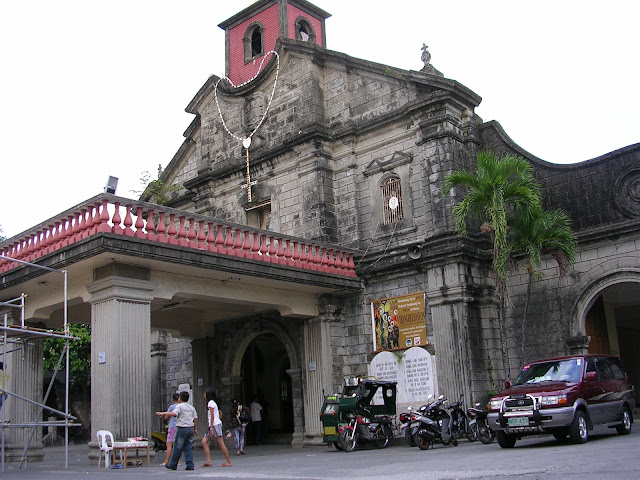 The town of Rosario was named after its patron saint, Nuestra Senora Virgen del Santissimo Rosario, Reina de Caracol. The parish church is the shrine of a miraculous image of the Madonna and Child, said to be an early 1800s painting by a famous Filipino artist, Faustino Quiotang. 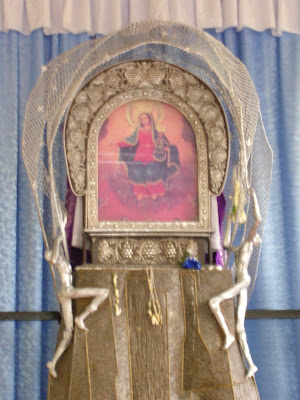 The image is enshrined at the main altar, with a replica lording over a small chapel adjacent to the right nave of the church for private devotions. A steel fishing net serves as a veil over the icon, held on both ends by two fishermen, in a nod to the main source of livelihood for the people in the municipality. Devotion to the icon came about when the crew of a sinking batel during an extraordinarily violent storm prayed to the image which was aboard at that time, and they were all spared, washed ashore in a sitio of the town.

A makeshift chapel made of bamboo and wood was built in the sitio for the image, but legend says some boys who liked to swim at the beach found the image afloat again and again. So the townspeople transferred the icon inland, building a more permanent structure for the painting.

When the devotion to the Madonna grew it wasn't long before the barrio, called Tejero, where the church was built was declared a parish. This was in 1845, and it prompted the Spanish regime to cede the barrio, decreeing it a new municipality a year later.

Caracol is a big celebration in Rosario during the feast months of the Virgin Mary, May and October. There's a fluvial procession, caracol del mar, as well as street dancing, caracol del tierra. The street dancing is also observed in most coastal towns in Cavite, and it's an awesome sight to see middle-aged men and women dancing in the streets carrying a santo.  The dance steps are constant, and it looks like one step forward and two steps backward, that the entourage never seems to go along. But the acceptance of the devotion and its caracol is evident in the way commercial buses full of passengers and private vehicles would stop for as long as an hour during caracol time, as the caracol route is normally along major thoroughfares. 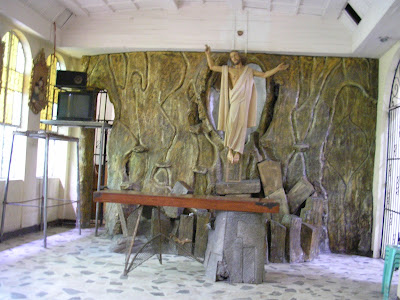 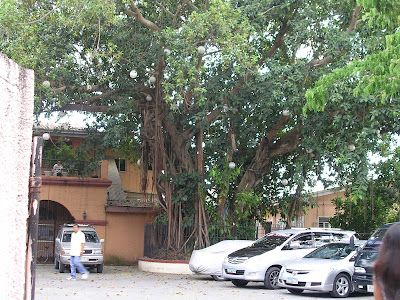 a colossal banyan tree at the church courtyard, in the midst of which is a statue of the Virgin Mary

*With a clean public CR by the multi-purpose hall.

Directions
From the last Bisita Iglesia church - Cavite City
About 10 kilometers south-southwest.
By Private Vehicle
- In Cavite City go back  along Burgos Avenue, passing by McDonalds to your left, and straight out of the city arch and onto the Manila-Cavite Road. Turn right at the junction in Noveleta onto Marseilla Street. Go straight along the road - the church is at the back of the town plaza to the left just before Gen. Trias Drive, about 3 kms. from the junction.
By Public Transportation
- Walk back to Mercury Drug in front of the pathway to the Cavite City public market, and board a baby bus with the signboard Tanza/Salinas. Ask to be let off at the Rosario town plaza, and cross the street to the back of the plaza where the Rosario church is.
From Manila
By Private Vehicle
- Rosario is about 30 kms. out of Manila, traversing Coastal Road (Pasay City & Las Pinas), Cavitex (Manila Cavite Expressway), and Centennial Road (EPZA Diversion Road). At the end of the Centennial Road by the junction in General Trias turn right onto Gen. Trias Drive. Go straight, passing by SM Rosario, then turn right by the town plaza onto Marseilla Street. The immediate right corner by the perimeter of the town plaza is the alley leading to the Rosario church.
By Public Transportation
- Air-conditioned buses with signboards Naic/Ternate/Maragondon get passengers starting from Plaza Lawton (Liwasang Bonifacio) in Manila, traversing Taft Avenue, turning  to Quirino Avenue, then left onto Roxas Boulevard and then on to the Coastal Road,  Cavitex, and the Centennial Road. Get off at Gen. Trias at the junction of the highway, and board a baby bus with the signboard SM Rosario/Cavite City. Get off at the Rosario town plaza just a few minutes after SM Rosario. Walk to the back of the town plaza to the Rosario church.

The Other Churches in the Coastal Cavite Bisita Iglesia

actually po, yung nasa gilid po ng simbahan ay replica lang po ng patrona, the original imgae is enthroned in the middle of the main altar of the church. Since its holy week, the our lady was placed down the altar (elevator po ang tawag ng iba) =)

Hi Covie, thanks for the info!