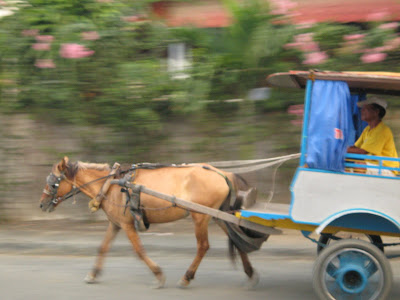 There was a period in my childhood when I shuttled back and forth between Pangasinan and Isabela, first with my mother, and through subsequent years with my younger siblings as they were born.

We spent summers there, and holidays, too, running around gravel-lined roads in a settlement surrounded by bald mountains. It was exotic, because I had grown up in the plains of central Pangasinan, with bamboos and coconut trees the only tallest things to obstruct a 360-degree view of the horizon, and mountains are indistinct shadows in the far distance.

We stayed in the settlement most of the time, watching American movies and cartoons, biking, playing table tennis, and generally running around, though we were careful to go inside at twilight to avoid trampling on malevolent invisible spirits that might be lurking about at that hour.

The only time we ventured out of the settlement was to watch a Tagalog movie in Santiago, which had not yet been made a city then, two hours northward. But additional trips were not really looked forward to, because getting to Isabela from Pangasinan and back involved debilitating 7-9 hours of dusty bus rides along zigzag roads that were much worse than Kennon's or Marcos', so we were just content to stay put to recover from the ordeal. 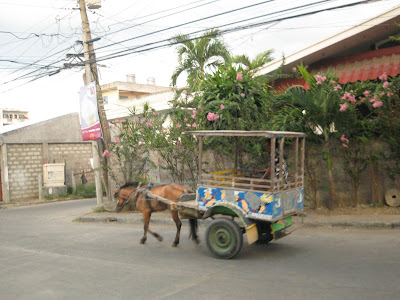 Early into my teens we stopped going to Isabela. The next time I was there I was already in my third year in college, and I had to take final exams early because I joined my university civic-oriented organization on a week-long bus trip traversing Region II, stopping at every major city and provincial capital starting from Bulacan, with the ultimate stop in Tuguegarao, for an outreach program sponsored by the region.

Afterwards, when I was already working, I'd go on sojourns to Ifugao and Kalinga-Apayao, alone or with friends, to recharge. Since bus trips were the only means of transport to reach that part of Luzon, those retreats involved countless hours of road trips.

Lately I had started bringing my kids, who I decided are already old enough and calm enough to endure endless hours of sitting in a bus. Onboard showing of movies are much help, and those sleeper buses with double decks to spend the night in stretched out are a Godsend, even though they're so cold we have to lug thick blankets in our backpacks.

My husband tells me his ultimate adventure trip is for the entire family to drive to Banaue and Sagada dragging a trailer. But since that would require me behind the wheel for half the trip, and traversing the much dreaded Halsema Highway, I haven't been much too keen to make it real.

But I can say I have had the ultimate northeastern Luzon road trip, over and over again, and it's not about to stop. I've seen how roads improved, how houses and buildings filled towns, how buses transformed into airconditioned, self-sufficient things I never want to get off of. Which is fortunate, because the abysmal condition of pit stops has not improved one little inch. 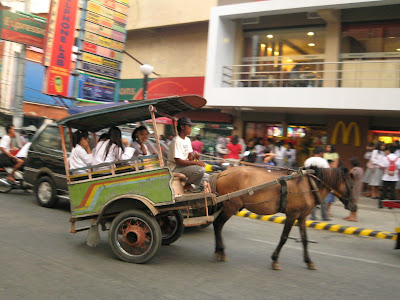 It was a shock, though, to see from the air a vast flatland with a wide, lazy river snaking through it, as I took my first ever plane ride to northeastern Luzon. Cagayan Valley, after all, is the country's largest valley, the biggest palay producer after the rice basket that is central Luzon.

And that is because of the country's largest river, the Cagayan (local ancient name Bannag), fed by three mountain ranges, generates hydropower in two dams, and which drains into the sea in the northernmost portion of Luzon.

And more shocked I was still, when I got to walk and drive around, to find an almost untouched area of the country. I mean there were outlets of fastfood chains, yes, but there were no souvenir shops, no tourist traps, no cafes and pizzerias.

I think the best proof of this relative virginity was the kalesa, or karitela (horse-driven cart). They were everywhere around Cagayan, but not as a preserved remnant of a cultural past that you hop on for a brief experience and a photo. No, they were functional, serving as a mode of transport. And people actually rode them.

They were different from other kalesas I've known (there were still functional ones in my hometown before I was of school age, but not one exists today) - they looked easier to mount. The wheels were smaller, and there were seats around the box-type carriage. 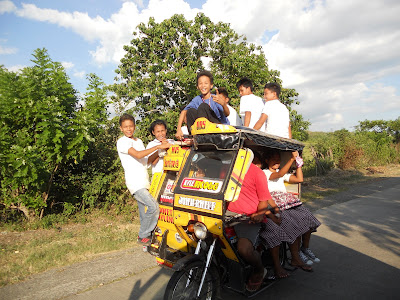 Of course, engine-type means of transportation exists there, too, alongside the kalesas. I caught these kids on their way home from school, merrily cruising along the national highway in a tricycle, enjoying the breeze. 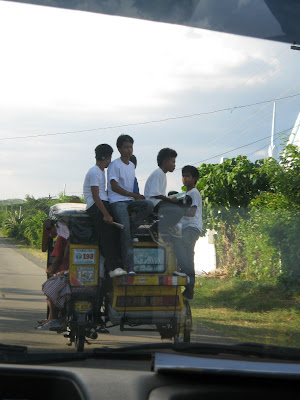 I noticed, though, that girls were mostly inside the tricycle. I remember hoisting myself up the top of a jeep in Bontoc after it has passed the town proper marker, to find that only men were there. They didn't mind, though, so I had the time of my life reveling in the almost unobstructed view of the mountains we were passing. 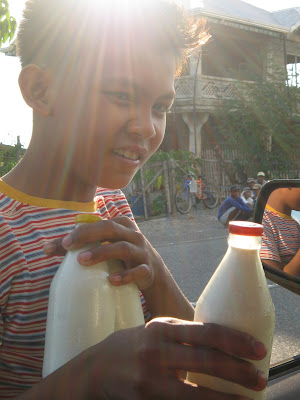 Endless rice fields extended to the horizon on both sides of the highway. It was fallow season, so carabaos were out to pasture. Loads of them, in various stages of maturity. And lining the roadside were tables full of fresh carabao's milk, peddled in glass bottles that used to contain gin.

Since fresh, untreated milk is highly perishable, I bought only a few bottles, which were promptly kept in my hotel's kitchen refrigerator until my flight the next day. Glass bottles are not allowed in airplanes, so I had to transfer the milk to my plastic water container, which I always carry with me for needs such as this.

Carabao's milk is a precious commodity in Metro Manila, so I buy it anywhere I can find it. I use it for making yogurt, and leche flan, and in baked goods requiring milk. Good for pastillas, too.

And that was the whole point of a road trip. Much as I enjoy a bus ride (even a plane ride nowadays), more joys are to be had at the end of the trip. New discoveries on every trip, and a whole new experience defines each subsequent one.

this is a part of the country not very many outsiders have visited, including me, so i appreciate a well written personal account like this one about isabela and the cagayan region. thank you.

Lou, I was surprised because I thought the area has been overrun by tourists. In my travel books Cagayan is a must for white water rafting at the Cagayan River and for spelunking. So it was a pleasant shock to discover it's still as isolated as it was when I was a child. No malls even to speak of. Which is a good thing, for me.