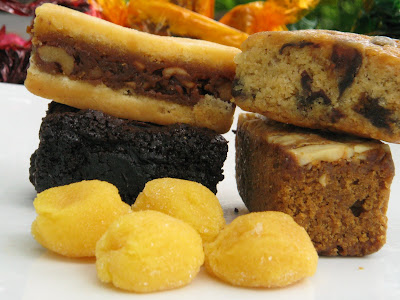 I just couldn't leave the series on my trip to the Cagayan Valley region without mentioning the pastries I brought home as pasalubong to the kids, in addition to the carabao's milk pastillas and chicharabao.

I've mentioned previously that I didn't see any souvenir shops in Tuguegarao City. It was just providential that just across my hotel there was a grocery store, where I bought the milk candies and chicharon, and adjacent to the hotel was a bakeshop filled to the rafters with all kinds of sweet things imaginable.

With me on the trip was a colleague who also had three kids and was browsing around for edible things to bring home. Apparently she had heard a lot about the bakeshop, from others who had been to the city on previous trips, and from locals because she had been in the city longer than I.

So in we went to "window shop," but the looking-around-for-a-few-minutes plan extended to a full hour of real shopping. We were so surprised by the variety of the goods on sale, and lured by the low prices, that we went on a binge, justifying that it won't hurt much if the things turned out inedible.

But they did turn out more than edible, much more than passable, and very much value for money. For where else can you buy bars of fudge brownies, food for the gods, butterscotch and walnut bars at Php8-12 each, and actually feel happy eating them?

Those walnut bars, in particular, were awesome. The crust sandwiching the walnut filling was buttery, and there were real walnuts in them. I know the price of the nuts in these parts so it's a bit hard to comprehend how a bar can be sold for Php10.

The brownies were rich and moist - very satisfying indeed. The butterscotch and date bars tasted better than what you would expect for their price, given that they exceeded in taste the many offerings around Metro Manila that are about four times more expensive.

And those sweet yellow delights of eggs and milk rolled in sugar - yema balls - left me groaning in pleasure. And afterwards groaning in agony that I will never taste the likes of them again for a foreseeable time in the near future.