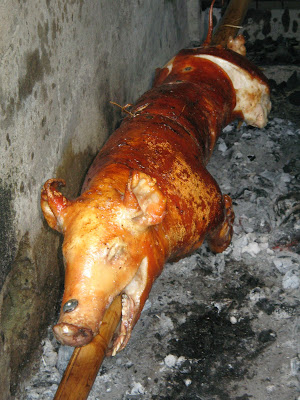 My eldest daughter turned seven years old during the holidays, and we hadn't planned on anything. Among my three kids she's the one who hasn't had a proper birthday party - one wherein she celebrates the day with fun and pomp with her own set of constant friends.

It's the disadvantage of having been born between Christmas and New Year. This is aggravated by the fact that she was born to a transient family living in an area full of transient families - nobody is around to invite during the holidays.

So we've had many different ploys to celebrate her day without a party - we've gone to watch dolphin and seal shows, the circus, the dinosaur exhibit, which crowd the metropolis come Christmas season, gone swimming.

She's spent half her birthdays in a show, half at home in Pangasinan. When we're in the province we invite whom we could, but it's just not the same as sharing the joy with close friends.

I knew seventh is a milestone year, and I had been thinking of several ways of celebrating it, sans a party. But I couldn't plan on something more definite because the husband's schedule was unpredictable. When he had been able to take a week-long vacation, we planned to go home to Pangasinan, then celebrate in the form of a grand road trip up north. 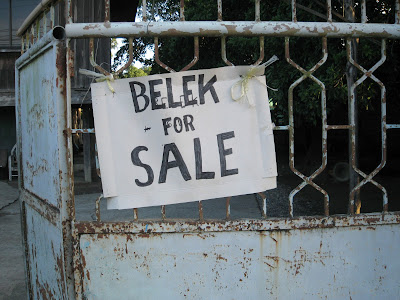 But when we got home the lolas promptly remembered that it was her milestone birthday, and offered to roast a suckling pig for a party. The newborn piglets from our last visit were apparently big enough to sell, and big enough for lechon de leche.

The girl got excited, so we canceled our road trip and stayed put to plan a party. 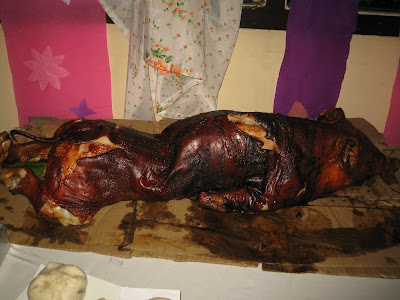 I have had many lechons in my childhood, for it was usual to have pigs roasting in makeshift pits in the backyard during baptisms and other big parties. I even have a photo in my Sunday dress beside a huge, bronze impaled hog, half the entire frame hazy with smoke. But this was my first lechon de leche roasted at home.

Contrary to expectations, the kids were ecstatic and had no qualms about watching the entire procedure - from the slaughter to the skinning, to the cleaning and de-gutting, and on to the roasting, getting in the way by insisting they turn the pole themselves. Along with cousins, they vied for front-row seats to the spectacle.

They also accompanied the slaughtered pig as it wound its way around the house and by the perimeter of the property, trailing drops of blood in the ritual paterter. The term literally means to let trickle, and it is a ritualistic blood offering for life-affirming occasions such as birthdays and baptisms, but is also used upon the construction of anything new - houses, bridges, buildings.

Which is one of the major reasons for the slaughter of an animal during these events. The feeding of guests is a purpose lateral with the ceremonial intent.  I don't know if this was rooted in our ancient animistic traditions, though I'd like to think it's more akin to the ritual shedding of animal blood as an offering to God (or gods) somewhere in the Old Testament (as well as in Greek mythology). In Cavite they have the same ritual, called alay, using white-feathered native hen which is buried after slaughter. 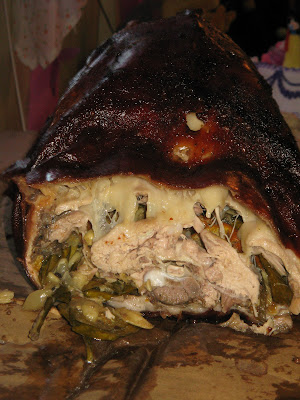 The lechon de leche was fabulous.  The skin was crisp, and there was minimal fat. Owing to the size of the suckling, the meat was flavorful in all parts, and was soft and succulent. This was incredible, because very minimal seasonings were used, and everything was natural. 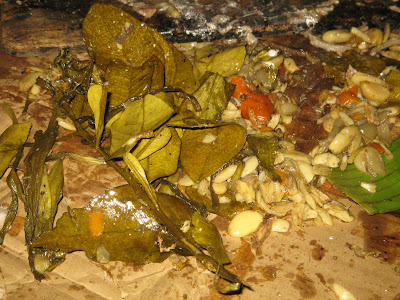 The dressed piglet's entirety, including the stomach cavity, was bathed in pineapple juice, then rubbed with salt. The stomach was stuffed with lots of peeled garlic and banana leaves, tanglad (lemongrass), pomelo leaves, and calabuaya leaves, which were all gathered from plants growing around the property. A few kiat-kiat were also thrown in. 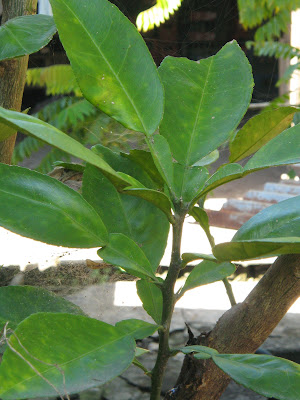 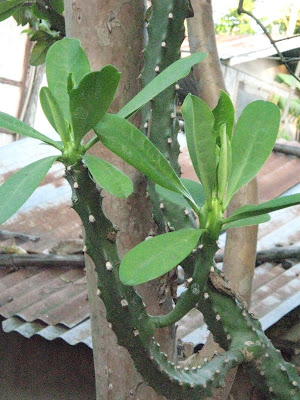 This is the calabuaya, a kind of cactus, whose leaves are odorless and contain a lot of sap. But when cooked, they make for an aromatic stuffing. I understand the leaves are also used in lechons in the Ilocos provinces.

It's interesting to note that the name calabuaya comes across as a composite word made up of the words calab and buaya. In the Pangasinan language the term for climb or to climb is calab, and buaya is the general Filipino term for those reptiles in Congress, err, swamps. So the local name of the cactus denotes a climbing crocodile, which seems appropriate due to its erect nature, and those nodes along the edges of the stalks call to mind the raised ridged skin of the reptile.
﻿ 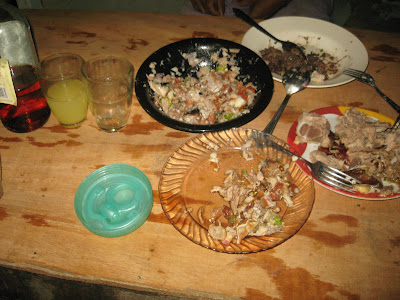 from snout to tail

Early on in our marriage, during a birthday of our eldest child, I had asked my husband if I should prepare pulutan. He had replied that I shouldn't be asking, because it is a given, even for a children's party.

It's not difficult, actually, because when you slaughter an animal, a lot of parts not served to guests can be made into pulutan. From the suckling pig there was enough for dinuguan, spiced igado, stewed pig's feet and tail, and sisig. Sharing the drinking table were the uncles who roasted the piglet and made buns, some fathers of the children-guests, and husbands of those who helped in the cooking. 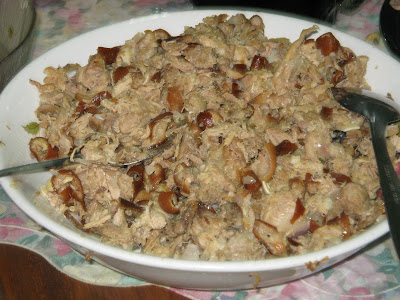 The sisig was the best I've eaten in my entire life, and it wasn't even served on a sizzling plate. Served warm from being heated in a pan without cooking oil, it consisted of the chopped skin and meat from the piglet's head mixed with a lot of chopped onions, kalamansi juice, and salt and pepper.

I didn't join the drinking after the party, but I ate this with rice on the dining table. I ate a lot, and I ate a lot of rice. And that is saying much from me, because I generally avoid eating pork. It was that good. It didn't have the cloying factor because there was minimal fat, if at all.

I wonder when lola's sow will give birth again. I hope it does two months before my birthday.

Lechon in its "un-made-up" state, whoa! I hope it tasted better than it looked. I miss biting into lechon's crispy skin, which is almost always the most sought-after part of the roast.:-)

This post just made me drool and crave lechon. The sisig looks wonderful, too!

Happy birthday to your daughter, Kai!

Thanks Iska, it was a unique experience among her peers.

i miss doing our own roast at home during occasions; we’re ordering organic lechon ever since our discovery of it. :)

Januarylau, I was planning on organically raising my own pig to roast, but my attempt was thwarted by the elders claiming the pig won't grow and fatten enough purely on slop. Sigh...