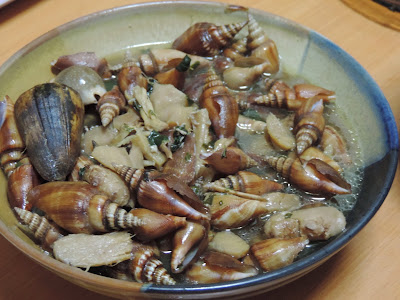 By the three-step open-air façade of the Cavite City wet market, vendors sit on stools selling fresh catch from around the area on makeshift tables or bilaos. The offerings here are distinct from those who sell further in, in rented tiled stalls, who are resellers of seafood delivered from Metro Manila and elsewhere.

I always go to the local seafood area first when making my rounds. The variety always amazes, and lets me know what’s in season that day, unlike in the interior stalls where the fish are the same week in and week out. This is where I find malabanos, talimusak, lawlaw, local tilapia, alimasag, tuako, fresh dilis.
Most of the offerings are guaranteed to be freshly caught, too, still bright and translucent and slimy to the touch.

There was a whole lot of still-breathing medium-sized fat bisugo last weekend, which we had in a tomato-soured broth for Sunday dinner. But the surprise of the day was pails of sikad-sikad, which I’ve only had in Palawan, and which appeared very rarely in Cavite from the time I came to live here more than six years ago.

Shells commonly do not make frequent appearances in Cavite, and when they do it is only for a few days. They do it by species, too. So one day it is the black trumpet-like ones, a day much farther on it is small clams. Bisukol appeared once or twice.

I rarely buy, because I am intimately acquainted with just two species – bisukol and lukan. The one time bisukol appeared I bought a can-full’s worth, mainly for sentimental reasons - I haven’t had bisukol for years and years.

But when I got home I got a scolding from the husband, who litanied about the questionable origin of the shells, etc., etc. We cooked them, but they remained untouched, and I never bought bisukol again.
Last weekend my elder daughter tagged along to the market, and on first sight of the sikad-sikad suddenly remembered our Puerto Princesa trip, and so begged me to buy. The vendor, a suki, assured me that the shells came from the sea, and the nearby sea at that. I inwardly cringed at that, for we are surrounded by Manila Bay, and everybody knows what empties into it from all the densely populated cities of Metro Manila.

But caught between my daughter and the vendor, I had no chance. At Php40 a kilo, I thought it won’t be a big loss if the shells do not get eaten at home.

So a kilo went into our bayong, and we promptly cooked them for that day’s lunch. The vendor confirmed what most other people say that the best way to have shells is in gata, but I butt in and asked if it’s possible to have them in a gingered broth. She consented, and that’s how we had the sikad-sikad. Sauteed with garlic, peeled ginger  and a lot of sliced onions, then poured with boiling water and allowed to cook for a few minutes. I brought home some bunches of malunggay as well from the market, so we plucked some wee leaves and put that in the broth.

The soup was terrific, and we were transported back to our Palawan holiday. The Kabitenya sikad-sikad proved to be as difficult to get as the Palawena ones, though they were a bit bigger, and we had to break a lot of toothpicks (the rounded bamboo ones, the flat kind is useless) to get to the meat. But it was as rewarding, the snail flesh sweet and softly gummy, more than making up for the puny size.

I hope sikad-sikad season lasts longer than the other shells’, for I’m hoping to buy again.

i followed the links to sikad sikad and bisukol. amazing how much good information you have documented through the years!

i do hope that the market for seafood can find ways to reclaim the confidence of the buying public.