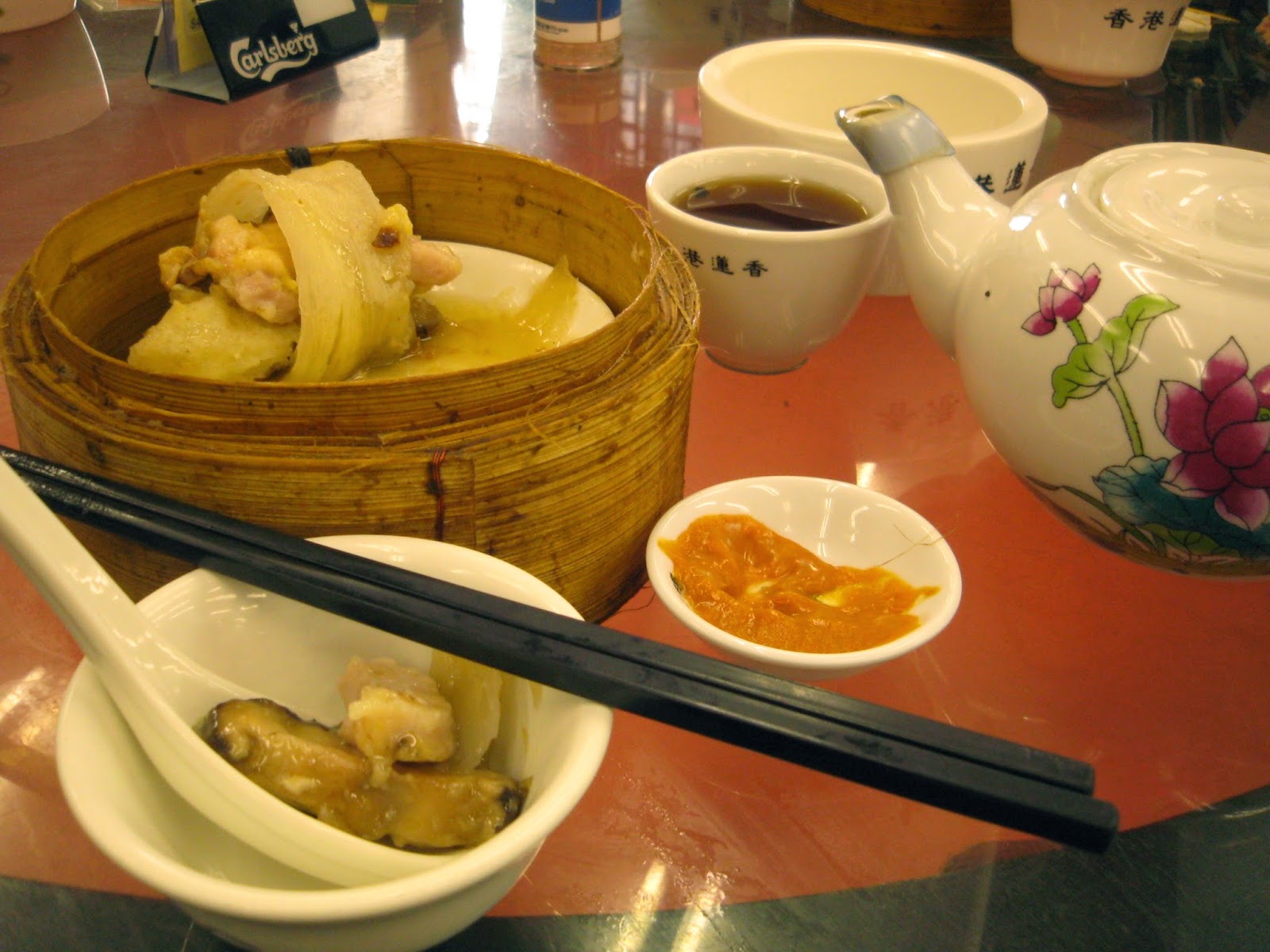 The original Lin Heung tea house in Wellington Street is one of the oldest Hong Kong-style restaurants in the city, having been established in 1926. It is said, however, that the waiting lines there are legendary.

It was getting late, and I had eschewed Yung Kee for the lines. Naturally I didn’t want to face another wait. So I went to the relatively newer outlet, Lin Heung Kui, in Sheung Wan, which was conveniently located near my hotel.

Like what happened during my first visit to Tim Ho Wan, I almost missed Lin Heung Kui. There was no signboard, or maybe there was, but it was in indecipherable Chinese characters. I was tracing the street number, but where it should have been was a very narrow stall with a traditional Chinese pastry shop inside. 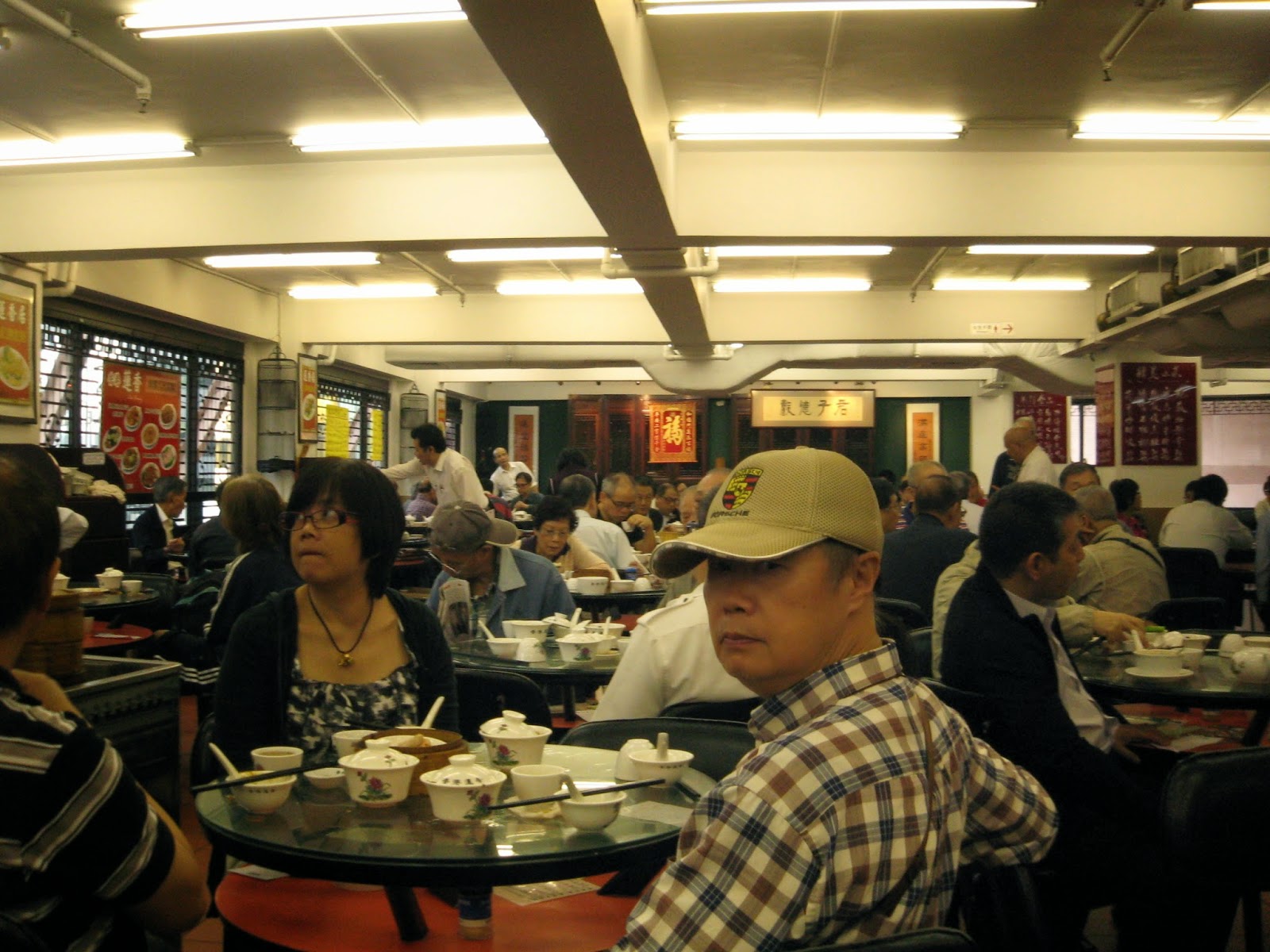 Good thing I went in and asked, for I was pointed to the elevator. It slipped my mind that Lin Heung Kui occupied the 2nd and 3rd floors! So I took the narrow, noisy and run-down-looking elevator, and once it bumped to a stop and opened, there was before me a long hall full of noisy diners from my mother’s generation. What looked liked entire clans crowded around tables eating whole ducks, which turned out to be one of Lin Heung’s specialties (8 Treasure).


I felt like a kid, but the liveried elderly gentlemen by the elevator gestured me to come in and directed me to an empty table. They promptly left me, but soon I was approached by an English-speaking master who handed me the menu. I said I wanted dim sum, but I was told that dim sum was served only until 4PM, in true yum cha fashion. I felt aghast, remembering all the nightly dim sum I had eaten at Tim Ho Wan.

It was my last night in Hong Kong, but I thanked the foodie gods that for my return flight to Manila the following day I had booked one in the evening. So I resolved to come back for yum cha the next day, but since I’ve been twice thwarted for dinner already that night I decided to sit it out and have dinner at Lin Heung Kui. 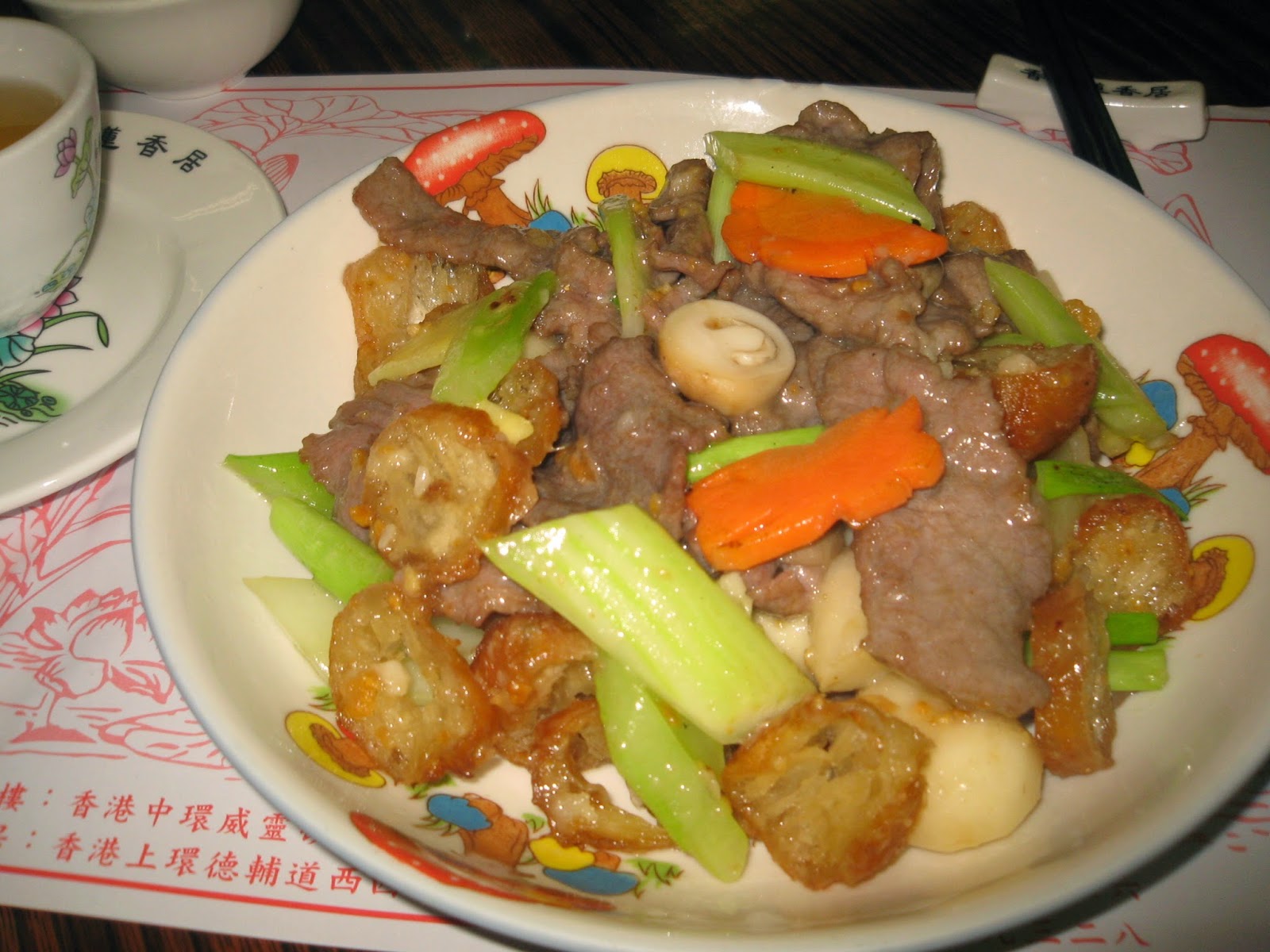 It was a difficult decision, for like most Chinese restaurants, dishes at Lin Heung Kui were meant for sharing. After several minutes of discussion with the English-speaking waiter I settled on the stir-fried beef with celery, water chestnuts and crullers, whose photo was plastered on a window and whose size looked manageable.

But the dish was a terrific decision. It boasted contrasting textures, with the soft, flavorful beef slices, crunchy celery, dense chestnuts, and the chewy crullers. I finished the entire serving, and my appetite was whetted for my yum cha.

The next day I made sure to walk around the blocks and blocks of dried seafood market that defines Sheung Wan, so I could work up an appetite. At noontime I proceeded to the now familiar elevator, squeezing in with some lolos (grandfathers/elderly gentlemen) toting several pieces of what looked like shopping bags.

When the elevator opened the noise was several decibels higher than the night before, and the hall was bursting to the seams with diners and several dim sum carts snaking around the tables. The ambience was short of frenetic, but soon staff hustled all of us to a table just by the cashier with only just one diner, and I was thankful that I got to sit down rather quickly. 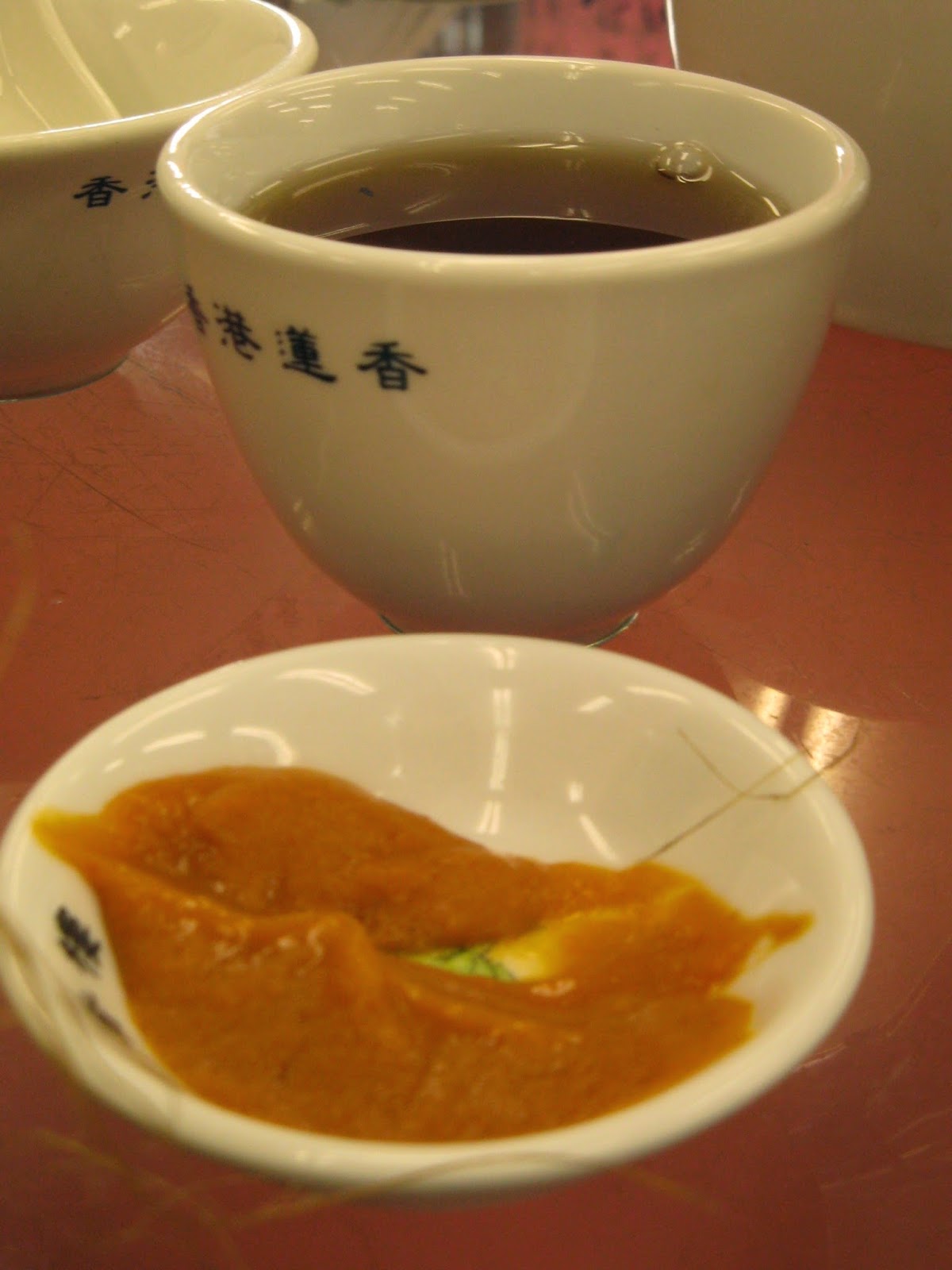 The first thing to land on the table were tea cups, followed by the ritual pouring of freshly brewed tea. I was busy absorbing the atmosphere, and trying to locate the dim sum carts, which were invisible at the moment, that I failed to see that the tea cups on the table weren’t alike.  I only became aware after I noticed that waiters kept coming back to our table, pouring what I took to be tea from the huge kettles on the cups of my elderly dining companions. 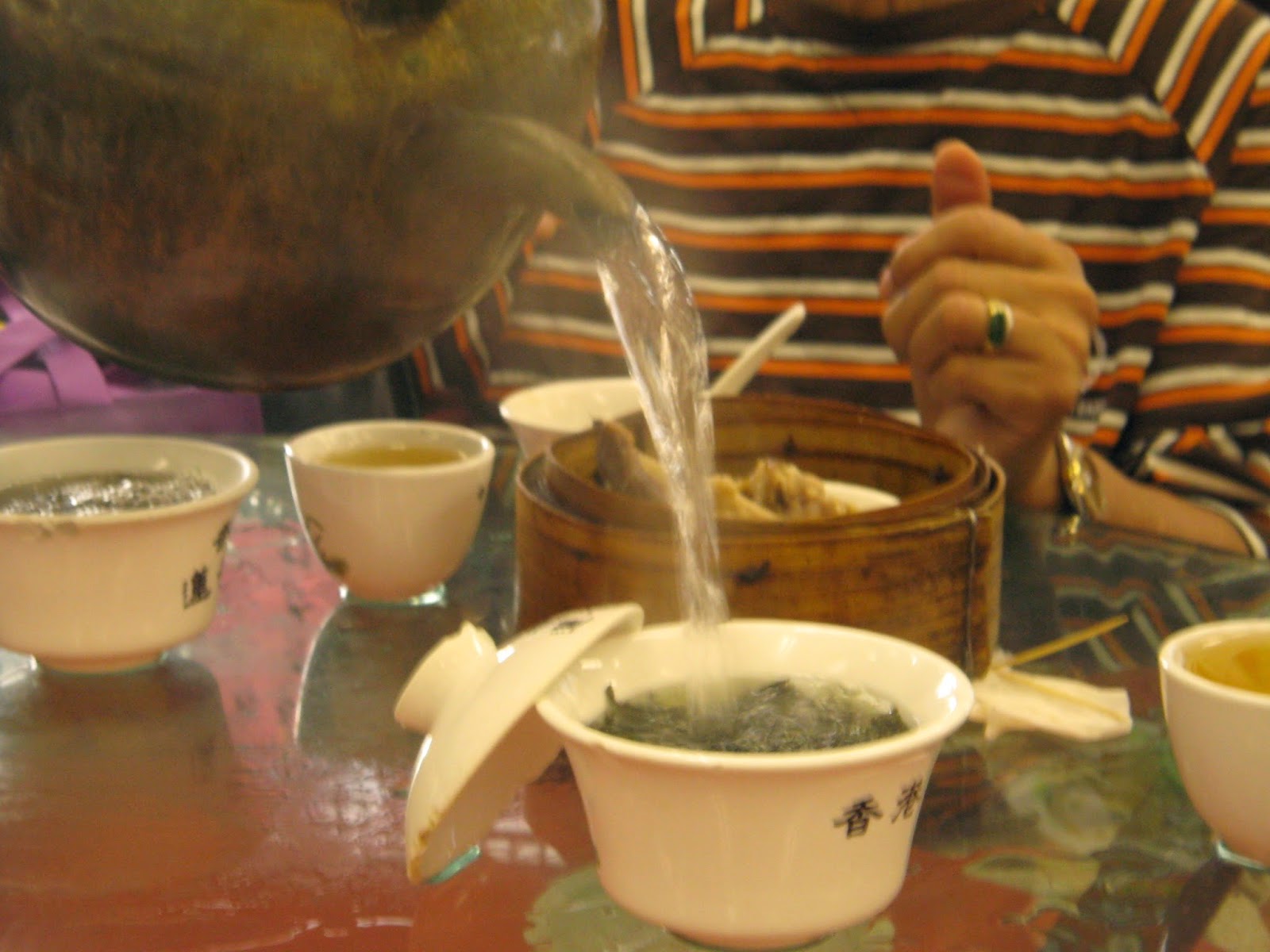 Turns out there was a ceremony to it all. Loose tea leaves were spooned to a cup with a lid, then a waiter came to pour hot water on the leaves.  The elderly diner proceeded to agitate the leaves in hot water with chopsticks, stirring them around. Then the cup was covered, and the liquid was emptied to another cup that was  a bit bowl-like in size. The waiter came back with the kettle, and again poured hot water on the tea leaves.

The diner again covered the cup. After about three minutes he poured the tea on another cup, smaller this time yet still bigger than my own tea cup. After a minute he started sipping the freshly brewed tea. The waiter regularly came back to our table to replenish the hot water, replacing the leaves after several brews.

I remember reading somewhere that the first pour of the hot water was for cleansing the tea leaves. One of the diners at our table even had his tea leaves “washed” several times. 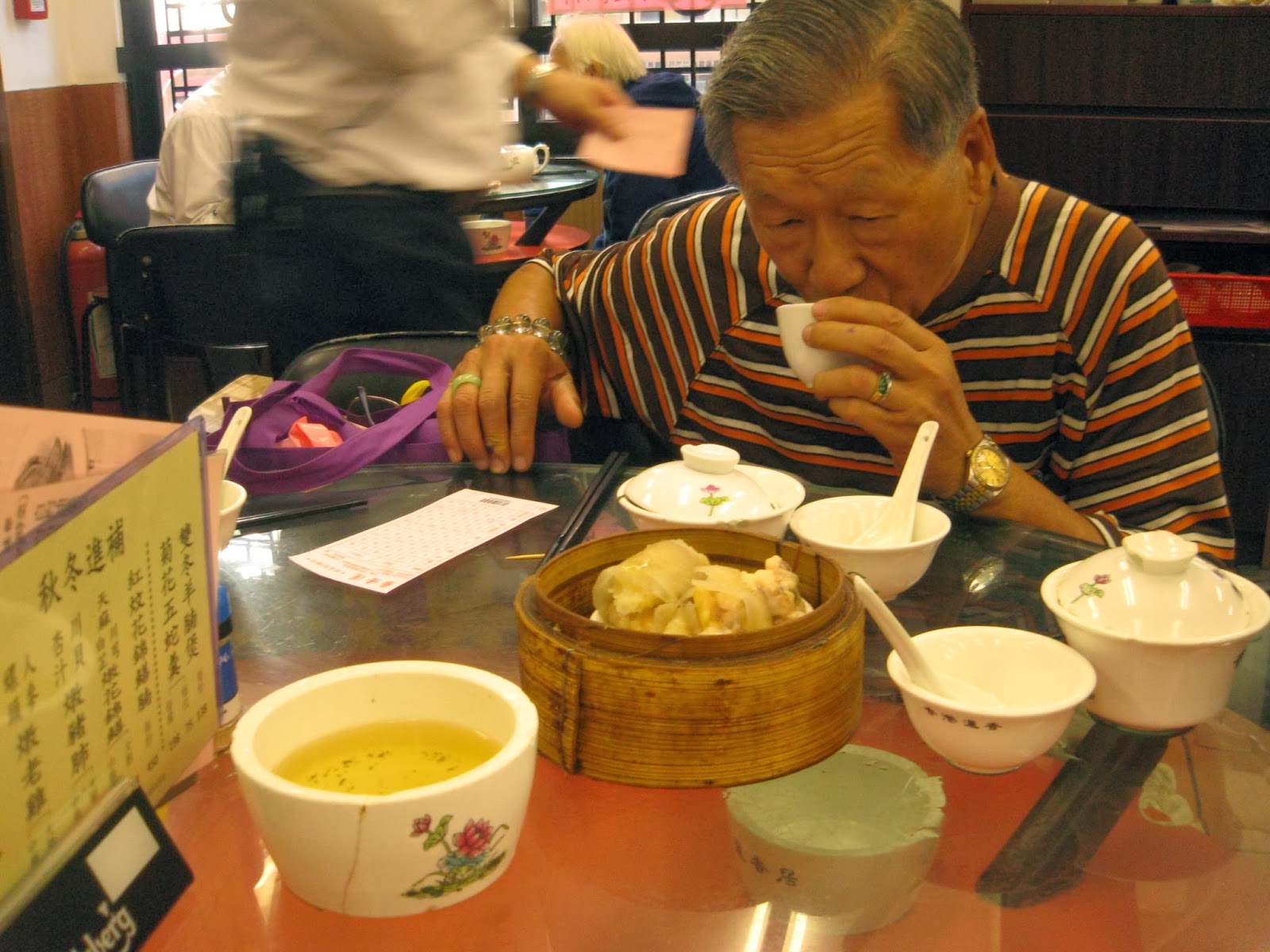 I remember reading somewhere that the first pour of the hot water was for cleansing the tea leaves. One of the diners at our table even had his tea leaves “washed” several times.

It was fascinating to watch, and I thought I should have felt offended for having been denied that ritual. But instead I felt privileged to have witnessed it. Although my father’s family was of Chinese descent I could never have been mistaken for a Chinese, having taken my looks from my mother’s side. And my father’s Chinese roots were so far removed that they don’t even acknowledge it, much more practice anything Chinese. 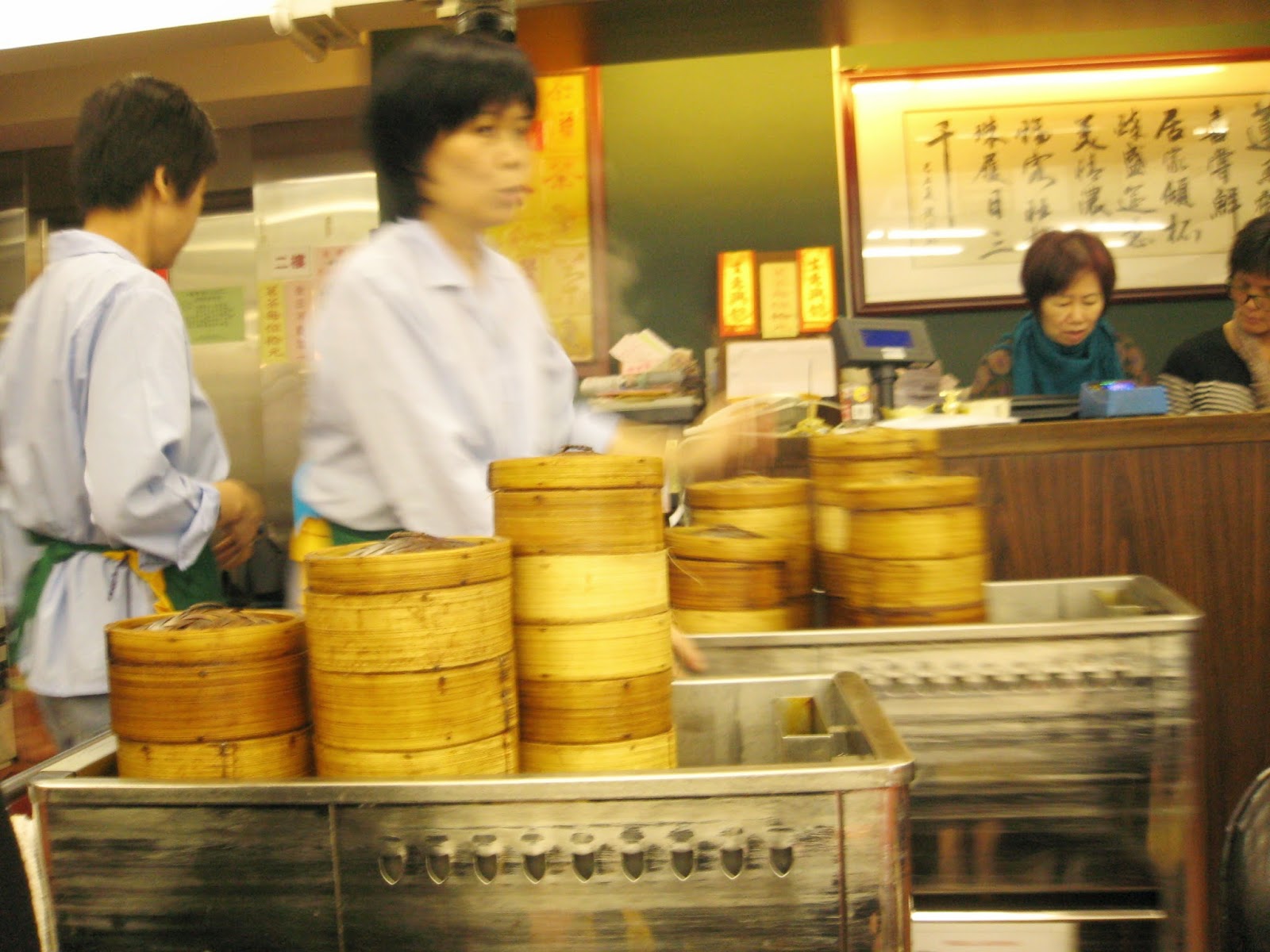 So I was poured tea already brewed at Lin Heung Kui, not the tea leaves for my own brewing, in a small cup. But on to the food. Roving carts pushed by female staff had, by this time, reached our table. All I could manage to do was point to which steamer baskets I wanted, which was a simple enough task, but, because of the language barrier, it proved to be daunting. I couldn’t even identify any of the steamed dim sum, and nobody could tell me what they were. I couldn’t delay the carts for my perusal, as many other tables were waiting for them. 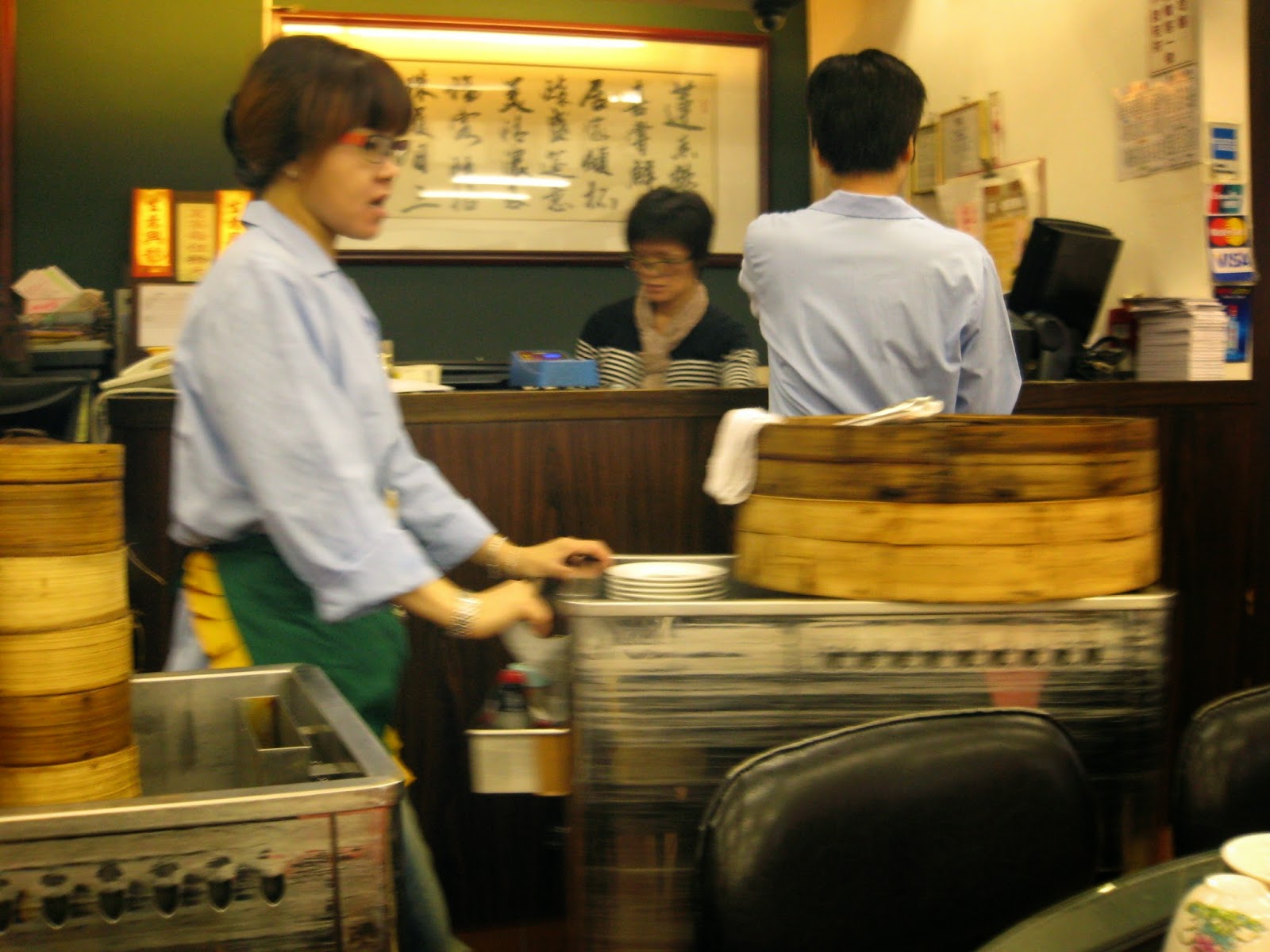 So what I did was to get those that didn’t look familiar. There were many, but I couldn’t try them all, for there was only one mouth to stuff it all in. There were other carts, too, for the fried dim sum, and for dessert, which was Malayan cake – similar to Binan puto – in a huge bamboo steamer basket. 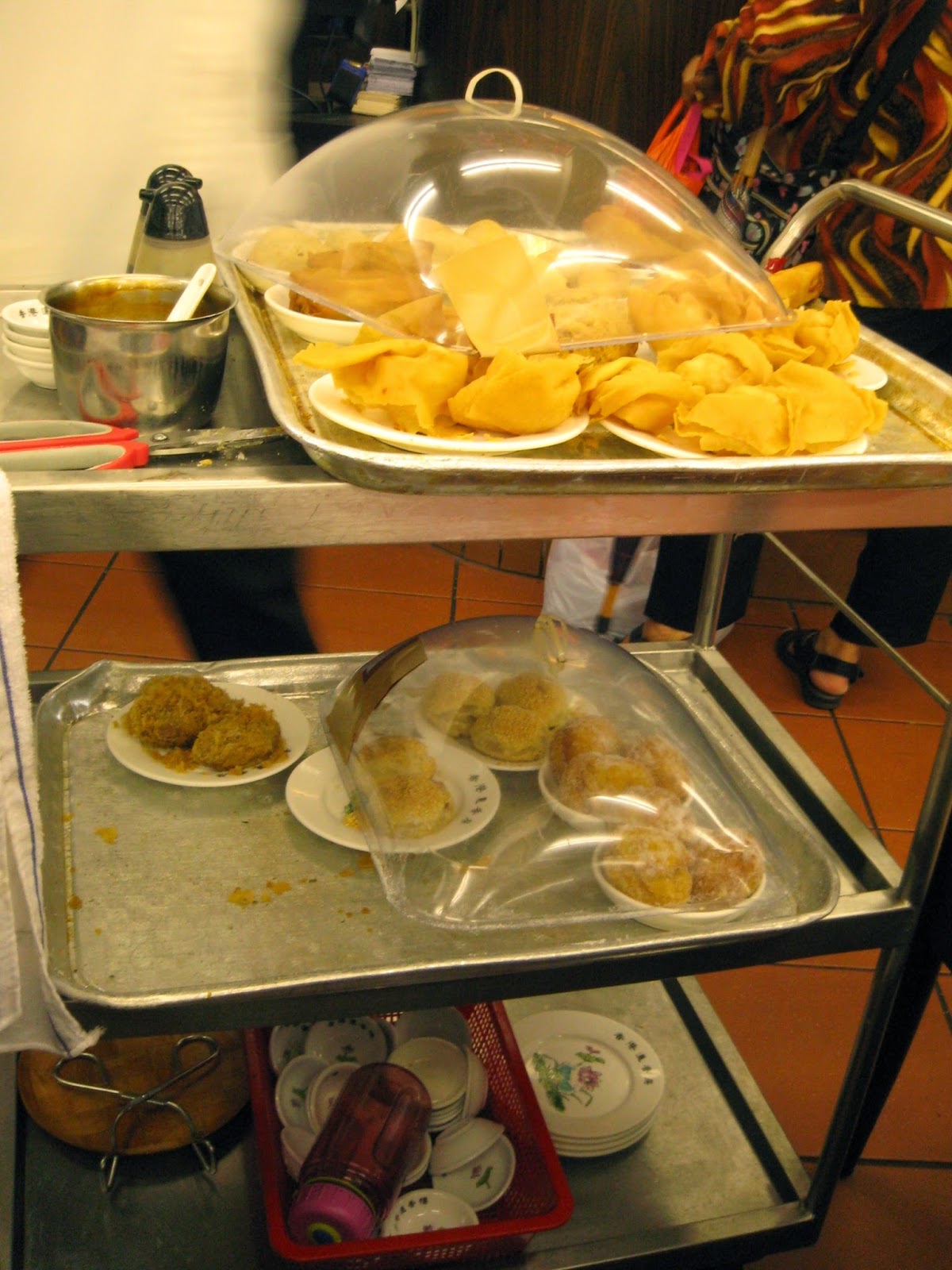 The baked dim sum were quite exceptional, but I didn't bother to sample the fried ones, which all looked like fortune cookies. 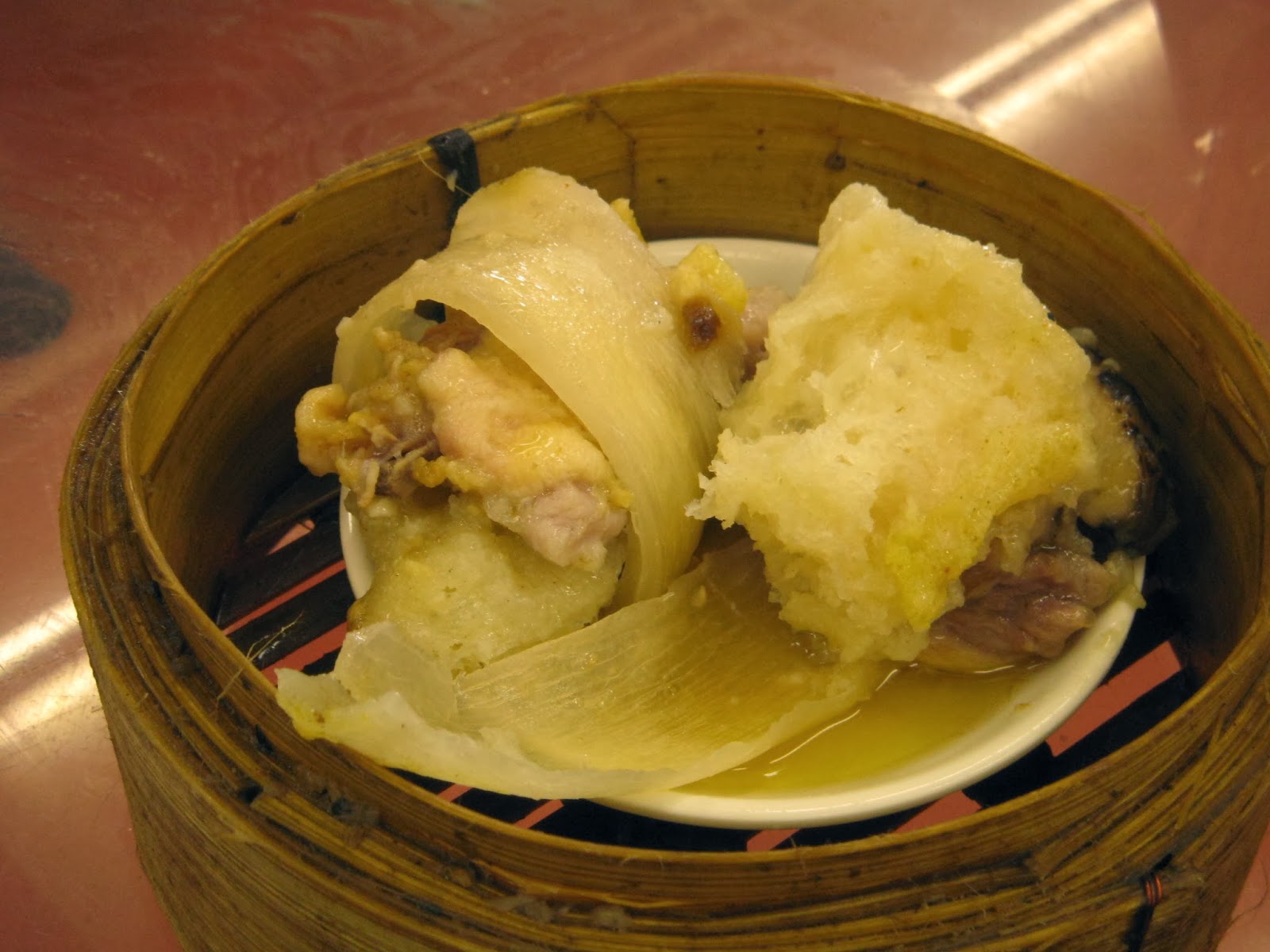 This was a personal favorite. I don't know its name, of course, but it had steamed chicken, mushrooms and fish maw, wrapped by a very thin slice of a rootcrop (huai shan) - that was like a very chewy gabi - then topped with a portion of dried seaweed which I saw by the sackful hours before at the dried seafood stalls. I have read that this is a very unique dim sum rarely served in other Chinese teahouses. 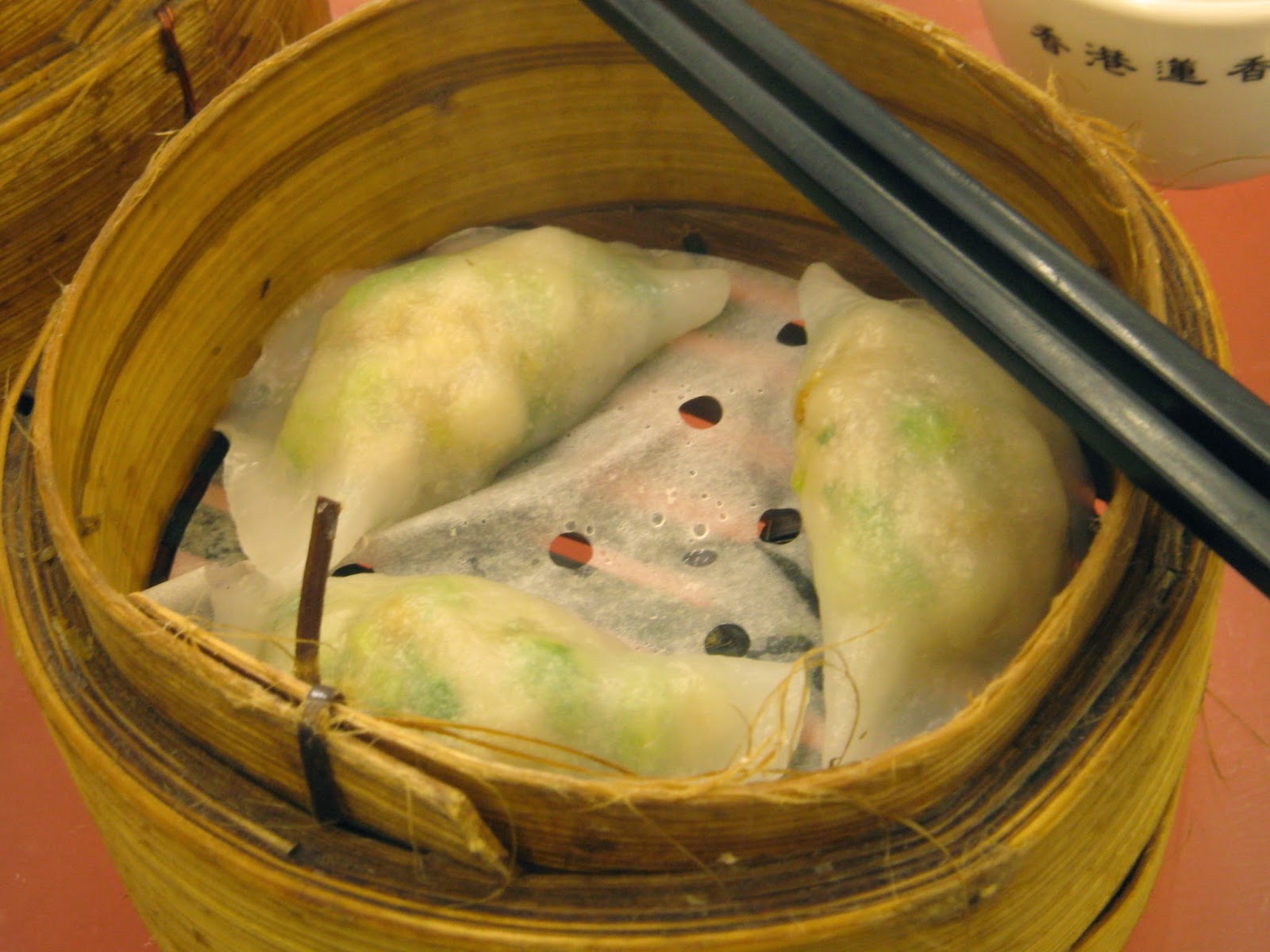 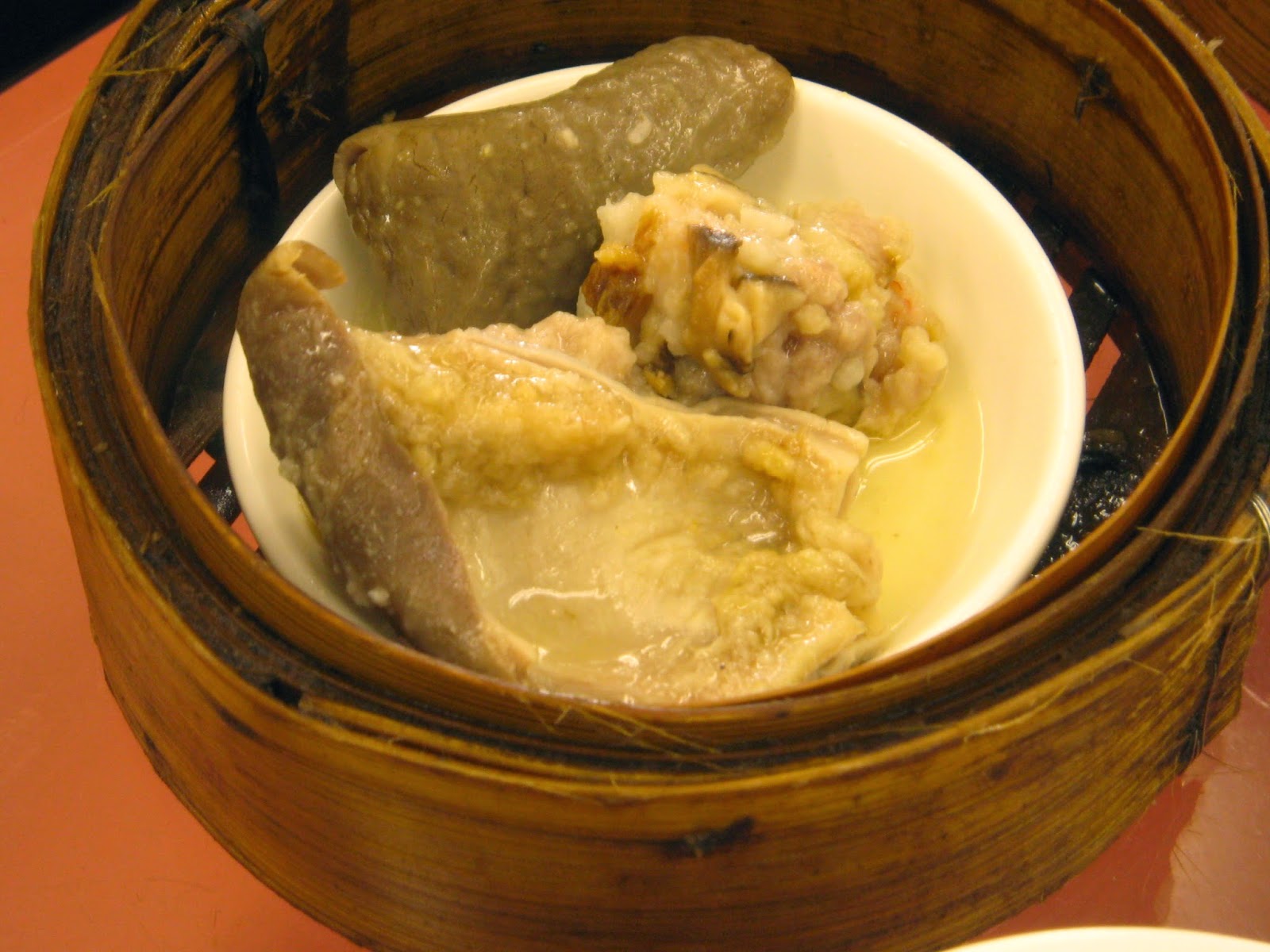 Instead of plates we had small bowls, chopsticks, and soup spoons, which all made eating dim sum easier and less fussy. 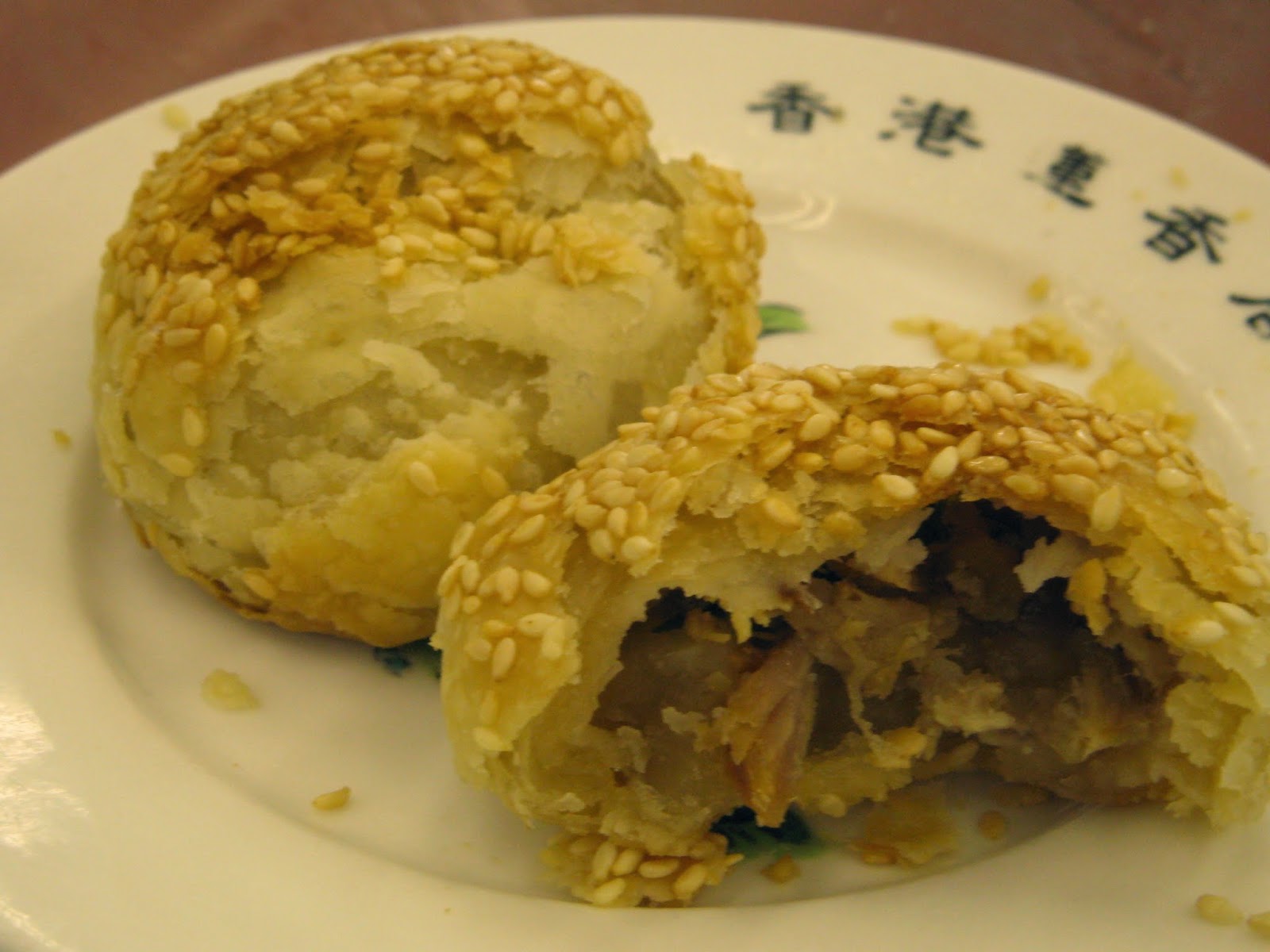 This sesame-covered pastry had an excellent flaky, flaky crumb, peppering my chin with paper-thin flakes at every bite, thin enough to let the caramel-sweet char siu filling to shine through. 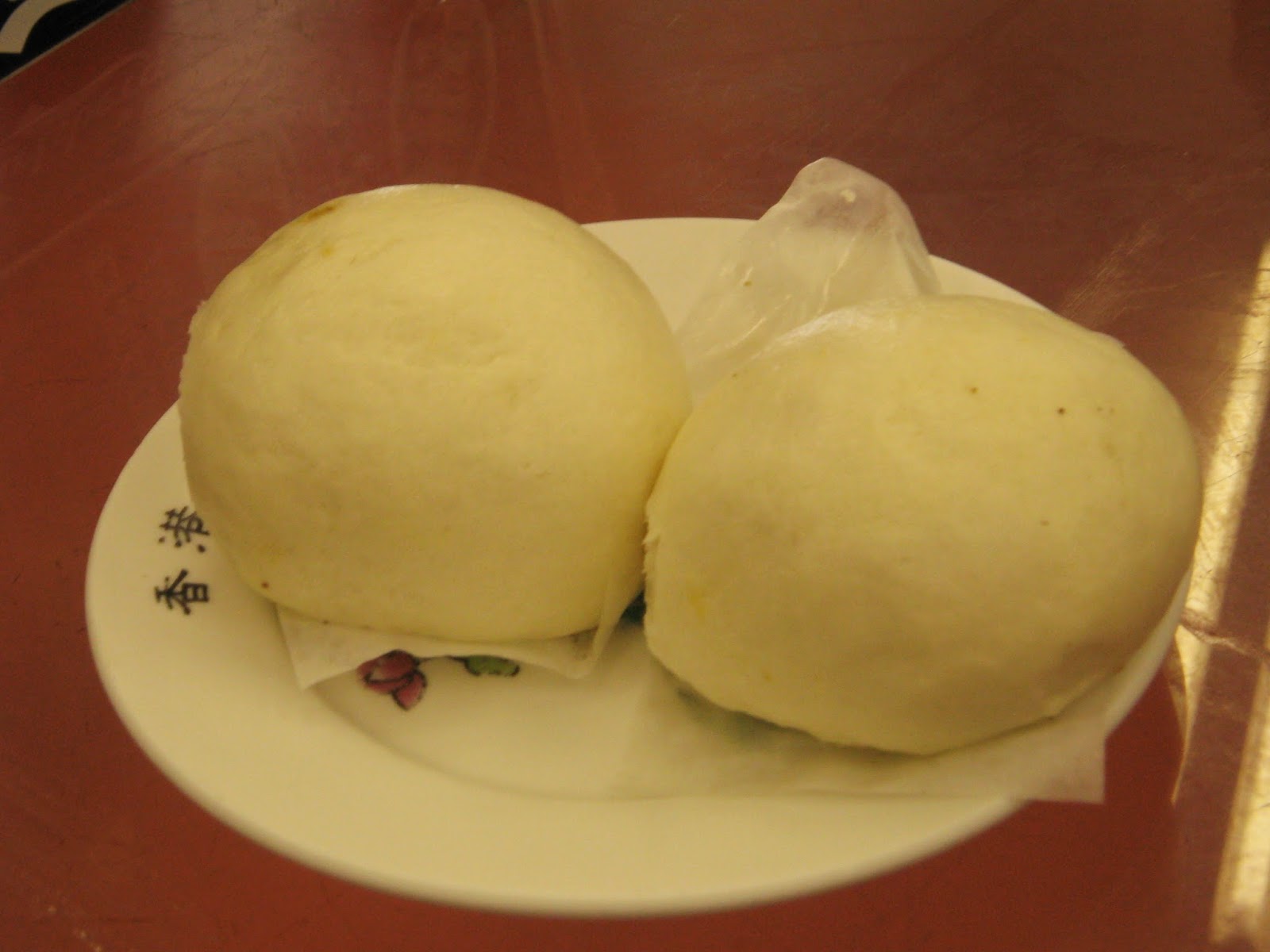 The lolos eating beside me got a plate of lotus-paste buns from a dessert cart, and pushed the plate towards me. For a photo, they gestured. When I had taken enough shots they gave me one bun, and said it was very good. 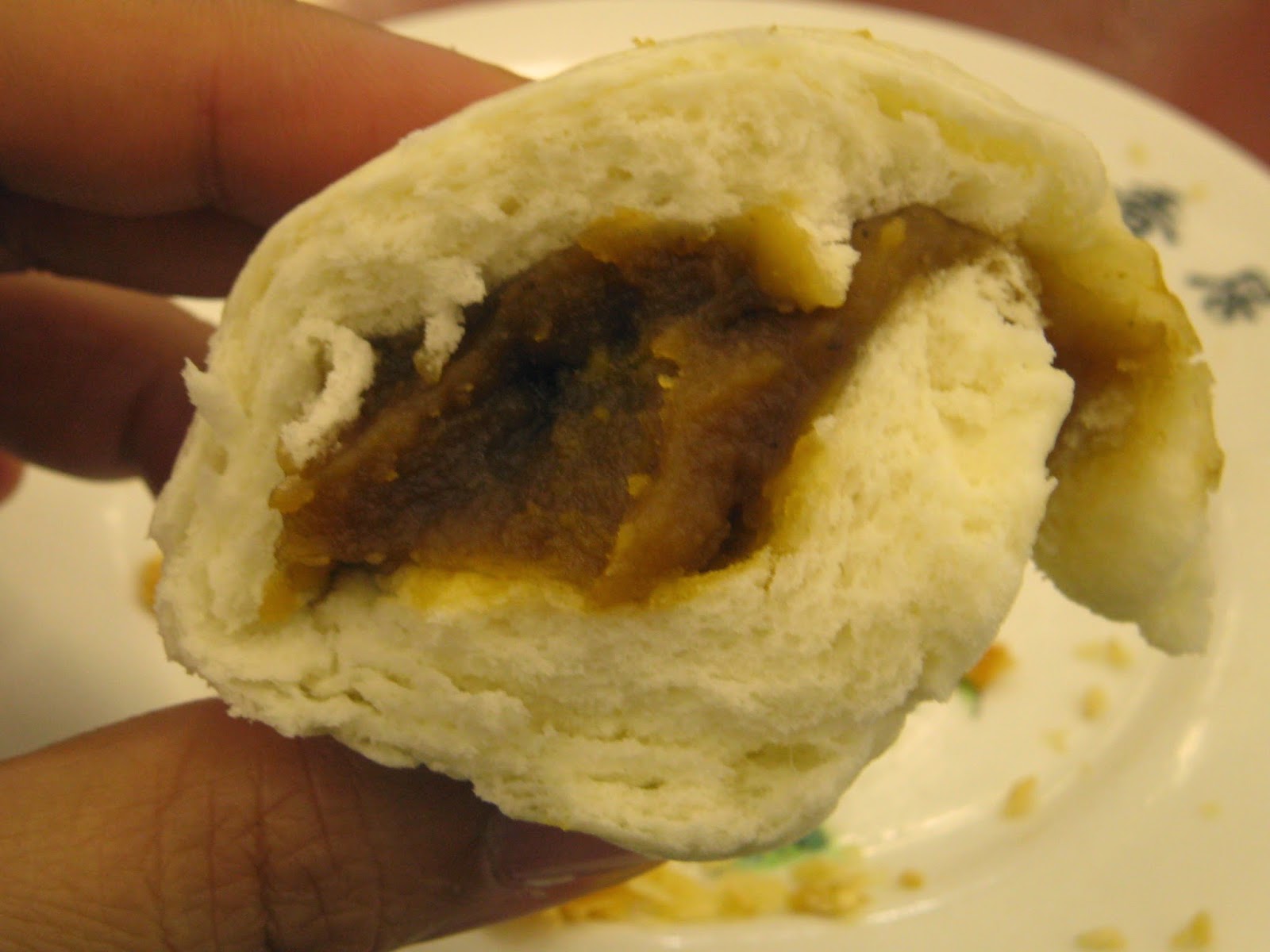 It was very good indeed. And I felt honored, as the Chinese consider lotus as a symbol of  long life, humility, honor and tranquility. My entire adventure at Lin Heung seemed blessed by the gods.

When we had slowed down a bit the lolos turned their attention to me, and asked, Filipina?

I smiled and said yes, and asked if they were from nearby. They said, in halting English, that they were from Kowloon, and that they had come to Hong Kong island to shop at the Sheung Wan dried seafood market, showing me their big bags full of loose tea leaves, abalone, dried fish and scallops. I nodded contentedly, remarking that I had gone around the stalls myself that same morning. And about which I will be relating in my next post.

Email ThisBlogThis!Share to TwitterShare to FacebookShare to Pinterest
Labels: from around the world, nainom (inumin/drinks), sira (ulam/viand)

siopao excepted, how very different dim sum is with regular rp dinner fare. and the variety!

you are such a brave, adventurous soul. and we are all the better for it. because it seems you are forever expanding the scope of your blog which goes: A documentation of the food and culture of the Philippines, with emphasis on the landscapes of Pangasinan and Cavite.

Ah yes, Lou, and I haven't even gone deeper into the cuisines of my home and host provinces. Thanks for dropping a note, I wondered for a while what happened to you :-)