The Coffee That Bites 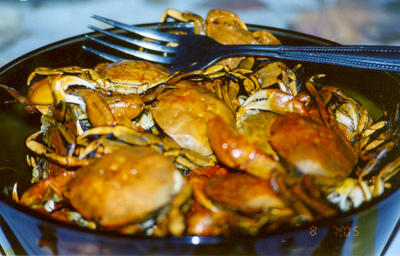 
The rainy season softens the earth, the rains reaching down beneath the ground, coaxing out new life. We see ricefields sprouting green. And we see gurgling waterways filling up with an abundance of creatures, which the rains have brought back to life from hibernation beneath the soil.

So it is during this time that adventures with a hook and a line abound, and the wet markets display the season's harvest - skinned patang (frogs) skewered on sticks; small, freshwater crabs called kape or talangka in Tagalog; the kape's landlubber relative, dakomo; pantat or hito (catfish); bisokol , kuhol (snails).

However, I'm talking about the past, because these creatures are fast becoming rare as a result of our widespread use of chemicals in our environment. People say fertilizers, pest control, palay pest sprays have almost eliminated the things which defines, identifies and differentiates what Pangasinan food, and Filipino food in general, is.

Some of these have resisted being cultured, while the others are not considered a major component of our food scene, thought of only as a delicacy, even an exotic decor, that their kind and their exsitence are taken for granted. I mourn the day when we would all be eating the same thing, cooked the same way.

The dakomo, for example, is almost non-existent. This small crab burrows in ricefields, and can be found by tell-tale holes in the soft soil. My husband tells childhood tales of him and his friends agitating the holes with a stick, then reaching a hand into the hole to grab the unlucky crab. The boys go home with baskets of live crabs, to be scolded by their mothers because crab holes look a lot like snake holes, but that risk adds more to the attraction of the adventure, and boys will be boys.

The dakomo can be distinguished from the kape by its more concave body, and darker color. When cooked, its has more flesh, but less of the kape's red, hard fat that is so good with calamansi on steaming rice, and for which it is famous. Both are cooked traditionally in soup soured with salomagi, sampalok (tamarind), which is also how the bisokol is cooked. But the tiny crabs can be had like their big brother and sister crabs, steamed with a little water then slightly toasted in the pan with some salt, and a little oil if you like them shiny and slicky red.

It is old practice never to cook and serve these crabs in the evenings, as a precaution against developing diarrhea deep into the night from ingesting crabs which were already dead prior to cooking them. So the kape or dakomo have to be caught/bought early in the morning, cooked alive for lunch, and eaten right then and there, the left-overs thrown away.

I found these kape in Dagupan City. The vendor had two batyas of them alive, with eyes popping. Kape are still available because they are freshwater-dwellers, so they have more fighting chance for survival. No dakomo, though. No bisukol and no patang, either. Now when it rains, all I hear are bull frogs calling like, yes, bulls, which is sometimes scary because they make you think a whole herd of runaway bulls is coming. These are a species not endemic to this part of the earth. They scare away the edible frogs, who produce unparalleled, unbelievably choral music, even orchestral music in tandem with the crickets, a celebration of life given by the rains, echoing of happiness for God's blessings.


*Kape is also the general Filipino term for coffee, in almost all languages in the Philippines, including Pangasinan and Tagalog. Hence, the title.

What a wonderfully sensual foodblog!
I'm from the Chesapeake region of the USA and our crabs are known for their size and taste...the Chesapeake blue crab. We cook them in bear and season them heavily with Old Bay Seasoning. They too are less plentiful and are very costly. I had one softshell crab once and didn't really care for it. It was deep-fried and in a sandwich. I love the blue crabs more than the Maine lobsters.
Your photos and writing style make your food blog very enjoyable. I'll be coming back to see more.
Bon appetite!
-MisFitToy

MisFitToy, thank you for your kind words. It is very interesting to read about local food. Will keep blue crabs in mind, for the time when I get lucky and get a chance to visit the Chesapeake region.

Ayayay! Same lament I have about Kapampangan food. When just a few years ago, our endemic frogs used to be common everyday food, nowadays they've become a rare. It's the cultured bullfrogs which are found in the marketplace and in restaurants.

Ayayay talaga! Incidentally, do you also eat camaru? What are they called in Pangasinense?

Karen, I think camaru is your very own, we don't have anything like it, as far as I know. When in season (I think near palay harvest time?), we do pass by vendors along McArthur Highway in Tarlac waving bags and bags of camaru, but we never buy since I don't know how to cook them. I'm so awed by how you manage to "fruitfully" make use of such creatures harmful to the palay.

But I never miss the camaru at Cabalen. I like them fried. ;-)

Taba ng talangka came to mind when I read this. I love the "kappi" crunchiness especially if dipped in vinegar and garlic.

Ay Kai, very easy! What they sell are already cooked adobo-style so all you have to do is dress them and fry.

You make me crave for burong talangka! Salted for a few hours then calamansi to accompany them, I'll be happy for a day!