[Intemtem/Tupig]
Streetfood was forbidden in my childhood, along with "bad" and/or "adult" things like coffee and Coke, and anything vended in bus terminals and bus stops, and aboard passenger buses. Being the obedient child that I was, I totally removed myself from the streetfood scene. My self-control received tremendous help from the fact that I was given no pocket money going to school. Since my mommy taught in the same elementary grade school I attended, I could always go to her classromm if ever I got hungry. Which I did not, having been raised in a household where merienda was not a daily feature, except during summers when mangoes were in abundance, but that is another story.

So I never got a taste of softdrinks in childhood, as well as milky ice scramble topped with leche flan, sweet spicy dilis, Chippy, Cheeze Curls, prawn crackers, kropek, Bazooka Joe, juicy fruit, tootsie rolls. I'm enumerating these specifically because these were the recess items I salivated for which my classmates so adultly bought and drank and munched on, particularly my childhood bestfriend and neighbor who had big balons (pocket money) daily.

This I carried on until adulthood, so much so that I could never bring myself to drink coffee voluntarily until now, and I reel from the impact of soda in my mouth and in my stomach. I tried a Starbucks one time, and I stared at the ceiling the whole night due to the foreignness of the caffeine in my blood. And up to now I cringe at the thought of eating fishballs and isaw, and my husband laughs at me.

But my aversion to streetfood was vindicated during my first days at work. I was brought by some officemates to the fishball joint in front of our building, and I gamely partook of the fare. I went down with LBM the next three days, and so did my fishball companions. The fishballs themselves were not the culprits, though. It's the sauce, which harbors the saliva of all those buying fishballs, dipping and re-dipping them. This has already been remedied by the requirement that hawkers have paper plates on which to pour on the sauce. If the hawker does not have any paper plates, then it is best to dip the fishballs in the vinegar, and only once.

It's actually so amazing how varied streetfood vended on portable cooking carts are. We have hot mami (noodle soup), lugaw (congee), all parts of the chicken and curdled pig's blood marinated and grilled over live coals, even day-old chicks, and unhatched ducklings, and now we have fried bopis (pig lungs) on sticks. 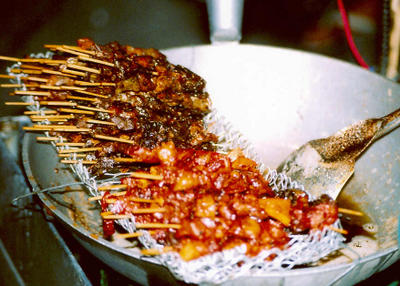 But back to my childhood. My parents made some exemptions to the streetfood we could not eat. One was the hot pan de sal in tin containers carried on bicycles very early in the morning, waking you up with its horn going toot-toot! Second was the sorbetes, denigrated to the name of "dirty ice cream," whose tinkling bells in hot afternoons always brought joy to us children. And third, balut, of which I could eat up to six pieces, but only the yolk, because I am squeamish about the duck embryo. My parents used to eat my left-overs, now my husband gladly takes over.

But the best streetfood I was allowed to eat, and which I think best represents the streetfood scene in Pangasinan, is the intemtem, known outside Pangasinan by its Ilocano name, tupig. It is made of ground rice, sugar and buco (young coconut) strips, rolled and wrapped in banana leaves, then grilled over live coals. All ingredients considered staples in the pronvincial food scene.

It is the quintessential provincial product - hand-made by old women using all local ingredients with a recipe handed down orally, untouched by machines and preservatives thus perishable, not available 24/7, comes in uneven shapes and sizes, packaging will not survive long distance transport, quality is not assured at all times, and cooked right before your very eyes.

I don't know where it originated, because we have tupig hawkers in the Ilocano parts of Pangasinan (popularly in Carmen, Rosales, the junction leading to and from Ilocos, Pangasinan and Nueva Ecija), intemtem in the inner towns of Pangasinan, and there is tupig, too, in Camiling (the border town of Tarlac). I don't know whether the incorporation of some parts of Pangasinan to La Union, or the close proximity of some towns to Ilocano-speaking provinces, is connected to its origins, but what I can surely say is that intemtem is grilled and vended in churchyards, and along streets leading to churches, in almost every town in the province.

The best intemtem used to be sold in the pilgrimage town of Manaoag. They were fat, moist, with generous slivers of young coconut. But that was in the past, they have commercialized so much so that they now resemble the tupig sold in Carmen.

And yes, what I'm saying here is, the tupig vended along bus stops are of inferior quality. They are so dry, very thin, greasy, with almost no coconut and the rice isn't ground smoothly. A good intemtem should be eaten hot off the tin grill, wafting the aroma of burnt banana leaves, cooked to the inside but still moist and sticky, not soggy, slightly sweet, with coconut strips ripping off the intemtem as you take a bite.

Intemtem vendors in my hometown of Malasiqui, as in the other towns, sell only during Sundays when everybody goes to church. I always have them as a hot, pre-breakfast treat after morning mass. The rare indulgence keeps the intemtem a favorite streetfod that is looked forward to every week. For this I would gladly eat on the streets, with my parents' wholehearted approval.

Intemtem, that's it! Thanks to you for reminding me of that name.

My Pangasinense auntie used to bring some for us when we were small. I know that they are the same as tupig but I associate the latter with those bought from the bus. Therefore, intemtem to me is far superior to tupig.

Hi karen!...know what? Tupig is one of my favorite native delicacy from the North.. I really love the taste!

Yummy tupig. My grandpa was also from Pangasinan, in San Fabian. We love to eat Pangasinense foods.

When you have time, Kai please help me with my blog. I don't know how to improve the appearance of my blog here in blogspot(kapalmuks ko ba?).

hey kai! well done! we also have tupig in nueva vizcaya, the province next to isabela. tupig is a "must" buy when we travel to and from manila. i just love it.

Hey, Where did you go? Post some more! You're a great writer and the world NEEDS to read this stuff. --- Seriously, you write like 6-7 years ahead of your time as a "foodie". Great skills. I'm sure you have great taste buds. Get back on it!

Hey I've written almost four hundred posts since this article. Just look for the labels by the side bar. And thanks for the kind words.