The HEAT is on at EDSA Shangri-la 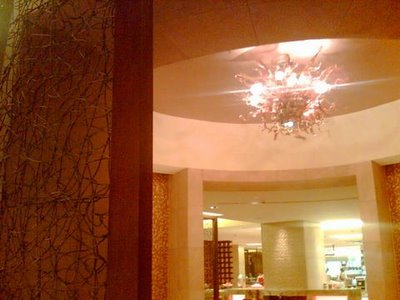 Last December 22 the EDSA Shangri-la Hotel in Ortigas Center formally launched its new coffeeshop, HEAT. At the helm of the marketing and opening festivities for the new restaurant was EDSA Shangri-la's new director of communications, Neil Rumbaoa, the guy who launches Shangri-la's thousand ships - restaurants, resort facilities and what else - with aplomb, redefining the way things are done in the industry.

The Shangri-la hotels are known for understated opulence - lavish and luxurious, yet not brazenly so, and certainly not garish. HEAT is so Shangri-la, but goes beyond lavishness, almost to the point of sumptous excessiveness. And more.

What else can you say about a coffeeshop with eleven stations all in all? There were fives, and sixes, and just recently there was a seven. But eleven?

I for one was floored, overwhelmed beyond words. Speechless. And immobilized. My mind could not keep up with all that I could see - food that stretched on beyond sight. For a moment there I thought I was just going to give up and leave without tasting a single morsel, while my companions rushed on to attack.

But no, I just needed several minutes to process the seemingly insurmountable task. Took a single step. And lived to tell the tale.

Heat stands for Healthy Eating, Amazing Tastes, as well as extending to its cooking properties and ability for creation, as when gold is extracted from ore, or when the universe came into being with heat or fission. Going on, heat is also passion, for food, and other exciting things in life.

One surely needs to be passionate about food when eating at HEAT. 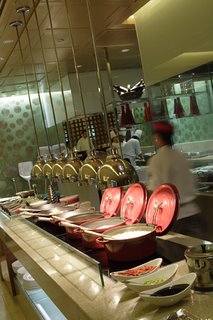 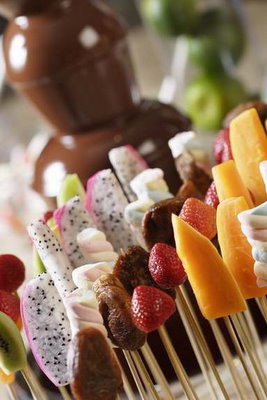 On a U-bar are the Japanese station and the appetizer and cold salads station, while another bar contains the desserts - fresh fruits, a creperie, dark chocolate and white chocolate fountains with skewered fresh fruits and all other sweet things, an ice cream scooping station with all the toppings you could wish for, a halo-halo bar with gargantuan glasses, and more sweet confections in glasses as well as tarts, cakes and other pastries. 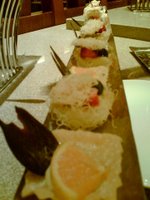 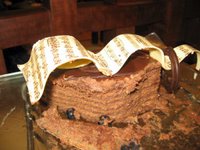 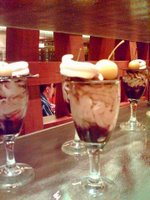 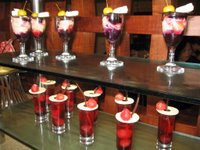 My college orgmates turned lifelong friends and I caught the last leg of the restaurant's dry-run on a blazing night. It was decadent. We requested a four-cheese pizza, and were told there is a five-cheese pizza. Yet it was surprisingly homey, the tastes evoking home-cooked goodness and comfort. The pizza was crunchy and thin, with nary a drop of oil, and it recalled for us our countryside tramping days in Italy. Same with the fabulous risotto, which could put any famous local Italian restaurant to shame.

And oh boy, the sinigang na baboy. It was the unanimous favorite of the night, even for the seven-year-old lad eating with us. With just the right sourness that spoke of painstaking work with real tamarind and no shortcuts. The adobo was very Filipino, as well. What other hotel coffeeshop could be more Pinoy (if there is a permanent Filipino station at all) than this?

As it was a cold night, I started with the noodle station, wanting some hot soup. Just in that station there were numerous choices, with three kinds of soup (including laksa), noodle choices, fresh seafood and meats, greens, and an endless array of condiments and garnishing to suit any taste.

The beef in red curry and garlic chicken in plum sauce were both excellent, as was the salmon and porcini salad. And the smoked salmon with capers that I love. I couldn't resist the bright offers of ice cream from the scooperie. Good thing I gave in, because the vanilla and strawberry flavors are to die for. More gelato than ice cream. And the cheesecake, well, both Makati Shangri-la and EDSA Shangri-la are now my two favorite cheesecake outlets. They make the same crumbly yet moist and only subtly sweet cheesecake that is light as air but richly rewarding. 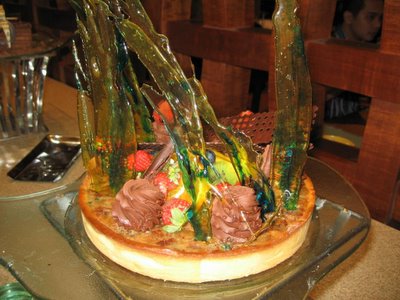 As for the rest of the food, I could only eat so much. We got into a discussion about how such debauchery and self-indulgence should be outlawed. But isn't eating, along with loving, the one thing that should be done with reckless abandon, or it isn't such at all? I think such an overflow of choices is meant to satisfy the most number of people who have widely varying tastes and preferences. Who do not necessarily eat to excessiveness, but would be grateful for finding a home away from home, albeit a very luxurious one.

Which is what Shangri-la is known for. And what would keep the hotel chain at the top of its class. 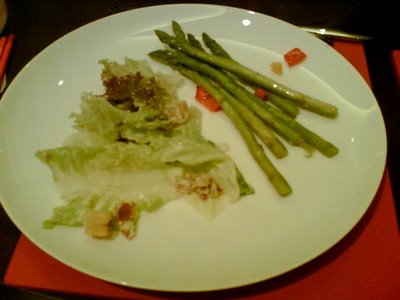 Minimalism: the anti-thesis to Heat.
[Caesar Salad and Steamed Asparagus].

Luxury, but with a friendly price. Breakfast is for Php880++, lunch Php980++, and dinner Php1,080++. Same with other five-star hotel coffeeshops, but with more value for money. It's certainly worth going back to again and again. If only to be able to taste everything.

Read about my second visit to HEAT here.

Yo Karen! Excellent writing! You really know how to put flavor in WORDS! I could almost feel again the textures of the dishes we had last night as I was reading your article. Yummy!;-)

and how much does this all cost? =O

Happy Holidays to you and family...

Hi, I found your blog through Google searching for HEAT Restaurant. My family tried it out for New Year's Eve dinner. a lot of people, typical, and the food? more than amazing. i agree with everything you said about the food. couldn't write about the experience as well as you did, though.

Happy new year, everyone! Sorry, I was offline for the holidays. Just updated to include the prices.

Hello. I, my wife & our kid are planning to pig out in Heat in the next couple of weeks after we enjoyed Circles last month. And your blog entry here has been informative. Nice post! Can I include your site in my blogroll? Thanks.