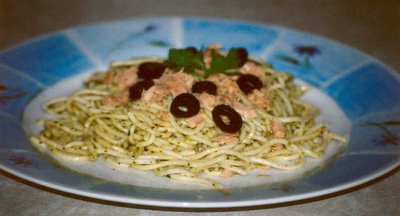 I've served this during two parties for different sets of people, the first set included my long-time friends with whom I have been to Italy numerous times, partaking of the local cuisines throughout the length and breadth of the country. I had to mention this because spaghetti al tonno is described as "the classic Italian combination of pasta and tuna," in this dish enhanced by a parsley sauce. It debuted with lukewarm reception by the said friends.

I certainly do not recall us eating this kind of pasta in situ in Italy, whether in the countryside or in cosmopolitan Milano or Roma. What I particularly remember is a pasta with a sauce of olive oil and anchovies - more for the fact that it tasted like spaghetti drenched in my indispensable Pangasinan bagoong (salted, fermented fish sauce) than for its spectacular taste.

But I liked spaghetti al tonno, never mind that it was not appreciated by my core of foodie friends. So I threw caution to the winds and served it again at another party. As it was, it was more like throwing caution to an ipo-ipo, a twister, because this very party was my first attempt at catering.

Of course, the truth is, I actually volunteered myself. It was supposed to be our office department's monthly get-together for birthday celebrants. Previously, my officemates and I were getting wary of the rising costs of catered food. Since it has become the tradition that the honorees will not contribute to the food costs, their share to be distributed to the rest, we have been taking notice of the considerable dents these regular parties are causing to our bankbooks. Especially since we get exempted from the contributions only once a year. So, bold that I am, I took it upon myself to provide the food and table settings sans mark-up, just charging actual costs.

To be honest, I'm not really that brave and it actually took me a year just to gather enough courage to say, very softly and very matter-of-factly, that I'll cook for this month's party. From then on, though, things got out of hand. When the head saw my menu, she decided it was worthy enough for our department Christmas party, albeit an early one, as well. For weeks I was stressed out planning, surveying available ingredients, comparing prices, ditching dishes and frantically searching the net for new inspiration. All these was aggravated by the abovementioned friends rolling their eyes and saying, how could I volunteer and bring so much stress upon myself?

But life is kind and full of surprises. And generous sometimes. Because everybody, as in everybody, in the office liked it. Actually liked it. And have been begging for the recipe.

So now I see my officemates with different, enlightened eyes, and have resolved to be kind to them for the whole of 2006. And because it's rating time, with Christmas bonuses dependent on the rating scores, I have also resolved to rate them perfectly.

Of course, I'm only joking. I'm generally kind and friendly, though more shy than anything else, for the most part of the year.

Anyway, I have been analyzing things, and maybe the difference in the reception of this pasta had something to do with presentation and menu planning. The first party was more of a potluck held at my house, and there was no consideration whatsoever about how the food complemented one another. There was another pasta dish, besides. On the second party I had complete control of everything, from conception to menu planning and down to actual cooking. The pasta was more or less the star of the buffet table. I get some bravado every once in a while.

This dish calls for processing together olive oil, fresh flat-leaved parsley, crème fraîche, tuna and anchovies. I substituted half the parsley with fresh basil and then some, and since I cannot find crème fraîche I used cream cheese instead. I also used flaked tuyo tonsoy (the local dried salted fish) that have been fried previously in lieu of anchovies to give the pasta a local touch. This is tossed on spaghetti, with black olives or capers as garnishing.

In the first party I processed everything together, but the next time around I left out the tuna, to top the pasta as well as served in a small bowl at the side for those who love the fish. A good alternative to tuna is sardines in oil (Spanish/Portuguese style).

This is usually served with warm crusty bread, but I served it with toasted, store-bought pita. I filled the pita with tomato sauce mixed with Italian herbs and topped with crumbled kesong puti, our local mozzarella made from carabao's milk, to approximate a pizza. I used pita because it was convenient - I could toast the pizzas at home then carry them stacked to the office without any mess - and because it provided an excellent thin crust that is very close to a real Italian pizza, without my having to bake them.

My officemates sliced the pita into halves, but everybody had seconds anyway, so we ran out of it 10 minutes into the party.

Email ThisBlogThis!Share to TwitterShare to FacebookShare to Pinterest
Labels: from around the world, pancit (noodles), poncia (handaan/party)

never had alla thun in italy...I go almost every year

spagetti ala thun is very popular in south of france

what I do with mine is.. i add red sauce, green & red pepper,lots of fresh tomato, parsely and simmer it for so long to get the flavour.

i'll definitely try this one out! love any pasta dish around..btw, i've already tried your aligue pasta recipe..good! thanks kai!

Looks yummy Kai! This is similar to my favorite pasta dish in Figaro (I know, weird, pasta in a coffee shop, go figure) except it has no cream. I'm sure yours was delicious! Congratulations on the success of your first food "gig" :)