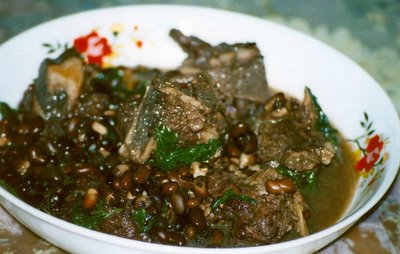 In my family, only two kinds of beans were served as a main dish during a meal - munggo, or mung beans, and black beans. Of course this excludes the white beans used for pork and beans, by which I mean the canned version, which is not really popular. All other beans are sweetened and eaten as snacks - as filling for buchi, and commonly as a component of the quintessential Filipino summer snack, halo-halo.
Both munggo and black beans are cooked the same way, boiled with either dried or smoked fish or meat (using bagoong or salted, fermented fish for the former and just salt or patis, fish sauce, for the latter, as a flavor enhancer), for a chunky, protein-rich stew. The addition of young leaves of ampalaya (bitter gourd), marunggay (malunggay, moringa oleifera), spinach, baeg, and other leafy vegetables of choice during the last 2-3 minutes of cooking is a must, and adds a different flavor dimension to the stew, usually on the bitter side.
Of the two, munggo is served more often, and sometimes as a dessert, too, probably because it is more manageable to chew and digest. The stew is usually sauteed with garlic, onions and tomatoes.

As for the black beans, the preferred sahog is pork or beef, with bony beef the prime choice, simmered in a woodfire for hours to bring out the full flavor. The black beans turn everything - the soup, the meat, the leaves - black, like a dinuguan, or pork blood stew. It has a smokey taste and aroma, and the beef punctuates the softened beans like a comma when chewing, with the leaves like little exclamation points.
I like black beans, and I try to serve it as often as I can, now that I manage my own household. Filipinos don't really value beans, or we don't as much as I would have liked, because legumes are considered the poor man's protein. Which is ironic, since we could get quality protein from beans without the cholesterol and saturated fats that come with the protein of animal meats.
In fact, research proves that black beans, also called turtle beans, is a superstar in its own right. One cup of black beans contains a whopping 172% daily value of the trace mineral molybdenum, which is needed by the body to detoxify sulfites. Sulfites are a form of preservative added to deli foods, and can cause rapid heartbeat, headaches and disorientation.
Black beans are also rich in folate, soluble fiber, protein, and magnesium, all working towards the prevention of diabetes, cancer and coronary heart disease. What's more, black beans contain high levels of the trace mineral manganese and the antioxidant compounds anthocyanins, which have been found to be 10 times more than that found in oranges, and in the same level as the top antioxidant fruits grapes and cranberries.
Antioxidants protect the body from free radical damage, helping in the prevention of the onset of various diseases and ageing. A study in 2003 also revealed that the darker the seed coat of the beans, the higher its antioxidant activity level. Nothing gets darker than black beans.

An entry to ARF/5-A-Day Tuesdays, conceived by Sweetnicks. This week, the #6 edition, is hosted by Stephanie at Dispensing Happiness.

Thanks for the information re: black beans. I also love black beans in my fish and pork dishes.

i love black beans in a simple stew with manggiwgiw a sali-baboy, but did not realize how good it is for the health. i've seen that it is also popular in mexican food.