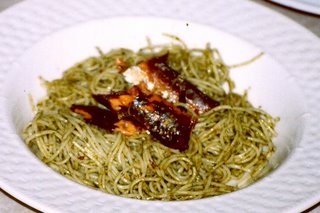 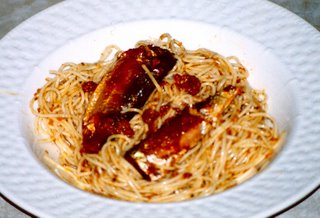 One of the great benefits of working for an agency with a nationwide branch network is access to the cornucopia of regional delicacies without even moving a foot out of my office workstation. Inter-branch employee swaps happen all the time, for training, seminar-workshops, audits, as well as case presentations and the like.
It is a well-acknowledged fact that my co-workers in the countryside branches are the most hospitable lot. You are treated like a celebrity when you visit the branch - toured around, taken to the best eating places and loaded with food and souvenirs to bring back home. But most importantly, you are never forgotten when it is their turn to come visit you.
I have had the luck of meeting colleagues from across the archipelago. And so I have eaten my way from Laoag to Jolo, forgive the exaggeration, by way of well-appreciated pasalubong from branch colleagues, and sometimes even from workmates returning from provincial stints. 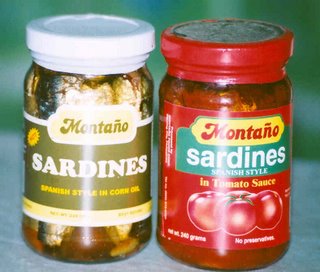 And so before I ever set foot in Dipolog City in northwestern Mindanao, I have been enjoying for years the city's pride, Spanish style sardines made and sold under the Montaño brand.
The sardines, beheaded and cooked whole in corn oil with salt, whole peppercorns, some pickles, carrots and chilies, came in clear botttles with a green label, and were hot. Hot enough to make you forget the oiliness of the fare, but tame enough to let the fresh sweetness of the sardines shine through. I say they're sweet - no fishy hint or malansa taste, allowing me to conclude that they have been handled with the greatest care - cleaned thoroughly and processed straight from the sea, and flavored just right.
All other brands pale in comparison, and are like bilasang isda, when set beside Montaño's sardines. I stopped buying bottled and canned sardines from supermarkets, and just waited for windfall, which happened about once a year, from Dipolog. When I did get to visit the city I hoarded dozens of bottles, and that year I felt so rich to have the privilege of indulging in Montaño's bottled sardines.
Several years ago, though I have maintained good relations with co-employees in Mindanao, I have stopped relying on generosity when I found out, with a very big sigh of relief, that Rustan's supermarkets have started carrying Montaño sardines. The supply was sporadic at first, but I didn't mind, as long as I had my sardine fix at least once a year I managed to get on well with life.
And then every trip to the grocery became an excitement of sorts, because, first, there appeared sardines in tomato sauce. This variant is not hot, but still great, with tomatoes in oil, not the usual thick sarsa in canned sardines. And then there appeared Spanish style sardines in olive oil. I'm tickled pink to be anticipating other variants. And my corporate strategy training is silently applauding these developments, because one superb means for a company to stay afloat and have long-term viability is diversification, and Montaño is doing just that. I'm assured of enjoying high quality gourmet sardines for a long time yet.
The last two variants gave me the idea to top the olive oil sardines on pasta with pesto sauce, in a way replicating that great dish I once had (forgot the name) at Italian chain Cibo. The tomato sardines goes well with pasta mixed with its tomato sauce. I found this bottle of red pesto (pesto with sun-dried tomatoes) made by Philippo Berio, and I tried it with the tomato sardines, but I was disappointed with the muted pesto taste. The tomato sauce of the sardines was way better.
For this pasta dish it would be nice to use angel hair or capellini pasta. For a great way to cook your own fish Spanish style, may I refer you to fellow Filipino blogger Ting, who has perfected her own Spanish style recipe through the years.
Posted by Kai at 5:37 PM

wow! pasta and sardines? pesto? yumm! parang i suddenly had a craving for this..lunch time!:)
i remember my sis who used to work in rebisco..dami rin namin rebisco products nun! hahaha..

Thanks for sharing - what a great idea!

am going to enjoy my favourite pasta.... pasta vongole with angel hair of course

and thing is i will not so far from genoa so i will have an overdose of fresh pesto,

o selos ka? hehe
its work.... but when i ever come to phils i might as well tag along with you...I JUST INVITED MYSELF lol

Ces, Ging, I never would have thought about it, too, if I haven't been to that restaurant Cibo. It works, really, and healthier, since it brings down the saturated fat content. Meron pa nga raw sardines pizza sa Italy, di ba Sha?

Tin, you made me crave tuloy for sardines omelette, or sardines with misua, yum!

Sha, selos ako to the max! I will be eagerly waiting for your posts about your trips at Wanderlust and Impromptu! Bah, when I ever get the chance to go back to Europe (dream on, hehe!), I will invite myself to tag along with you, too! Mas sosyal yang mga lakad mo, hehe.

my dear kalad, my latest montano discovery when i was assigned in zamboanga is montano tuyo. beats all the expensive fancy bottled tuyo here in manila. however, heard its always out of stock in dipolog and i keep badgering sausage to find me three precious bottles at sm supermarket. it is soooo delicious, i guarantee you.

Amici serves pasta with sardines and fresh tomato sauce, and its called Penne Mafiosi. It would be a crime not to try it!

Thanks, Kalad, for the tip. Will be on the lookout for Montano tuyo, too, and will try to procure a few bottles for you!

Hi, C. Yes, indeed, it would be a crime. So that's the Mafiosi pasta. Great treat for a Friday!

I am really fastidious in choosing bottled Spanish style sardines at the supermarkets. To be honest, i find Montano's to be the best brand of them all. The fish were fresh from the catch as they were processed. You can savor the aroma as you smell from the bottle. The fish are firm and intact with minimal traces of fragments at the bottom to suggest of its freshness when it was made.
On Pasta, try it with fresh tomatoes cooked with garlic, rosemary, oregano and basil and the sardines. Tossed it with al dente steaming pasta. So delicious and appetizing!
On Pizza toppings, spicy hot sardines is delicious with marinara sauce, capers, onions, oregano with mozarella, magnolia quick melt cheese and parmesan. Very good combination!

Thanks for the recipe and info, Alfonso.

I've tried Zaragosa - it's too fishy (malansa) for me. But I can understand the situation - it's aggressive marketing at play. It's cheaper than Montano's, too.

I was looking in the internet re: bottled sardines and found your blog site. Just like you, I & my 12-year old son (his name is Aldrine) are very fond of eating bottled sardines in oil. As a matter of fact, we’re even thinking of making it ourselves for our own consumption and eventually for business. I have yet to taste Montano, but I’ll try to buy a bottle and have it with steaming rice tonight with my son. Can’t wait actually, bigla akong ginutom hehehe.

Anyway, it’s been nice reading your blogs. Hope we can keep in touch and share whatever catches our fancy.

Thanks and best regards

You were right! Of all the bottled Spanish sardines found in the market today, Montaño Sardines will always be the best? Why? Because they were the very first to do it not only in Dipolog but in the whole of the Philippines. It is the ORIGINAL Spanish sardines in the country. I was born in Dipolog City and long before the Zaragozas, Radons, Tito Mikes and Mendozas came, Montaño Sardines was already reigning supreme. It was a concoction by Doña Concepcion Macias vda de Montaño. To know more about the history of the bottled sardines, please watch this video --> http://www.youtube.com/watch?v=rLD4KFRYHQ8

So, to everyone out there who plans on buying bottled Spanish sardines, always choose this brand but if not, at least read the label and if it says "Made in Dipolog City," that should be good cause it came from the city where the spanish sardines industry started. Gloria Macapagal-Arroyo, as lame as she is (hehe), even called Dipolog City as the "Spanish Sardines Capital of the Philippines" and awarded the industry as the "Best SME (Small and Medium Enterprise)in the Philippines. It's exported from different parts of the world already and I could even buy it here in Canada.

This is kinda long already but well, I just wanna share. :)

Thanks very much for sharing. I just hope the company's operations would not be affected by the demise of the family head, may he rest in peace.

Best Sardines ever! I usually this sardines as a toppings of my 4 cheese pizza and it is so delicious. Everytime i visit dipolog I usually bought 24 bottles and carry it back here in the US.