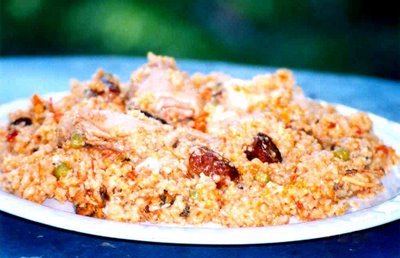 This is a very Pinoy (slang for Filipino) paella because, for one, it is not cooked in a paellera like the original Spanish paella - I cook it in a kaldero, which is where ordinary kanin or steamed rice is cooked. And it has a distinct tomato taste and color from the fresh summer tomatoes I stewed before mixing in, which is also why I identify it with summer.
No saffron here - I would have used kasubha as a substitute but I was content with the orangey color imparted to the dish by the tomatoes. As for the rest of the ingredients, I think they, more or less, approximate the original dish.
But I don't think approximation really matters here. There was once this TV feature which tried to document all the existing paellas around the world - mostly in countries with histories of colonization or trading relationship with Spain and/or Portugal.
Each country's paella has evolved into very distinct dishes, assimilating the characteristics of the host country's respective food cultures. The ingredients were, in most part, where the various kinds of paella differed, as well as the flavors used.
In Spain itself, there are different versions, depending on the available or common resource in every region. So there are rabbit paellas, snail paellas. In Cuba their paella is made distinct by the flavor of their chorizo or sausage.
In the Philippines I've eaten paellas cooked as close as possible to their Spanish origins, in fiestas and big gatherings. Of course, with the amount of time and resource involved in cooking paella, it is reserved for "special" occasions.
However, in not so "grand" parties, I've had paellas that have a distinguishing Pinoy characteristic. And that is the taste of tomatoes, enriching the rice and meats. We Filipinos are so enamored by tomato sauce, as evidenced by our affinity for spaghetti (always with tomato sauce and nothing else, "bolognese"-style) and our assimilation of tomato-based Spanish stews, such as menudo, afritada (gallego), callos, mechado, etc., which are now common features in our daily meals.
And so that's how I like my paella. I don't use tomato sauce often, though, but instead reserve my tomato-cooking days to tomato season, when I can stew kilos of them to make a chunky tomato sauce. Of course this is more expensive, with Php30 worth of tomatoes yielding just about two cups of sauce, than buying a commercially processed one, at about double the amount for the same price.
But nothing beats the taste of tomato sauce stewed from fresh tomatoes. It speaks of warm sunshine, light and bright, while I find the commercial one to be heavy. Fresh tomato sauce also has a natural sweetness that can never be found in commercial tomato sauces, even if sugar has been added to balance the sourness.
And I have two young kids in the house, so I always have to be careful about what I feed them. Using fresh ingredients as much as possible and making things from scratch are one of the ways I ensure that they grow up to be healthy children.
So here's my summer paella, Pinoy style, made from scratch.
2 kgs fresh tomatoes, chopped and deseeded
1 onion, sliced
a clove of garlic, crushed
1 kg mussels, trimmed
2 pieces chorizo de bilbao, cut into pieces
1/2 kg chicken parts
1/4 kg chopped pork
1/4 kg squid, skinned and cleaned
3 litse rice, washed
2 litse glutinous rice, washed
a cup of cooked green peas
sliced bell peppers
Notes:
Posted by Kai at 6:06 PM

Hi Kai! Have been 'exiled' from blogging for a while but its lovely to visit your blog and find a pinoy paella recipe! Ive always wanted to make paella but was afraid cause - 1) I had no paellera; 2) I cant afford saffron; 3)i was intimidated. The pinoy cookbooks I have (usually from those with 'Spanish culinary lineage' dont make the prospect seem any easier too. Anyway, your recipe seems doable and Im going to try this recipe over the weekend....

To get skins off tomatoes easily you can toss them in boiling water for about 20 to 30 seconds and then pull them out. After that, the skin should come off quite easily.

Thanks for that tip, Timothy, I've been using that procedure ever since and it's been a great help!