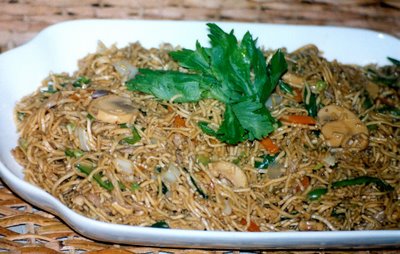 I have had the good fortune of developing a dear friendship with somebody starting on my freshman year in college. Her support meant so much to me when I ventured to join a university civic organization. She helped me survive, and she was one of the reasons I stayed on to many profitable and character-building years.
It was just my luck that she came from Lucban in Quezon. And so I was able to experience the Pahiyas festival from a guest's perspective and not just as a passersby enjoying the sights, when I was invited to her home to personally witness the festivities.
Her mother's hardinera (a terrine of pork and vegetables), that Southern Tagalog specialty, was so scrumptious and for me unparalleled. I still have to come up with something remotely similar to it, so what I have here today, in celebration of the Feast of San Isidro and the bountiful agricultural harvest, and in honor of my friendship with D., is a recreation of a famous Lucban dish I first tasted in the streets of the town as we strolled around admiring the breath-taking designs made of kiping (rice wafers in the shape of kabal leaves). 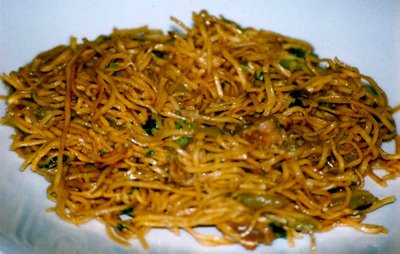 Pancit hab-hab is made from Lucban miki sauteéd with pork strips, native pechay, juliennes of sayote fruit and a little soy sauce. It is traditionally served on a small piece of banana leaf, requiring no utensils since it is eaten by bringing the container of noodles up to your mouth. Thus the term hab-hab.

Buddy's, a restaurant specializing in Quezon delicacies, has brought pancit hab-hab, among other things, to Metro Manila. Its noodle version is as authentically close as the one I ate in Lucban, including the spiced vinegar that is used to season the noodles instead of the usual calamansi.

But of course, it caters to Makati City patrons, and so it is a bit more affluent in terms of the ingredients than the one sold in the streets of its hometown. 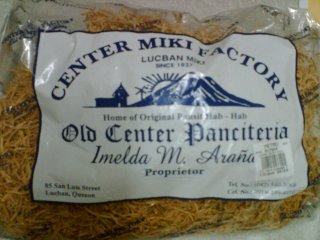 I have found out, though, that the key to having genuine pancit hab-hab is using the right noodles. In this case, it is the Lucban miki, which Center Miki Factory has been churning out since 1937. It is available in fresh and dried versions, and it is a very dense and flavorful egg noodle.

I discovered this on my last visit with my friend, who has since relocated to Lucena and is now a newly-minted lawyer. While waiting for my bus at the central terminal, I went around the stalls selling Quezon products. I espied this noodle pack, and did not need another second to consider in buying it. It was one of the most prized souvenirs I ever took home.

I generally dislike pancit canton because it becomes so greasy when sauteéed I get headaches from eating it. It also goes so wimpily limp and bland when overcooked or you mix in too much water.

Lucban miki is an exception. It holds its shape and structure after cooking, and is so tasty it needs minimal flavoring. That's why pancit hab-hab is simply cooked - the added ingredients just serve to enhance the noodles' flavor.

I have since located a stall at Tiendesitas selling Lucban miki (dried), as well as bought it (fresh and dried) once from the Gaisano supermarket at the Pacific Mall in Legaspi City on a weekend jaunt there. I still have to discover other vendors, so when I don't have access to these two I try substituting it with the Bicol pancit bato, which somehow comes a bit close.

I may come across as a pancit hab-hab fanatic. Well, I may be - I love all kinds of pancit. But I try to source out Lucban miki as often as I could because I have discovered another way of cooking it.

Now, with Lucban miki, I am able to approximate these dishes. The Chinese flavor gives the Lucban miki a whole new dimension in taste and depth of flavor, as well as creating an entirely new eating experience.

I sauté it with pieces of fish fillet, chicken meat, squidballs, bell peppers, celery, carrots, and button mushrooms, adding ground pepper and oyster sauce when it is almost cooked. It is so good it will have you believe it was a Chinese noodle instead of being a true-blue Tagalog. Pork and beef slices also lend well to it.

Besides hardinera and pancit hab-hab there are other Quezon delicacies worth mentioning, such as the special tikoy and Dealo's apas. I have yet to find them in Metro Manila, so for the meantime I'll savor Lucban miki whenever I can find it.

Oh my, u made me feel a huge craving for pancit hab-hab. Its a childhood comfort food that my mom used to buy for me or my other siblings, whoever happened to be so lucky to accompany her to Lucena via Lucban to visit my eldest sister. Those were the days when Sta. Cruz, Laguna and Lucena was connected by Supreme Bus Liner. Peddlers selling pancit hab-hab among other Quezon delicacies would approach the bus on a brief stop-over. Its a treat that I first heard from my younger siblings who were raving about it.

Oh, thanks, Yo, I never knew it was peddled on bus stops. Bus stop food have become comfort food for me, too. I wish I could go travelling down south soon, for the pancit and the tikoy.

I hope you could join us for Lasang Pinoy 10! The announcement is in my sidebar.

i had the good fortune of eating at the old center panciteria, two years ago, with the old lucban church as backdrop and merienda at dusk. We are on our way back to Manila from Daet, and i literally dragged my cousins to try their the original pancit hab hab. Of course, not to forget eker and eli for their longganisa and also the dried biya, lightly salted, thin and crispy and great for champorado. My nanay's favorite!

Kalad, lucky you! Eker and Eli? Never heard of these, you must take me there sometime! As for the biya, we have our own in Pangasinan and I love it. Let's see how it compares to a Southern Tagalog one. ;-)

Makes me feel hungry!!! im a lucbanin of course i always taste it!!! its so yummy, for those who have not eatten yet that pancit hab-hab you beter taste it now!!!

i love buddies pancit lucban.. its a meal on its own

Hi! I love Pansit Habhab! Do you know the Contact Number of Central Miki Factory? Do you know where the vinegar is bought? THANKS!!!!

still...
Tayabas Miki Factory is d original creator of Dried Pancit hab-hab and d rest only follows...:)
Try chek'n out thier new releases products such as kalabasa, ampalaya,malunggay flavored Dried Miki...
most probably d rest will insist to follow and again saying they are d original F..k them...
btw DRAGON is the brand name...
chek it out...

Where can I find the Dragon brand? A friend once gave me a pack of malunggay noodles, though I can't remember if it was made by the Tayabas Miki Factory.

according to my reliable source the DRAGON brand noodles can easily b purchased any where in d quezon province especially on pasalubong's stores, and in tayabas public market..
and basically if u had d chance to go to quezon again, simply visit tayabas city 8s a great nd peaceful town...
ayt

Ok, I will keep that in mind, thanks!