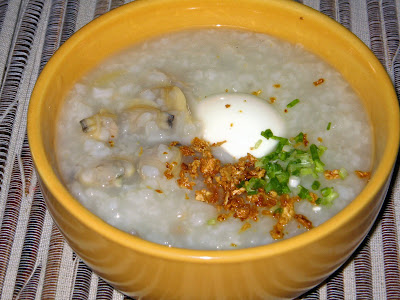 Aren't we Filipinos all glad for the rains that has been pouring down these last few days? I still hope, and it will do us all good to continue praying, that the downpours don't stop, especially since they've been announcing on television that even the three typhoons expected to hit the country this month won't do much in raising our dams' waters from their present critical levels.

Besides giving relief to the already parched and cracked ricefields in five provinces in Northern and Central Luzon - the country's palay central - the rains also offer a break from the scorching heat of the country's unbelievably extended summer. Now all I would like to do is curl up in bed with a soft blanket, cuddling my two big babies, after a bowlfull of steaming rice porridge. If only offices were suspended.

Arroz caldo, the handed down Spanish term meaning hot rice, or rice porridge, or congee by the Chinese, is the ultimate comfort food for the rainy season. It is rice and viand and soup all in one, good any time of the day, heavy enough to last you through a nap til the next meal, yet light enough that it does not build up extra bulges while you laze away doing nothing.

I have fond memories eating arroz caldo during candlelit dinners in my childhood - because there were brown-outs come typhoon time - while the windows rattled and probably our neighbors's roofs flew away with the howling winds. It was memorable, not because of the destruction wrought by the innumerable bagyos, but because we were comforted nonetheless, with our family together, sharing a hot meal, beads of perspiration breaking out of our foreheads, with me and my siblings fighting over the drumstick in the arroz caldo.

The traditional arroz caldo is rice cooked with chicken, preferably native or free-range raised in your own backyard (or in your lola's backyard), for more flavor (and less hormones and chemicals, although when I was a child we were not concerned about those things). There may be fried crushed garlic, and patis (salted fish sauce), or slices of spring onion leaves, or maybe a squeeze of calamansi, or a dash of finely ground pepper, perhaps a boiled egg or even a century egg if you're feeling indulgent. All to add nuances to the porridge and round up the flavors, one at a time or all together in one swoop.

Here, with the various condiments on the table added by the diner to the arroz caldo while eating, as determined by his individual tastes and preferences, it is more similar to the Chinese congee, which is just the basic rice soup base. That is, cook rice with more water than needed - about double - so it turns out soupy.

Chinese congee, though, is just like the Filipino lugaw - soupy rice boiled with slices of ginger - given to the sick. Add to it meats, and it becomes a feast for the whole family - whether on convalescence or just imagining maladies - during stormy weather. Chicken turns the lugaw into arroz caldo, goto (tripe) transforms it into goto lugaw (a must after a night of imbibing alcohol), lamang-loob (offal) make it lugaw bituka. A plate of tokwa't baboy - sliced boiled pig ears and lightly fried cubed tokwa (tofu) drenched in spiced vinegar and soy sauce - on the side add heft and protein, as well as more texture and flavor.

Since I am in Cavite, where seashells are aplenty and always fresh, not to mention succulent and fat, I thought it would be nice to try clams in lugaw. I've tried North Park's congee with Pacific clams and it was a good break from the usual meat versions. Healthier, too, I suppose, because it has only half the fat of a meat version, but it contains high amounts of iron, managanese, niacin, phosphorus, potassium, vitamins B2 and B12, zinc, and, believe it or not, vitamin C at 49% RDA of a 2,000-calorie diet. (Nutritional details here)

With all the congee condiments and flavorings, plus a bonus rind of fatty pork chicharon, this lugaw was rich and flavorful, a bowlfull for breakfast so filling that I totally skipped lunch. It was just so nice to sleep through the day, anyway.