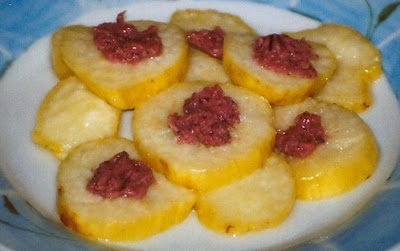 We call the kasuy/cashew "fruit" in Pangasinan puso, accent on the last syllable but referring to the same thing in Tagalog, because it is shaped like a heart. I realize now that this adds more to the confusion - I read somewhere that this heart-shaped pulpy accessory is the fruit, and the cashew "nut" is the seed that grew outside of the fruit, making it a solitary aberration.

Enlightenment reveals the puso is called an apple, and the fruit is the hard case encasing the seed that is commonly referred to as the nut (at least that book was correct in one aspect).

The Pangasinan term for kasuy/cashew is maloko - probably because of that outgrowing seed, trying to outwit us all (I'm just trying to be funny, but who knows?). 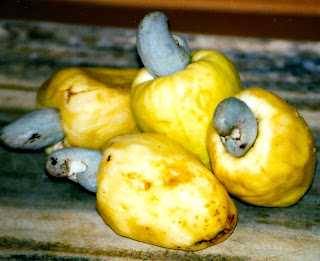 Anyhow, it is maloko season, each and every twig weighted down by the "fruity (and nutty?) apple" high up in the tree that you'd need a long pole to pick one up. Of course that is if you're impatient enough, because once each and every apple has ripened they would proceed to just loosen their grips on the twigs and fall down to the ground, laying a feast for man and beast on the pavement.

Unless you particularly value the cashew apple. I grew up eating it because diabetes runs in the family, and the cashew apple is believed to be potent in stabilizing blood sugar.

So my grandparents always had a kalawit (forked pole), to which a net can be attached to catch the fruits, leaning on the tree. 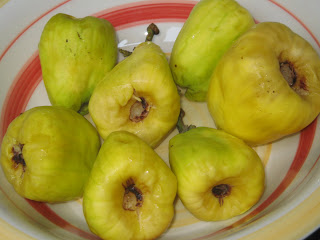 [Decapitated hearts]
I never see puso'y maloko being sold - partly because almost every other backyard in my hometown has a maloko tree, which everybody can access with a kalawit. The cashew apple can be eaten right there under the tree, with some salt but preferably with agamang (alamang, salted fermented krill).

Sliced thinly and topped with agamang, it is a perfect salad to accompany fried or grilled fish, or meats - all in all a simple but apt dinner on sultry evenings. My grandparents' cashew tree produced sweet apples, but the characteristic acidity is always there. This acidity blends well with the meatiness and slight saltiness of the agamang, which are but punctuations to the sweetness of the puso.

These are the only ways I know how to eat the cashew apple. I have tasted the cashew prune made by monks in the island of Guimaras, but I prefer the puso raw and fresh. 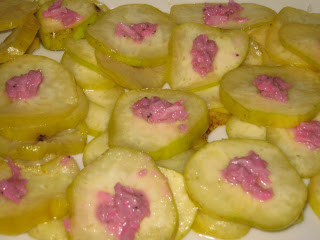 The seeds, or cashew nuts, enliven childhood memories. After separating the fruit from the pulpy apple, they are left to dry out in the sun for a few days. Then these are buried under live coals, until the sappy, pungently oily smell permeates the air.

We were always warned to roast our maloko in the late afternoons, while dinner was cooking, so the chickens have already roosted, thus preventing any disease coming upon them from the burning sap.

It was such heady happiness racing to unearth the maloko and pounding the charred cases with boulders (just big stones, really) to get to the roasted seed in the middle, getting some burnt fingers in the process.

And eating the freshly roasted cashew - the ready-to-eat cashew packets taste bland compared to it. There's nothing in the world like popping the hot seeds into your mouth while inhaling the pungently sweet smell of the burnt fruit, while the sun valiantly held on above the horizon, blood racing in your ears for the sheer joy of that earthly treasure.
Posted by Kai at 10:42 PM

Try eating pancit palabok with slices of kasoy fruit now that it is in season. Yummy! We do that here in Antipolo.

Looks amazing. And healthy too!

Maloko ?? It was a long time that I haven't seen nor eat one. I miss that tart fruit and healthy.

For those technocrats.. I think they could consider the Maloko nuts shell as a good source of biofuels. It packs a good thermal calories in it.

It reminds me during my childhood. I grew up in a Lingayen, and maloko is one of the fruit snacks that are availble to us ...kaimito, kamantilis, mabolo, bolaney, abyang and how about "zapote" (black textured fruit).

Keep up the good work

Yay, pancit palabok with kasuy fruit? That's so unheard of! But I can imagine the blending of flavors, hmmmm, that would be an adventure in taste!

Bert, calling DOE!
I'm not familiar with zapote - I hope there's still some trees these days - I'd like to try one. Mabolo, yes, we had rains of fruit falling from the numerous trees scattered in the lawns of my elementary school. Never tried it, though - I heard they produce gas.
Abyang? Bolaney? We didn't have these - or maybe we have but known by another name?

Irineo, the smell, and the taste, of newly roasted kasuy really gets me poetic, hehe!

I've been visiting your blogsite for sometime now and wow you're touching base with all the things/food I grew up with. I'm also from Pangasinan (the white ears version)so you know which part I came from. Anyways you ever tried to cook w/puso'maloko in sinigang style. Whew, it one of the best. My grandma had taught how to make it. Use live catfish or fresh Bangus from Dagupan and wow. I used to call it "enselar ya sira ed puso'y maloko".

Hi Jerry, thanks so much for sharing that. No, I've never tried it! We don't cook it, except maybe pickling. Which is funny, because we're just practically neighbors (apegley kami manaya na aray amalanga tan amutin layag, haha).

What we eat is inselar with puso'y pontiwhich I guess is common. Maybe they would have the same effect, because of both their sap content, but with maloko I imagine there would be a touch of sweetness, which would complement bangus very well.

Again thanks, I'm planning a maloko cookfest with palabok and inselar!

I can't wait for your blog on maloko cookfest with palabok and inselar! That's gotta be good. You're making me wish I could fly out to Pangasinan in a New York minute. I haven't been back for
32+ years. Again thank you for sharing all your recipe.

Whoa, that's a long time to be away! It's high time for a visit! I bet you won't recognize your hometown anymore.