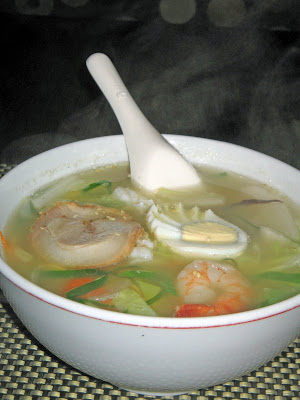 
Concerts at the Cultural Center of the Philippines (CCP) usually mean a time for catching up with friends. It is an honored tradition among my concert-going group that we meet for an early dinner before watching a concert, then debrief with an analytical discussion of what we have experienced in a cafe afterwards.

There were a few choices for dining during the time I started watching at the CCP, about two decades ago. Malate was the nearest, a good four blocks away, and it became our favorite hang-out, as we explored the melange of food venues in the area.

Emerald Garden, about three blocks farther, was an alternative choice, as were United Nations Avenue, the Grandstand Harbor and Kalaw Street, although these haunts were more suited to concert-going at the Philamlife Auditorium.

There are many choices now, in and around the entire reclamation complex. There are many squares hosting restaurants, food spots, seaside palutuans, and that hefty Mall of Asia (though I'm still a bit clueless as to the dining places - nothing really exciting for me).

The opening of the Harbour Square by The Promenade, beside CCP, was a welcome treat for concert-goers, who could dine in a leisurely pace, and cross the road to CCP five minutes prior to the opening bell.

The Harbour Square, though, hosts restaurants found in most malls and squares across the metropolis. That is, nothing exciting. I need to be keyed up before a concert, especially one held at the CCP. A cerebral experience should be preceded by a meal that's as worthy. At Harbor Square nothing excited me.

But as fate would have it, right before the last two concerts I attended at the CCP my favorite restaurants along Roxas Boulevard were full-packed, waiting lists as long as two pages. I didn't think of calling in advance, so I had to woefully leave.

My concert companion and I were left with two options then. It was either watch the concert with an empty stomach, or stomach the restaurants at Harbour Square. We chose the latter. Because of one restaurant (make that two, the other one to be covered in a separate post) that we were more than willing to dine in.

Rai Rai Ken Ramen House and Sushi Bar was where I ate my first ramen more than two decades ago, when it used to look like a traditional Japanese ramen house, with bamboo slat walls and the painted curtains. They used to serve ramen in two sizes - the regular size in a humongous bowl, and a smaller size for a quick snack.

It has since been repackaged to sport a trendier look, to attract a younger, more casual crowd. I noticed the repackaging was instituted around the time that Teriyaki Boy penetrated the market (the interior design is based on the same concept, and I heard that it was done upon the passing of hands in management to the younger generation), but I was told that it had been planned, and executed, before that. 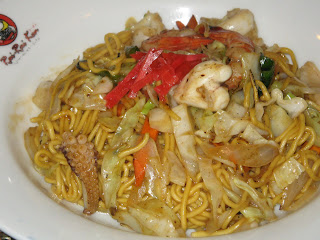 The menu also undertook a reformatting, resulting in the ramen bowls served in only one size - smaller than the Japanese bowls, but with the advantageous outcome that they are cheaper (technically they're not, but it is perceived to be otherwise).

I have since been to Japan, subsisting on soba and udon and ramen in hot soups in my wanderings across that country, and back. Coming back here I continued to patronize Rai Rai Ken - even though I've moved on when it comes to the best ramen house (that's Shinjuku for me, along Makati Avenue, but there's only one outlet and the serving size is humongous) - a cheap and accessible means of fulfilling any craving for Japanese noodles that arises from time to time.

And it is the noodles I focus on at Rai Rai Ken. The ramen is as good as ever, fresh and stickily chewy - i.e., malagkit, or makulnet if it were a rice dish, or al dente if it were pasta. Way better than any other noodle, hand-pulled or otherwise. The closest rival I've ever encountered was the chao long noodles in Puerto Princesa.

My all-time favorite soup, gomoku (pork, seafood and vegetables), is done well at this ramen house, so I invariably order gomoku ramen. Sometimes I try the gomoku yakisoba, which is stir-fried ramen with the ingredients of gomoku. At Rai Rai Ken the yakisoba sauce is a bit spicy and hints of curry. 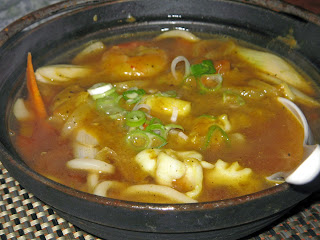 I also try other ramen bowls with each visit, like the Kantonmen (Php165), a Rai Rai Ken original, which is boiled noodles in curried sauce with seafood. The photo shows kanton-udon - with udon noodles. The curry sauce is typical Japanese - sweeter and not as pungent as the curry in other Asian cuisines.

All ramen dishes can be had with udon, with a corresponding Php5 premium. 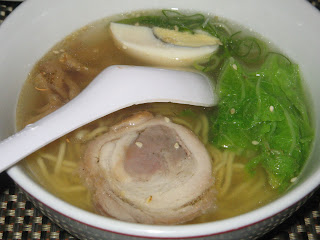 Shio Ramen, Php135 - pork, boiled egg, leeks and polunchay in salted broth. True to its name (shio means salt), the soup is a bit too salty for my taste. 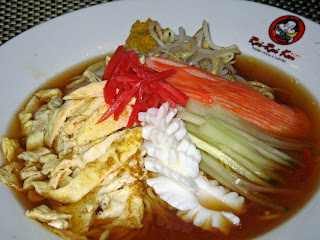 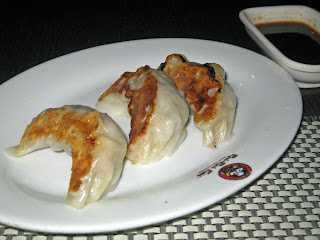 For a long time Rai Rai Ken's Gyoza (3pcs Php55, 6 pcs Php105) was my standard for which other gyoza are evaluated. It has since shrinked, the pork filling now a lot less, but the pork-to-cabbage and dumpling wrapper ratio is balanced, and still tastes good. And the thick dipping sauce adheres to the dumpling, coating and flavoring it substantially. 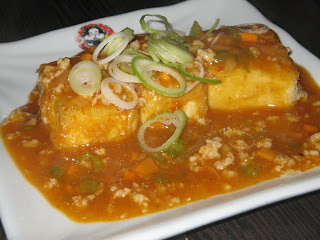 Atsuyaki Tofu (3 pcs Php110, 6 pcs Php210 ), similar to Mabo (or Mapo) Tofu - with ground pork in thick, spicy sauce, only that the tofu are lightly fried before mixing in the sauce. 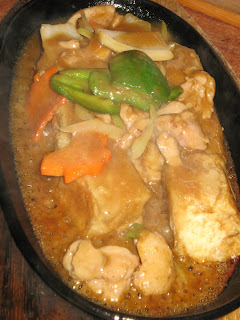 Age Tofu Teppan, Php125, served in a sizzling plate. Contrary to teppan that is grilled on a hot plate, this came in a bubbling-hot, thick, flavorful sauce. 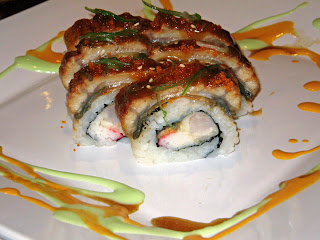 A sample of the offerings under the Crazy Maki promo. Definitely not for maki purists, and definitely not for me. This is Jurassic Maki, Php195 for six pieces ("inside-out roll with ebi tempura, salmon skin, kani stick, ebikko, spicy mayonnaise and eel, with wasabi mayo and eel sauce"). I ordered this because of the eel. I don't know what happened, but this is very malansa (fishy). 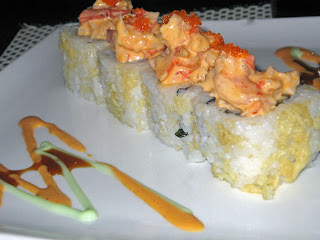 I'm a bit stubborn - I again ordered from the Crazy Maki collection, and this was the last I am doing it. This is Salmon Skin Roll with Shrimp Salad (4pcs Php105, 8pcs Php195). The menu says this should be "California roll with salmon skin tempura, avocado, sliced unagi, spicy mayo and shrimp salad, with wasabi mayo and tenzy sauce," but it tasted mainly rice and not much else. 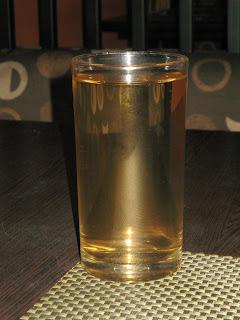 A glass of cold tea, unlike the traditional pot of tea commonly served in Chinese and Japanese restaurants. Refreshing after a sweat-inducing hot bowl of ramen soup. 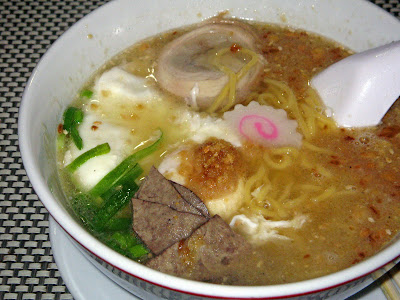 My current favorite - the featured ramen for the month of September. This is - surprise! batchoy ("...pork liver, pork and chicken chicharon and sliced chaiyu and naruto in shio soup"), with the requisite raw egg (Php150). Funny, the regular Japanese and Rai Rai Ken ramen bowls don't have naruto (that ubiquitous pink-swirled fish cake), but this take on the Ilonggo favorite has one. And this ramen, is as Ilonggo as batchoy could ever be.

The service at the two Rai Rai Ken outlets I frequent is inconsistent - attention is sporadic even if there are only few diners, there are very gracious waiters and there are very conceited ones. It seems customer satisfaction is an aspect that was neglected in the transformation of Rai Rai Ken. But I am willing to overlook this, if only for the ramen.


Update: These two outlets has since been closed. The outlet closest to CCP is at the Blue Wave Mall along Macapagal Avenue.

Rai Rai Ken literally means "welcome to the restaurant" (rai rai is welcome and ken is restaurant), and is related to that phrase Irashsaimasen! (welcome!) that one hears upon entering a Japanese restaurant, rai rai being originally pronounced "irashsai", while ken is "shokudo". More about it at Rai Rai Ken's website.

heehee. i've seen this restaurant around, but i have never tried it. probably because i have japanese food at the university shokudo almost everyday so when i go home, i'm like "we're not going to eat at a japanese restaurant" hahaha! ;-)

Haha, right, of course you have to eat Filipino, though don't you miss "Japanese rice" every time you come home? I had withdrawal symptoms for a while coming back from Japan.

Rai Rai Ken is not exactly authentic Japanese, but close. But their ramen is really incomparable.

the mapo tofu looks so delish!

this is really one of the simplest dishes to make anywhere in the world so long as you can get hold of tofu and sauce package.

Here I bought a sauce pack so as to skip all the seasonings! and i will try this friday after work.
http://yummiexpress.freetzi.com

I tried the shoyu ramen and really dislike the spinach flavor in their broth. (read my review here https://maleanabas.wordpress.com/2015/05/24/rai-rai-ken-ramen-review/ ) Maybe I should have given other dishes a try.

Great review! Read about Rai Rai Ken on http://www.webbline.com/rai-rai-ken-sm-fairview-branch-review/ and I think it's pretty awesome! :)

Hi! I read about Rai Rai Ken also on http://www.webbline.com/rai-rai-ken-sm-fairview-branch-review/ amd it made me want to eat Japanese food just like in your review! I love to go to Japan someday to taste authentic Japanese dishes :D