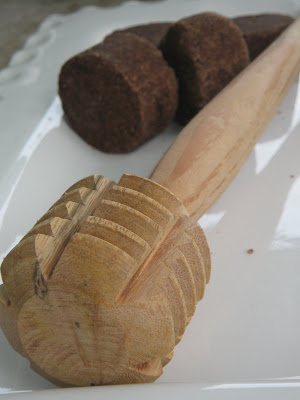 I grew up drinking hot chocolate made by my family, the entire process of making it performed in our very own home - in the backyard, front yard and kitchen. This chocolate - tsokolate tablea, chocolate tablets - is made specifically for drinking, and the process has been handed down from generations of ancestors.

But this process of chocolate-making is not exclusive to our own family, nor even to my hometown, nor even to my province. This kind of chocolate can be found all over the country, with a specific culture surrounding it in each region - what is added to it, what form does it take, how it is served (what implements, utensils are used), what is eaten with it, when it is drunk, how else it is cooked, etc.

What is common across ethno-linguisitic cultures, though, is that it is boiled into a hot chocolate drink, and it is also used into the Filipino breakfast comfort food, champurado, consisting of sticky rice cooked in chocolate, like some sort of chocolate porridge. Again there are variations as to how this is eaten, because some add flakes of smoked fish, or salted fish.

In my family we made and drunk, drink, hot chocolate purely and simply, just add sugar, perhaps a cup of milk at the very end of the boiling. The hot chocolate is tangy and gritty, with a thin layer of bronze cocoa oil on the surface of the drink. The kids and I like our hot tsokolate with a generous sprinkling of cinnamon powder.

In other regions, though, as I've mentioned, an entire culture is involved in the drinking. And in several locations, they make use of an implement, called a batidor, or a batirol, or a mollinillo, which is part of a two-tool machinery.

The batidor is a carved wooden tool that is referred to as a chocolate beater. The chocolate drink is put in a special container shaped like a jug with a narrow opening and a bulbous bottom, and swirled and whisked by the beater. 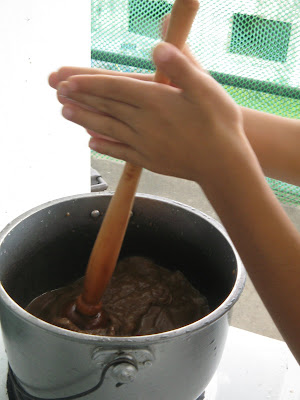 In other regions the chocolate mixture is beaten while it is still merrily boiling in the pot or deep pan. It prevents burning of the chocolate, incorporates the sugar and milk, and helps smoothen the drink.

In both methods, the batirol is placed vertically into the pan or jug (called a chocolatera, but is also called a batirol), the carved bottom submerged in the chocolate mixture, with the handle placed between the palms. The handle is then rolled, each hand alternately pushing and pulling in swift fashion, keeping the batidor within the vicinity of the middle of both palms. I don't know if I'm making sense here, but it is akin to rolling a piece of clay dough between your hands to form a toy snake, or worm, if you prefer.

The rolling - beating - should be fast, to be done in about ten to fifteen minutes, after the chocolate tablets have dissolved and milk and/or sugar has been added (tableas are sold either with or without sugar).

Tableas should be cooked in a deep pan, because the mixture boils over. Ideally, the proportions should be one cup, or less, of water per tablea. I usually take away a cup, to be substituted with the milk later on. The tableas are put in the water and brought to a boil with the lid on. Once the mixture is boiling briskly, reduce the heat, and be on stand by to take the lid off when the mixture is starting to boil over. Let boil covered until the tableas have completely dissolved.

The chocolate mixture is now ready to be beaten. After five to ten minutes of beating, add a cup of milk, then beat again. Adjust sweetness by adding more sugar or water. Beat for about five minutes more, then serve.

Another way of doing it, which is simpler and a sort of short-cut, is letting the chocolate mixture cook completely, adding the milk and letting it boil over once, then beating for about ten minutes over low heat.

Either way, you get a smooth, milky chocolate drink, without the usual grainy/gritty texture. The traditional accompaniment is suman, a roll of glutinous rice cooked in coconut cream and steamed wrapped in coconut or banana leaves.

It is also drunk with pan de sal, the ubiquitous Filipino breakfast roll, with or without filling. A great combination would be a thick slice of kesong puti or kasilyo (the local white cheese made from carabao's milk, similar to buffala or fresh mozzarella), or any other fresh, raw cheese, sandwiched between a sliced pan de sal. If without filling, the pan de sal is nice to dunk into the cup of steaming chocolate before taking a bite.

The chocolate drink can also be had thick, either by reducing the amount of water added, or cooking and beating it longer, until about more than half of the mixture has evaporated. This is also drunk, but more as a dip for crullers. This is called tsokolate eh, for espesso.

The thinner version is called tsokolate ah, for aguado, meaning watered down. The terms came from the Spanish, from whom Filipinos imbibed the chocolate making and drinking culture.

For a time, the thinness and thickness of the chocolate drink served signified which part of the social divide the drinker belonged to. The eh was for the ruling class, the ah for the common, ordinary people. But that period has thankfully long passed, and anybody can now enjoy his or her chocolate any which way. Even just biting into the tsokolate tablea.
~ ~ ~

*Batidors/batirols are sold in stores selling kitchenware, and in the houseware section of most department stores.

I remember seeing chocolate made this way. As far as champorado I take leftover rice add water and boil it till it is mushy. Then I add Nestle's Quick Chocolate Powder (already sugared). Fast and easy. Then I add can milk and sugar and boy I am in heaven. Roz

Oh I wish you guys would answer in English so that I could understand what you are saying. Roz

Why, tsokolate is everywhere, Bursky! Just open your eyes! But frankly, the best ones I've had were the sikwate from the Tabo-an market in Cebu, for the dark chocolate taste.

But most groceries carry tsokolate tableas in foil wrappers. And most local chocolate shops - Kape Isla (Serendra), the regional kiosks at Market!Market!, Tsoko.Nut, the weekend regional fair at SM malls (by the supermarket/hypermarket).

Tita Roz, champurado is certified comfort food. Bursky was saying he misses tsokolate more so that Christmas is fast approaching, and wonders where tsokolate can be bought....

Thank you for explaining it to me. I have champorado all the time. You are right it is a comfort food. I have had it for 74 years and can never get enough. Even my daughter, Mrs. L, loves it. In fact, I am going to make it for breakfast tomorrow morning. Salamat (sp?) for the translation. Roz