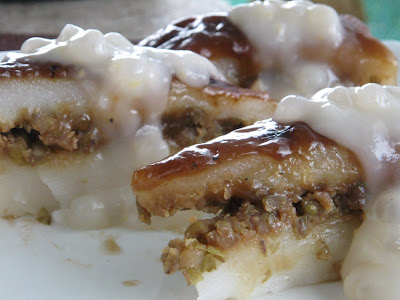 Fiesta was celebrated these last two weekends in Cavite, though I don't really know for what, as this was the third fiesta that had been observed this year.

I'm not yet privy to what Cavitenos serve for fiesta, because I waited in vain for invitations to partake of home-cooked fare. It is the husband who has social relations with locals, while I'm closeted with neighbors who are transients themselves and come from all parts of the country. Since the hubby is out of town, there had been no opportunity for house-hopping around town.

I observed the fiesta, though, in the public market. It was abuzz with vendors who were offering premium items, and shoppers who were lugging more than the usual market basket. There was karaoke singing, and lots of prawns, tangigue, albacora, plus an inordinate amount of fresh mountain vegetables.

It's a bibingka, the kind made with ground glutinous rice and baked in a sokugan or lasong, which is a thick, shallow earthen pan. It is also buchi (or butse-butse in Pangasinan), because the center is filled with mashed balatong or monggo (mung beans). Plus, it is kiniler (rice balls, bananas, jackfruit, kamote and other rootcrops in coconut cream, or ginataang bilo-bilo), too. 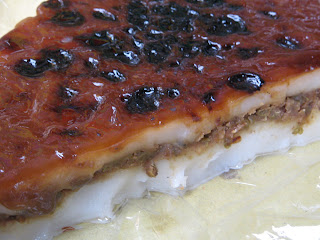 The vendor had a bilao (woven wooden winnowing tray) of mongo-filled bibingka, and a large tin container of ginataang sago. 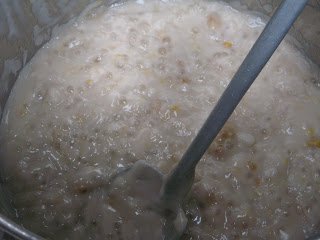 The bibingka was a novelty for me, and it was what drew my attention. We had fried round doughs filled with mashed monggo in Pangasinan, but not this kind of bibingka. The vendor made a sales pitch by saying she'd give me lots of sauce to go with the bibingka.

It turned out that what I mistook for two separate products were two components of one special kakanin. The bibingkoy is eaten with the ginataang sago spooned onto it as topping.

It was grand. And it was festive. That is, only if it were cooked well. As it was, everything was bland. If enough sugar had been added, both to the mashed beans and to the ginataan, it would have been a fairly lavish piece to serve on a fiesta. Which goes to show that good kakanin is best cooked at home.

Hello Kai,
From the picture, the white part looks like tikoy. Is it gooey like tikoy? It's interesting!

the bibingkoy looks yummy!! is it available here in manila?

Sorry I've only come across bibingkoy in Cavite :-(

Hi, where di you taste this Bibingkoy, I also tasted one but it was in Tanza.

Hi, Dawn Read, I came across this bibingkoy at the public market of Cavite City. So it's a local delicacy of the province of Cavite, if you saw it in Tanza.

Hi Kai, You can get the best Bibingkoy from Aling Ika's Carinderia in Cavite City Public Market. And If you're looking for a place where you could eat authentic Caviteño cuisine in Cavite City, visit Asiong's Carinderia, 712 Paterno Street. Parallel to the Main Road, P. Burgos. andd look for Sonny Lua, the owner. Any tricycle driver in Cavite City. Would know where asiongs is. You should have "Pancit Choko en su Tinta" or Pancit pusit in it's own ink. But you have to order it ahead of time. Also, if you want to get excited with Cavite Cuisine, I wrote the June 2008 Food Magazine cover story about Cavite coastal cuisine. I'm sure you can get back issues in Booksale or ABS-CBN. Have a nice day!

Does anyone have a recipe for bibingkoy?

I am dying to eat this bibingkoy,so please if anybody knows of this great recipe,would you kindly share it with me,I was born in Cavite City and grew up eating this heavenly food!

I have gone to Aling Ika's Carinderia at the public market in Cavite City, as Mr. Guillermo Ramos has so kindly advised. The bibingkoy there is outstanding. Unfortunately it is not always available during the days I go to the market so I haven't been able to feature it here. I'll keep trying, and I hope I get to work up enough guts to ask how it is made, so I can try to recreate it at home and share a recipe here.

Aling Ika's bibingkoy recipe is a guarded secret among her heirs. The one running the carinderia in the mercao are her children. Way back in 2006 we were lucky enough to get the owners of Align Ika's carinderia to show the steps in doing the bibingkoy through Island Flavor TV show. Anyways, just visit Cavite City once in a while ( best time is on Sunday morning so that you can have breakfast at Aling Ika's carinderia and spend your lunch at Asiong's , and if oyu can spare another half day why don't you spend your dinner at Chefoo's Restaurant to expereince authentic Sangley dishes.. egg fooyong is unbeatable.

Yes, it's best to experience it in Cavite, but I think bibingkoy is not that hard to replicate. I'm trying to come up with a recipe, though of course I don't think whatever I come up with can measure up to aling Ika's. But I've been enjoying the treat and promise to at least come up with a decent feature about it soon.