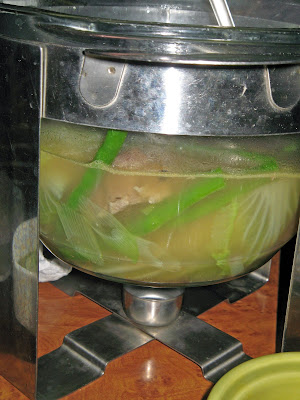 It's quite difficult to find a decent dining place in Cavite City, and the neighboring municipalities, for that matter.

Apart from the usual fastfood joints, what abound are carinderias, while there is the requisite panciteria (an eatery serving stir-fried stick noodles) and a Chinese restaurant.

At the nearest neighboring town, Noveleta, the choices widen, but I've had nightmares going there with the family during holidays when all the househelp are on vacation, and we'd rather eat out than deal with a crying infant while I vainly tried to stir a half-burnt sauce.

The restaurants look good - there is a steak joint, a pizza-pasta-bakeshop place, an "authentic" Japanese eatery catering to the expat locators at the nearby EPZA. And further on in Kawit there are nipa huts specializing in grilled and sizzling local dishes.

But all these, and I mean all, are closed on Sundays and holidays. We've experienced having a Christmas lunch, a new year's day dinner, a birthday, at Jollibee and McDonalds, after finding one restaurant after another dark and shuttered. Pathetic.

So we've started rounding up some restaurants we've probably overlooked in Cavite City, in the hopes of finding more accessible and readily available eating places, when emergency strikes. Although now with the baby turning one and all, and walking to boot, I think I'll be able to handle holiday feasts this year. 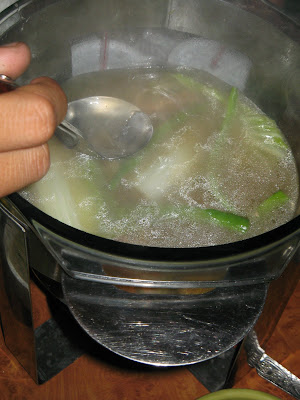 We usually have Sunday dinners at the local panciteria when the nannies take their day off, so it has ceased to be a rather "special" place to go to on occasions fit to be celebrated with a finer meal.

My husband has been passing by this hole-in-the-wall for quite some time, labeled Asao, which I can't figure out the meaning of - the owner must have a relative in Japan. So one evening we decided to try it.

We ordered bulalo (beef bone and marrow boiled for hours, served in its broth), but what was served was more like a bony nilagang baka (beef chunks boiled with roots and leafy vegetables). And the soup did not have the richness and taste of hours of boiling, but rather of boullion cubes.

I was charmed, though, by the serving dish - not the usual ceramic bowl, or clay pot, but in an individualized clear dish with warmer, a thoughtful touch, but is actually critical when serving beef soups so it keeps warm and does not congeal. 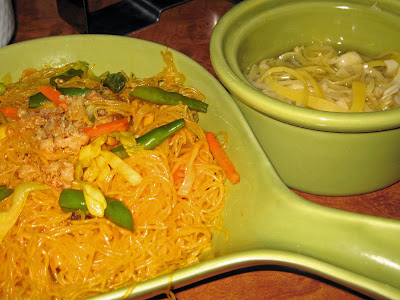 But the more interesting find that dinner was this pancit (noodles), called pancit puso ("noodle heart"), my first time to encounter such, though later on we'd find it in other carinderias in the city.

It is the usual Filipino stir-fried noodles, this one colored with achuete (anatto seeds), but the reference to a heart has to do with the accompanying pickled puso ng saging (banana heart).

The usual pancit is mixed with a squeeze of kalamansi juice, so that the saltiness is tempered with a dash of sourness. In pancit puso, the pickled banana heart takes the place of the kalamnsi.

The pickled puso is mixed into the pancit, and you get alternating bites of salty pancit and chewy, sour-sweet heart, which makes it refreshing, and before you know it, you've finished the whole plate.

If only for the pancit, I'm willing to go back to Asao. And probably try other, interesting, dishes, too.
Posted by Kai at 10:48 PM

Looks good. Been having a strong craving for bulalo lately.