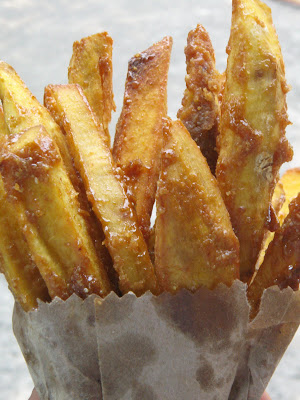 The first time I went to Cavite, when the family was still on a weekender mode, more than three years ago, I saw these fat, sugar coated fries being cooked by a vendor outside the gate of the compound where my husband worked and lived on weekdays.

They were cassava fries, made from the tuber of the kamoteng kahoy or balinghoy (cassava wenno manioc), cut into wedges, fried, coated in sugar, then refried. They had a distinctive aroma - like that of a bakeshop, or how a house smells when a cake is baking - with a chewy, almost malagkit texture.

The taste was also more of a pastry's than a starchy root's, and I became an instant fan. Cassava fries became the treat I looked forward to on weekends whenever we visited Cavite. I never saw it anywhere else, kamote fries (made from kamoteng waklay, or kamote - sweet potato, Ipomoea batatas) being the more common fries (aside from the fastfood, potato kind).

It continued to be a weekend treat when we moved into the city. Much as I wanted to, I couldn't have it on weekdays - the stand hasn't opened yet as I leave for work, and it has already closed shop when I arrive.

I could have made cassava fries at home - or instructed the househelp - weekends and weekends of watching the vendor fry them up has made me the wiser on the procedure (and I actually asked how, and was given a favorable reply), but I had been afraid that having them frequently at home would somehow make their novelty fade. Plus, the amount of oil that the frying would consume might have turned me off.

Though I seriously considered, when the vendor disappeared for several months. It left me taking furtive longing glances at the closed and empty stall. But he came back, with a pregnant wife now working beside him. And I was happy again.

But now he tells me he is stopping to make cassava fries. People are not buying anymore, because of that cassava poisoning (I don't know which one - several happen every once in a while).

What now? What about the cassava pudding I'm planning to bake? And the pinais? Poeple avoid things for a while, but go back to them when nothing untoward happens again. I hope I can have my cassava fries again. Or I'll be forced to make them myself.

Every time some food is "tainted" (currently it's pistachios here), people stop eating them for a while but gradually once the hoopla is over, tend to go back with buying and eating them with gusto. Hopefully that's what will hhapeen to Cassava's there!

is this the same as CAMOTE FRIES? coz that's what we usually do at home.. we use camote or sometimes even saging na saba.. hehe.. sarap :D

Oh yeah, we've had a bad case of ebola virus on hogs recently, and people avoided pork like the plague. But now it seems people can't live without pork for long, even if it's Lent!

It can be called camote fries, since essentially cassava is considered a kamote, too, but the real kamote fries is softer and sweeter. Cassava is denser and chewier, with a more 'woody' taste.