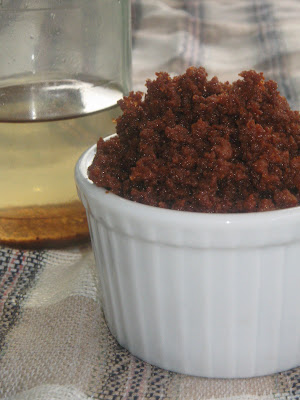 {Langis ng niyog at latik, coconut oil and coconut cream curds}
Fatalistic tendencies, which I find cross borders and transcend cultures and affinities, render us humans attaching an inordinate amount of importance to luck. So we wish one another good luck, be it for a trifle thing or a grand undertaking. And we consider things, places, days, even persons, lucky or unlucky.

In the Philippines we take this to the extreme. Claiming as the only Christian country in Southeast Asia, we are devoted to our religion/s, so much so that we consider any religious event, icon, and the like, lucky. We wipe statues with our hankies to wipe on ourselves (for healing), we carry their carts during processions in the belief that it will bestow upon us blessings, we pray for wins in the lottery. We keep on our house doors the palm fronds used during Palm Sunday as a talisman against lightning.

Holy Week is a venerated time, when a lot of things is forbidden. Laughter is banned, and the spirit of penitence is taken seriously. Good Friday, the heaviest - the most revered - day of the week, is a dichotomy of sorts, as it is a combination of good and Friday, which is usually considered an unlucky day (no wedding is celebrated, nor no funeral is held, on Fridays).

Travel on a Good Friday is considered an unlucky decision, as the risk of encountering accidents is at its highest. But at the same time, the day is the luckiest one can get, and there are things done only on Good Fridays to take advantage of this good luck.

The most well known is the supposed witches' coven on an island in the Visayas. They gather on Good Friday, and it is believed that their powers (healing or otherwise) can reach its maximum level on this day.

In Pangasinan there are no such witches, healers or otherwise, who form a coven. But on Good Friday, specifically at noontime, the whole province is enveloped in the thick, almost rancid scent of coconut oil.

Pangasinenses make coconut oil all the time, for a variety of purposes. But coconut oil, or larak in the local language, made at noontime of Good Friday is believed to possess magical powers derived from the auspiciousness of the circumstance being commemorated. It can heal even in the hands of non-healers. It can even take the place of holy water.

So the day before there is a scramble to climb trees to harvest mature coconuts (it is taboo to climb trees on Good Friday). These are then opened, the meat grated, then stored to be expressed the next day.

In the morning of Good Friday the grated coconut meat is mixed with water, squeezed, then sieved to get the gata (coconut cream and milk). The creamy and milky gata is boiled over a woodfire, stirred occasionally, until it thickens and clears. The cream/milk is reduced to brown curds which sink to the bottom. The oil is then strained to separate the curds.

The curds is called ganuza, or latik commonly. These are used as topping on a variety of kakanin (puddings, rolls, cakes made from glutinous rice), producing nutty accents to the creaminess of the local delicacies. These kakanin are traditionally served and eaten on Easter Sunday, when fasting is over and feasting is in order.

Ordinarily, though, by which I mean outside of the Holy Week, old folks in Pangasinan eat the ganuza along with boiled rice. And ordinarily, too, larak is used for its natural healing properties, way, way before the advent of VCO (virgin coconut oil). It is used in massage, in setting bones, in rituals ascertaining who harmed who, in correcting the position of a fetus in the womb.

Good Friday increases these properties to new heights.
Posted by Kai at 4:44 PM

When I was younger, we used to make coconut oil for home use. We used to get the warm latik, sprinkle sugar on it, and chow it down. nowadays, the smell and the heavy taste of coconut oil in latik make me gag.

You are bringing back so many memories in your blog. I remember this. I loved those curds. We sprinkled them on everything. Roz

My family moved from LA to Baguio when I was not yet four. Coming from the land of Disney and M & M's, my breath was taking away by my technicolor arrival in the Philippines. The first sweet I tasted there was bucaio. I always think of my regal grandmother and the kakanins and delicacies that form the bulk of my personal memories of her. All the way here, this Easter Sunday, in Massachusetts, I can smell the coconut. Thank you.