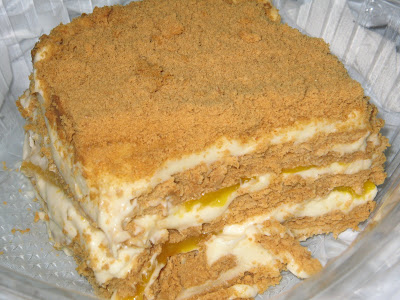 This is probably the best, commercially available mango float in Metro Manila. I was introduced to it by my office colleagues who frequented the food court of the Pacific Star building, where the food shop that makes this cake used to have an outlet.

The office colleagues were addicted to it, but I initially wasn’t cool about trying it. As a general rule I don’t buy mango floats. Or any floats for that matter. For the simple reason that they are the easiest thing to assemble at home. Anything made at home has the advantage of cheaper cost, controlled ingredient list, assured safety and hygiene.

There’s also the subject of ground graham crackers. I don’t particularly like using graham crackers in desserts, finding them lame in taste and texture. And I abhor pre-ground commercially-sold grahams, which approximate sawdust.

I gave in to my colleagues’ constant promotion of this cake just to give it the benefit of the doubt. I took my first forkful with indifference, haughtily thinking I could easily replicate it – nay, make a better one - at home.

But the last bite – I had more than half of the slice shared among me and a couple of friends – was taken with wonder and amazement, that which had grown by leaps and bounds over the course of five minutes.

It was mango float, alright, made with the requisite crushed grahams, sweetened cream and ripe mangoes. Instead of a single thick layer each of grahams, cream and mangoes, the layers are spread thinly in multiple assemblies, like thin compressed floats stacked on top of one another.

But there was something else. There was saltiness in the sweetened cream. And it was thickly viscous, even almost chewy. The saltiness brought out the mangoes’ sweetness, plus its natural hints of sourness, while the grahams acted as the foil to prevent cloyness from setting in. The flavors perfectly melded together, resulting in a deliciously refreshing cake.

And that viscous cream held everything together, so that the itinerant cubes of mangoes stuck to the cake, and the sawdust grahams were into a defined layer.
Of course the cream’s saltiness and consistency are due to the cream cheese, as I found out later. The cake is actually sold as a cheesecake, a multilayered one. But since we were told to get the float and the cake looked exactly like a float, we didn’t bother to ask what it was, and there was no label in the display showcase to tell us otherwise.

So we ate the cake with the expectations due for a float, and those expectations were pleasurably surpassed. I only got to know its real identity when I bought a whole cake, and when I checked the receipt I read that what I had bought was actually a mango layered cheesecake.

The question, though, is this. Had we known it was supposed to be a cheesecake would we have been as happily satisfied as we were? For a float and a cheesecake are as similar as the moon and the sun. In terms of structure, for one, the cheesecake is highly defined. Though the play in this layered cheesecake is that it is thin enough, but multi-layered enough, so that it teases without being stingy.

It is actually a clever way to go around the thickish cheesecake issue that mandates a slice to be shared by about three people so that it doesn’t get cloying. So this layered cheesecake can be finished by just one person. And who cares? Pockets and hips be damned. It is P55 only per slice, and the cheesecake is just about a fourth of the portion in an average cake. This float, masquerading as a cheesecake, or this cheesecake masquerading as a float, has the best of both worlds.

The Other Cakes in the Cake of the Month Series