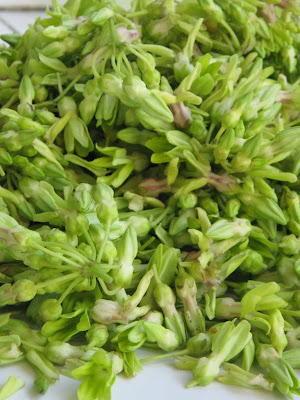 A trip back to the market I inhabited for five years before the family moved to Cavite yielded a cup of bagbagkong (I'm more inclined to spell it as bagbagcong, but using the "k" would be a more Filipino practice, even though the letter "c" is now included in the expanded Filipino alphabet).

This was at the peripherals of the Guadalupe Nuevo public market in Makati City. For a time I had happily sourced my vegetables there because we had lived near the area, and I had found several Ilokano, as well as Batangueno, vendors selling vegetables from my childhood.

I had actually finished my marketing for Ilocano/Pangasinan vegetables that day, but as I turned to leave I was stopped dead by the sight of these tiny flowers, just a handful of them left, inside a plastic bag with the rim turned out. I almost screamed, but in all restraint I just pointed to them wordlessly, my eyes big, to the amusement of the vendor's son. The vendor promptly packed the bagbagkong and handed them to me. I went home feverish, clutching my prize.

It had been five years since I last saw, and bought, and ate, bagbagkong, and it also came from the same vendor. So it was a lucky day that I chose to revisit my old haunt. Previous to this, I think I last tasted this highly seasonal plant in my early teens, before I relocated to Metro Manila for college, and, eventually, work.

But this year is bagbagkong year, it seems. Some weeks after I found the vegetable in Guadalupe we went home to Pangasinan, and bagbagkong inhabited each and every corner of the vegetable section of the public market in my hometown.

Not everybody in my hometown knows about it, though. That first time I found bagbagkong in Makati, the first nanny who cared for my eldest child from infancy and who also came from my hometown, had no idea what it was. This time around the other nanny currently in my household had not encountered it before, too.

Bagbagkong is an Ilokano term, for the plant that looks like a weed, sprouting at the onset of the rainy season. It could be mistaken for grass, if not for the tiny bell-like flowers with a pale green to almost white hue. Some have pinkish to lavender streaks along the edges of the blooms, which sprout in clumps.

I don't know if it is known, much less eaten, outside the Ilocos region. There are many internet sites referring to this vegetable, but most are forums talking about rare vegetables, and many are in the Ilocano language, which I don't understand much. 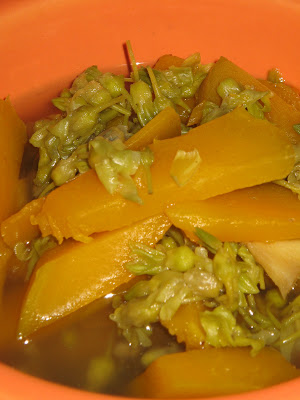 Bagbagkong is typically mixed with squash, boiled with a thin slice of peeled ginger and flavored with bagoong. I find that the squash' natural sweetness is too strong for the subtle flavor of the bagbagkong to shine through.

I like better the other way of cooking bagbagkong - in a stew of balatong or mongo (mung beans), in which any leafy vegetable of preference can actually be added. 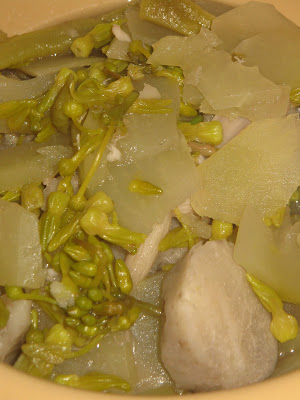 But I like bagbagkong best cooked with apayas tan agayep (hilaw na papaya at sitaw, green papaya slices and yard-long beans), which is how it was cooked in our house while I was growing up. The green papaya, sliced thinly, is actually the base vegetable, and any other, greener, vegetable can be paired with it, like the beans, or cabuey, or saluyot. And the bagbagkong.

In the photo above chunks of chewy luko (gabi, taro root) was added to the stew for textural contrast. The green papaya, sappy, with just a hint of sweetness, tastes mild enough to encourage the shy flavor of the bagbagkong to bloom in the stew. It is akin to sitaw, but lighter, milder. The vegetable's pale hue turns deeper - approximating olive green - when cooked, which also contrasts nicely with the green papaya slices.
Posted by Kai at 10:39 PM

Thanks Kai for validating the information

Where can i buy bagbagkong here in metro manila? or in near provinces like cavite or laguna?

Hello there, I usually see bagbagkong at the Guadalupe Nuevo public market along EDSA, by the street behind Jollibee. It's sold by an Ilokana vendor selling Ilokano vegetables.

I've heard it also appears at the Nepa Q Mart, and at Farmer's Market in Cubao. I've never seen it in Cavite City, and I haven't been to any market in Laguna so I wouldn't know.

Thanks for the info!

I'm planning to buy bagbagkong tomorrow. Do you think it is still available?

Hello, sorry I'm not sure, but it is not available in Pangasinan markets now, so maybe the season has passed.