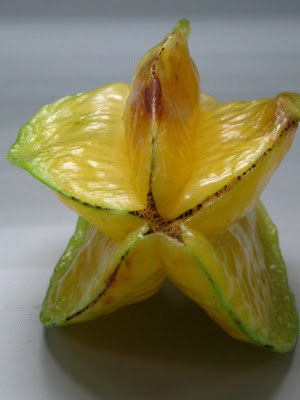 No, I’m not calling you names. Balimbing is actually a fruit, not a two-faced person. And balimbing is five-faced. Well, a worse member of the human race can wear more than five faces, but it’s unfair to associate human folly with something so innocent.

Especially something so pretty, as well. And sweet.

The name has been much maligned with its designation as a disloyal bottom-feeder, and kids grow up knowing the connotation rather than what it really denotes.

I, for one, knew that there is such a fruit, but until now I used to think that it was so named because of hypocrites. And I never took particular notice, since where I grew up the fruit was almost non-existent. I remember having had it once, a small green specimen, but it was so tart I relegated it to the non-edible things I'm-not-eating-again bin of my memory.

Which wasn't really necessary. I never came across it again. I don't think it's popular in Pangasinan, and I don't know how it is called in the provincial language. Balimbing, though, is the term generally used in the Bisaya, Bicol and Tagalog languages. 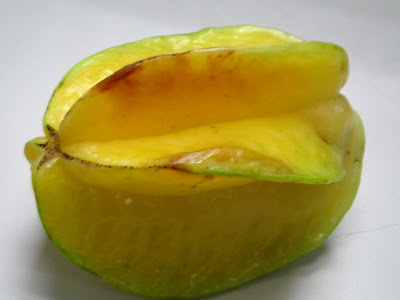 But recently someone went home to the Ilocos, and handed out as pasalubong a large sample, in the ripe color of gold, and just as heavy. It was just a single piece, but to me it was like one of the gifts of the Three Kings, for it was enough to reverse a lifetime aversion.

For this balimbing was fragrantly sweet, and tasted sweeter. It was like eating a crunchy cashew apple, the tangy undertones barely detectable.

I’ve also seen recently a couple of vendors at the Cavite public market selling a few balimbing, green and small things, but it signals that they’re probably in season right now.

Which is just great. Great timing, really. Looking at both ends of the fruit, and of course the sliced cross-section, I see why it is called starfruit. And leading me to realize that I’ve been holding a prejudice, it was like that star in Arabia a long-time ago. 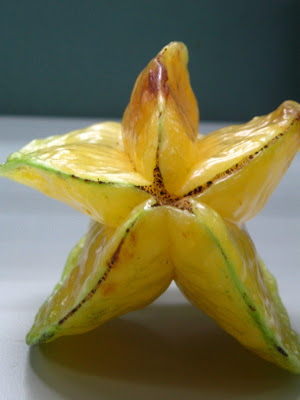 And so in this season of Epiphany, which ends today and means "to reveal" or "make known," my wish is for us to realize our slanted views – our grudges revealed – so that we may start this new year more enlightened, and lightened by the burden we’ve been carrying, reveling in the hope and promise that is unending.

And I’m not being hyprocritical about that. ;-)

Kai, in Ligayen we call it Karnate...
Happy new Year

Happy New Year! Thanks for the ever gracious info, as usual! Without your inputs my posts are sorely lacking, with the internet stinting in its Pangasinan vocabulary....

Karnate...don't think I've come across that name, though.

We call it "daldaligan" in Ilokano. We had a daldaligan tree right near our gate and it's beautiful when filled with fruit. They do look like stars. I keep thinking of it as the "star" tree in contrast to the star apple that we had that didnt look like star at all.

Leah, star apple...yeah, I wonder why it's called such, hahaha.

My daughter loves this fruit.