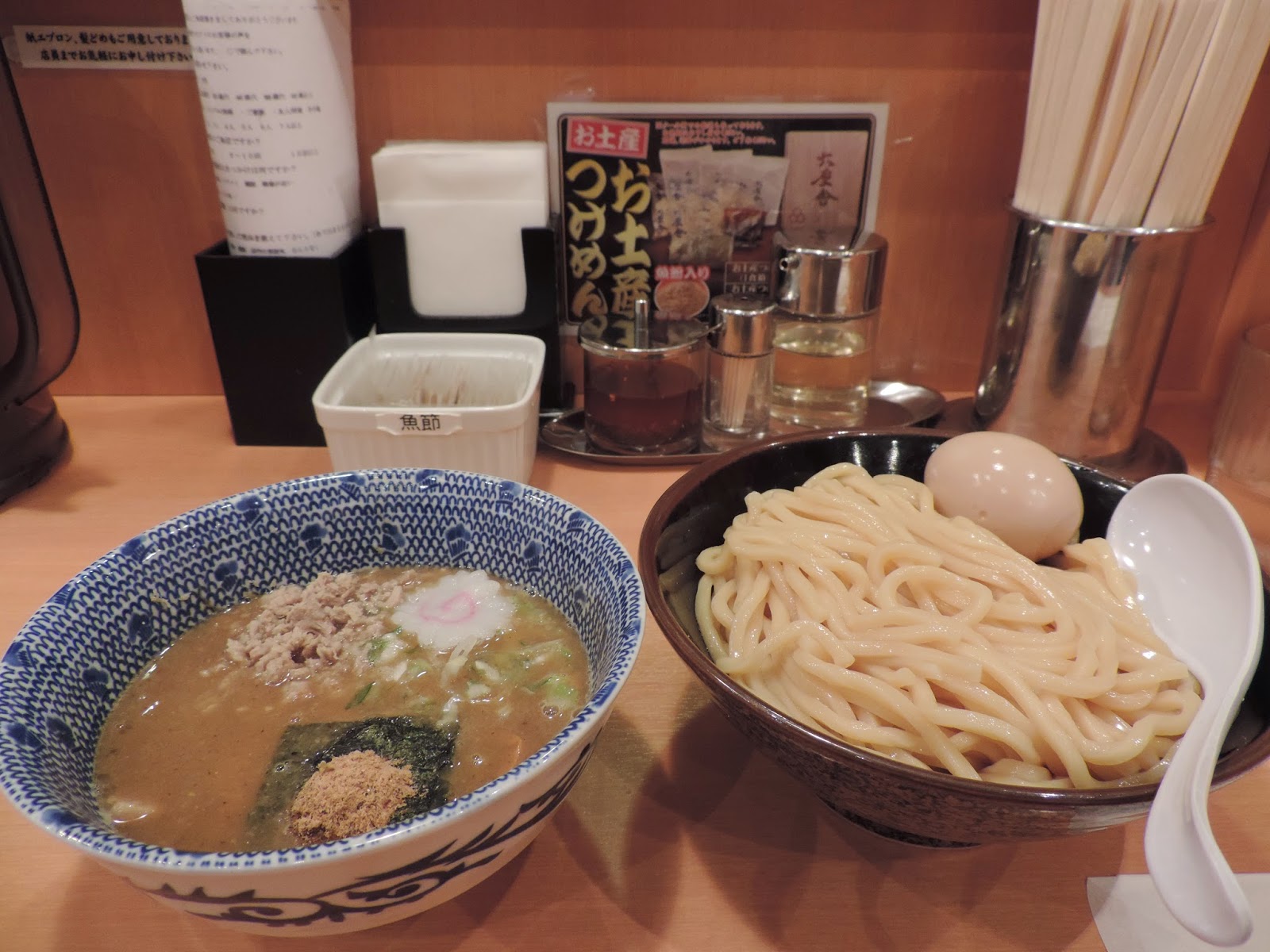 My arrival in Tokyo was a protracted one, despite being on an on-time, 3-hour direct morning flight. I dutifully went to the airport a full four hours before the ETD, which meant I had to leave home around 2AM. As usual I had not slept doing last-minute checks, and I had failed to expect that the budget airline I had chosen to take me to Japan had seats that did not recline (I am never taking a flight with this airline again).

I had known that all food on board was for sale, so I had brought along lunch (no breakfast for me, I had flown from NAIA 1, and all dining outlets there look suspect). But it had been horrible to hear the announcement a few minutes  after we had taken off that consumption of food brought in from outside was not allowed on the flight. Good thing I had a window seat, so I managed to eat on the sly the chicken pie I had bought the day before from Banapple. 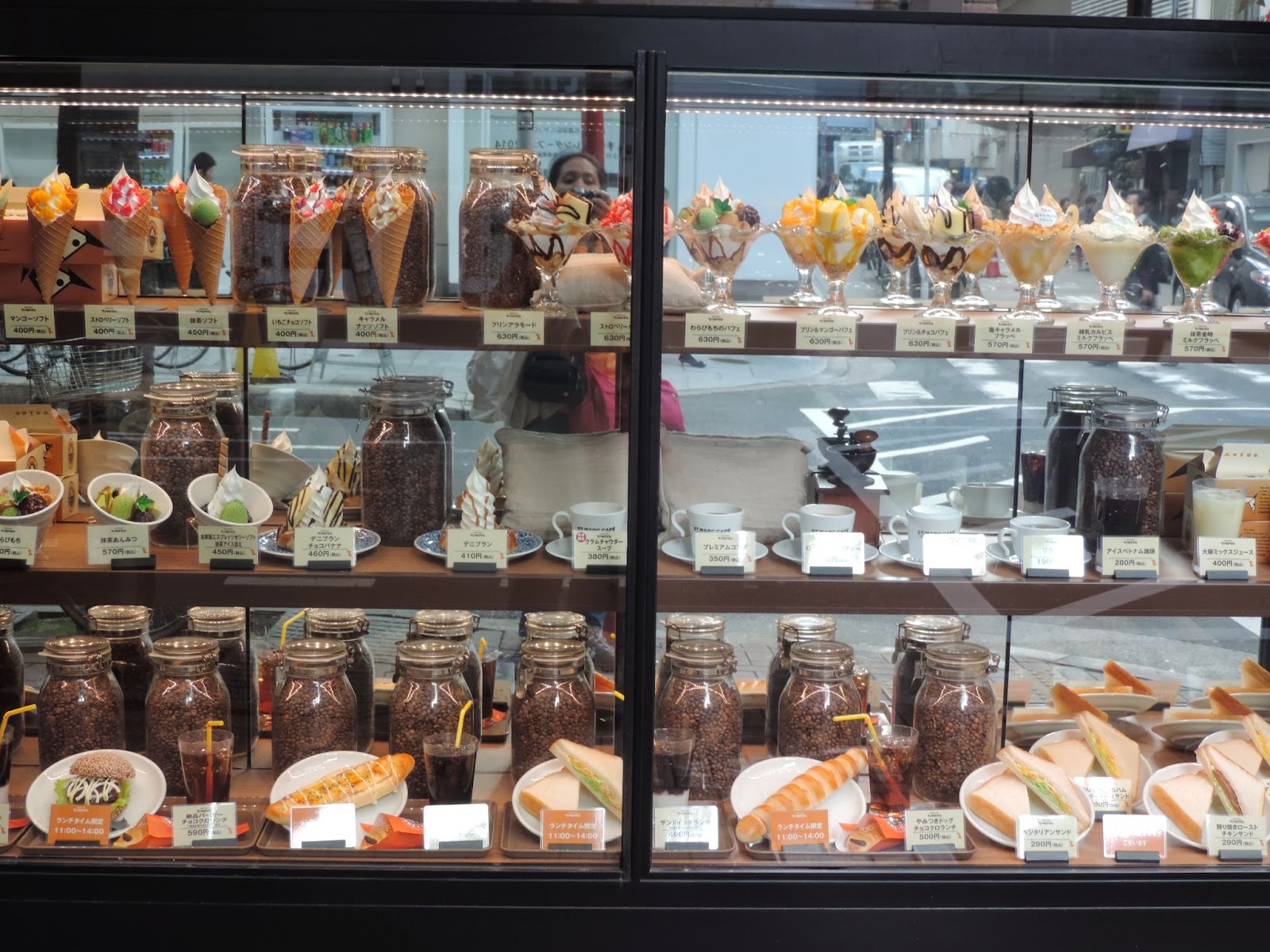 Anyway, I was at the Narita airport after lunch, and after managing my way around the terminal and withdrawing enough local currency from an ATM, I boarded a bus direct to the heart of Tokyo. The bus ride took approximately an hour, then I spent another 30 minutes or so walking to my hotel, which wasn’t all that far, but I took my time ogling at all the window displays and then some.

And so by the time I had deposited my things, freshened up, and changed clothes, it was close to four o’clock in the afternoon, which meant I had about thirty minutes of daylight left. I had planned on going to Shibuya on my first day in Tokyo, to have a photo taken with Hachiko to fulfill the promise I had made to the kids. So I hurried to the Tokyo train station, which was a ten minute walk away. 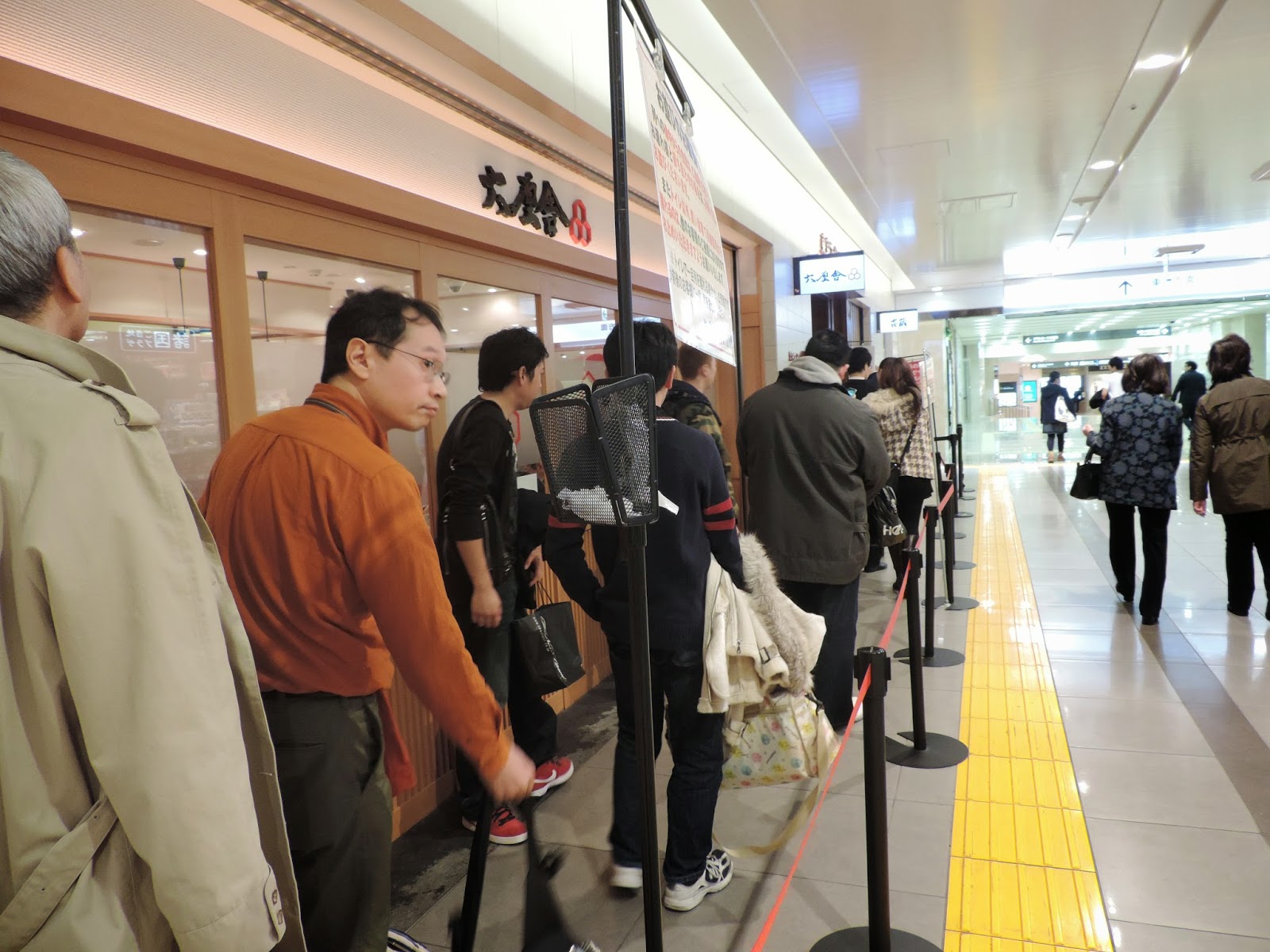 at past four on a Monday afternoon

While I tried to locate the right ticket booth, I chanced  upon this long line of people clad in what looked to me to be office attire, each one toting a briefcase of some sort. I wondered what were office workers doing out queuing to eat at that time of day? Did office days end early in Japan?  But the most important thing I hadn’t known at the time was that I had come upon ramen alley at the basement of Tokyo station by mistake. 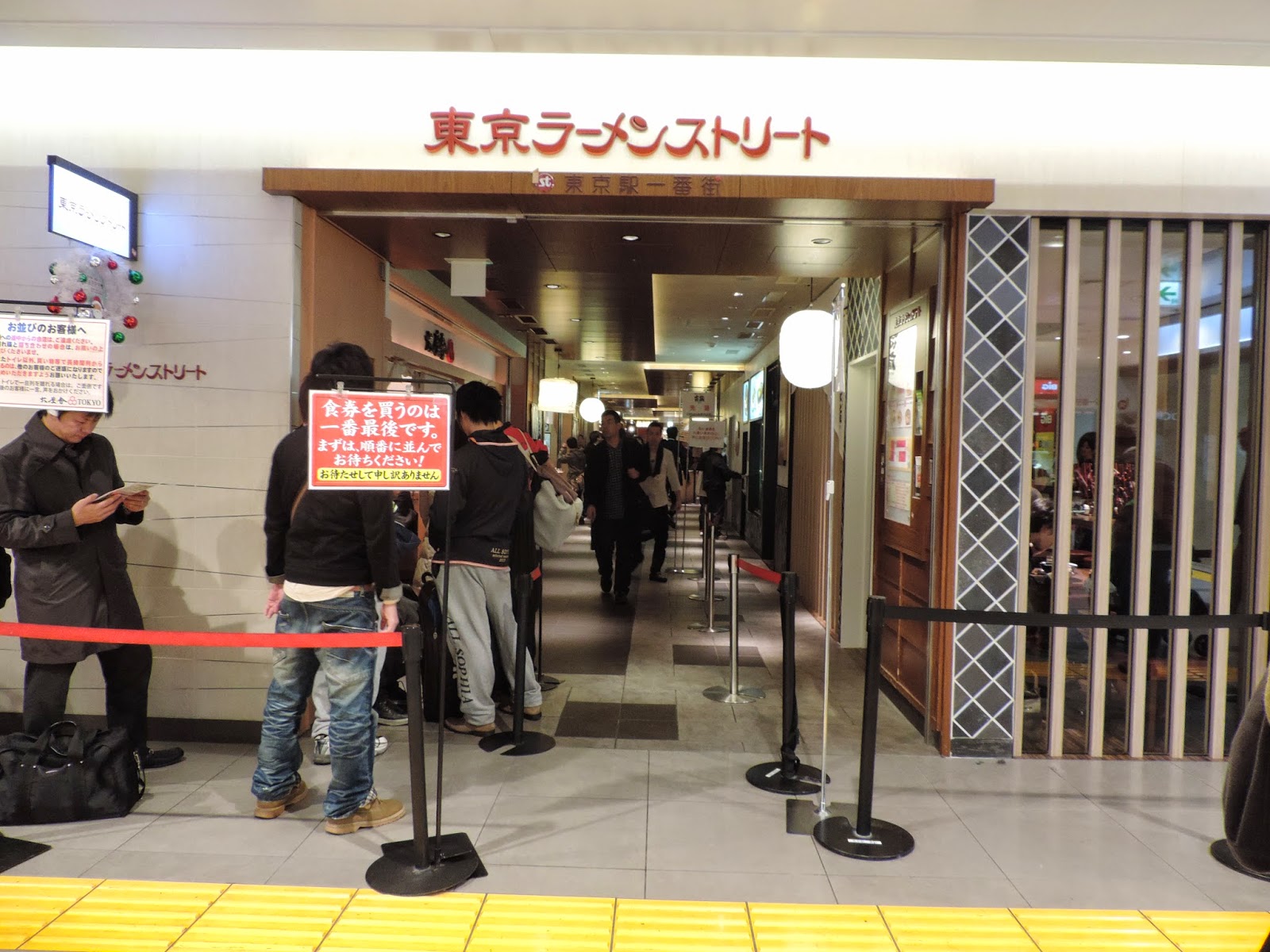 My trip to Japan was for eight days, but this time I did not search every nook and cranny of the internet looking for recommendations on where to eat. This was because Japan was known all over to be an expensive destination, and if I find recommendations to places that turn out to have unreasonable prices, I’ll just be disappointed for the length of my trip. So I decided that I’ll eat wherever I find myself during mealtimes.

It wasn’t mealtime at past four, but seeing that long line made my stomach growl, out loud, and I instantly remembered, and felt, that I haven’t had a decent meal since the previous day.  So I decided Hachiko wasn’t going anywhere and could wait for my visit on another day, and promptly fell in line, which at the moment hadn’t turned the corner yet.  I hadn’t known it then, but I just fell in line for the second most famous tsukemen in all of Japan, and that people queue for it for hours in snaking lines.

I didn’t even know what the shop was called, as the sign did not have an English subtitle, or what it sold. But the line moved briskly enough, and I was able to peer in through the windows, seeing that people were slurping on what looked like udon. I thought it was perfect, that I'd get to eat a hot bowl of noodles on my first day in cold Japan.

Soon, in under twenty minutes, I was able to peek at what’s going on at the end of the line. There was this good-looking usher who asks how many persons for a table, guides the first ones in line to the ticket vending machine, on to the available table, then  comes back to repeat the process. 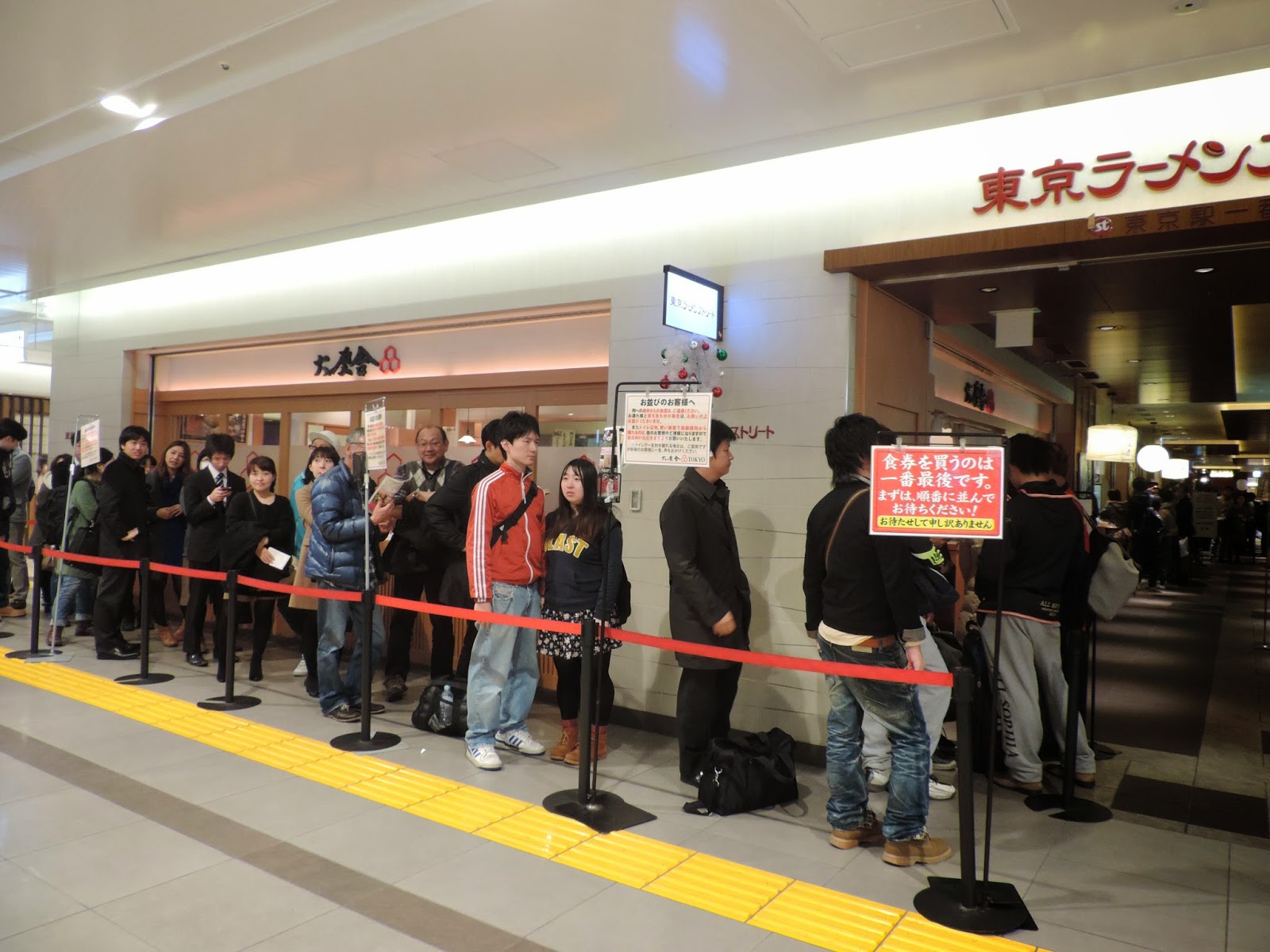 At around seven on a weekend morning

I was able to make out the prices at the vending machine from my vantage point, but because my head was floating from lack of sleep and proper nourishment I was getting mixed up in converting the prices to Philippine peso, so that they came across as out of my league. I didn’t think of leaving, so near the end of the line, so I thought I’ll just get the cheapest bowl of noodles, and make up for the splurge by spending only so much the following day.

But when it was my turn the usher smiled, and in perfect English declared that the special recommendation was this one, pointing to the slot in the vending machine with the photo and price of the most expensive bowl, which I now know to be called tokusei tsukemen. That usher may have been a charmer, for no matter how rock-solid my resolve was a minute before, I inserted my money into the slot he pointed to. 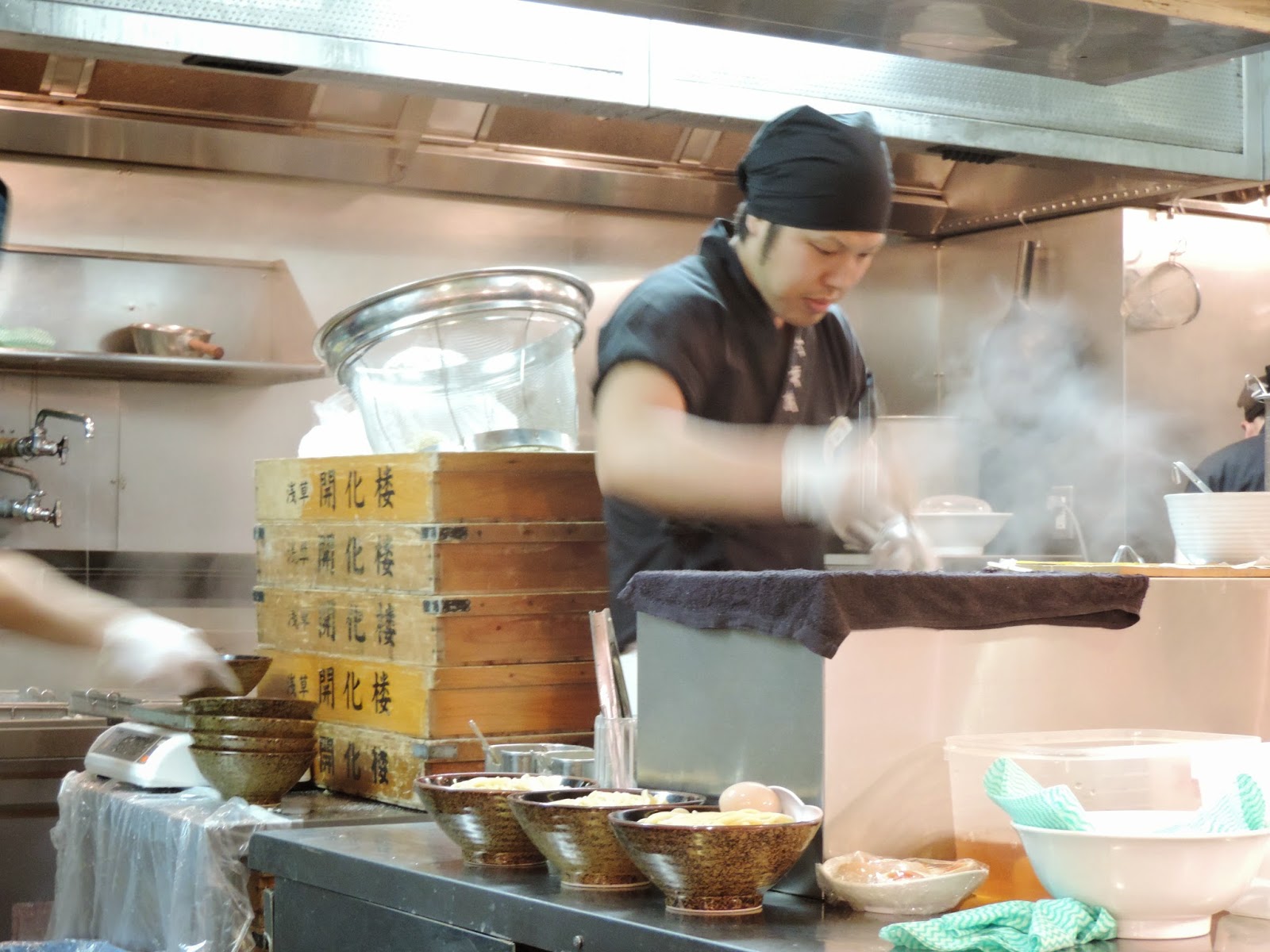 I was seated at the bar – first-timer’s luck is luck ten-fold – where I could stare, fascinated, at the cooks strutting their stuff. The individuals seated around the bar were all males, with age range of late twenties to about the  fifties. The younger ones were taking photos with their phones as their bowls were handed to them. 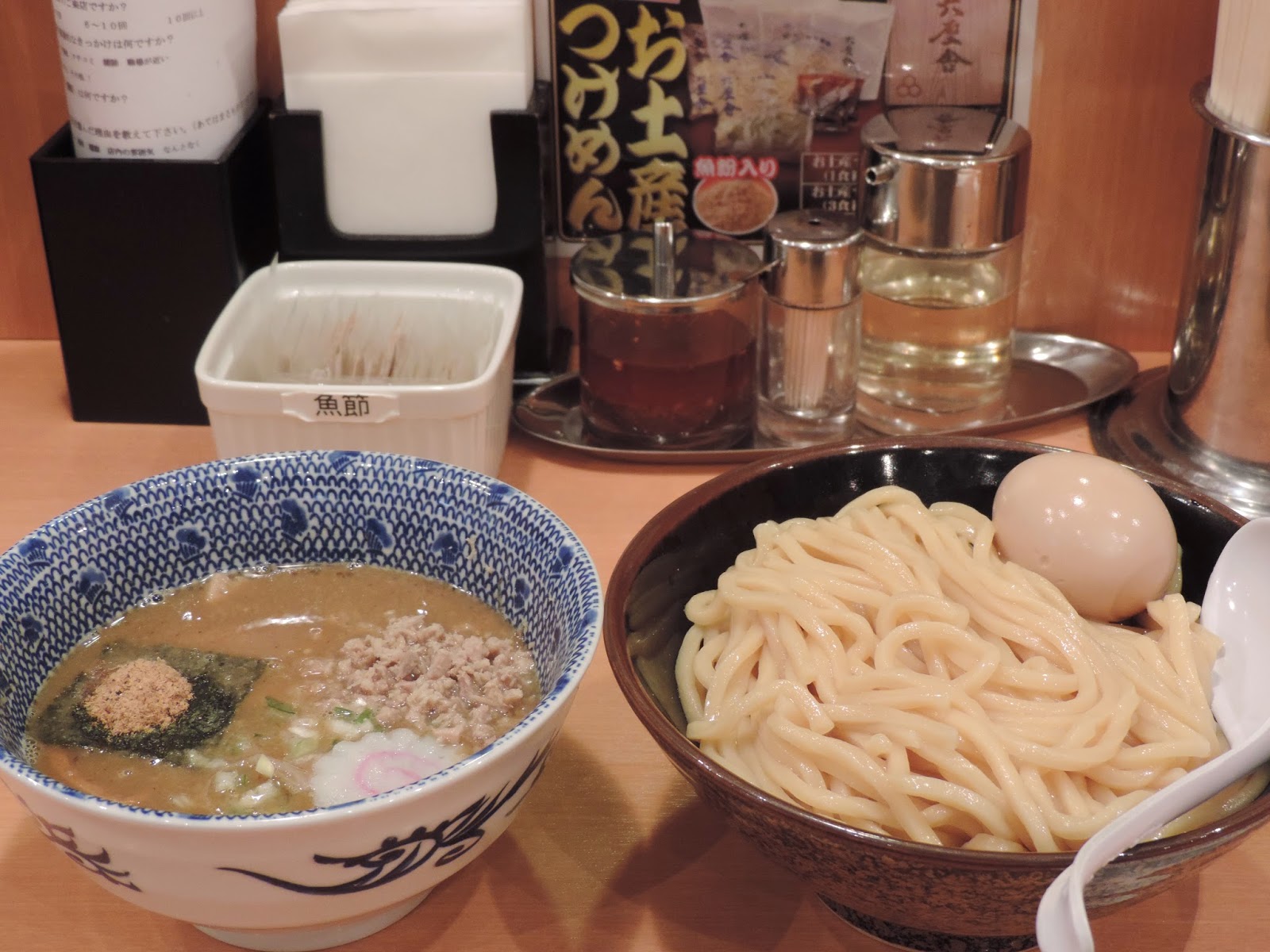 The first thing to land before me was a paper apron, followed shortly by my expensive noodles. It turned out to be tsukemen, the massive current Japanese rage, almost  a deconstruction of the ramen  – broad, firm ramen served cold and dry, with an accompanying bowl of thick soup for dipping. Tsuke in Nihonggo is "dip," while the men refers to the noodles, thus tsuke-men.

The JPY1,050 price tag had been due to the contents of the soup – everything that could be put on it as topping was there – the iconic slice of kamaboko (pink-spiraled fishball), buta hogushi (shredded pork), a square of nori (seaweed), on top of which is a special house blend of bonito powder, negi (chopped spring onion), and deep down at the bottom of the bronzed soup were memma (pickled bamboo shoots) and thick cuts of tender chashu. There was a whole ajitsuke tamago, marinated soft-boiled egg, firm but with a gelatinous center that was viscous and velvety. 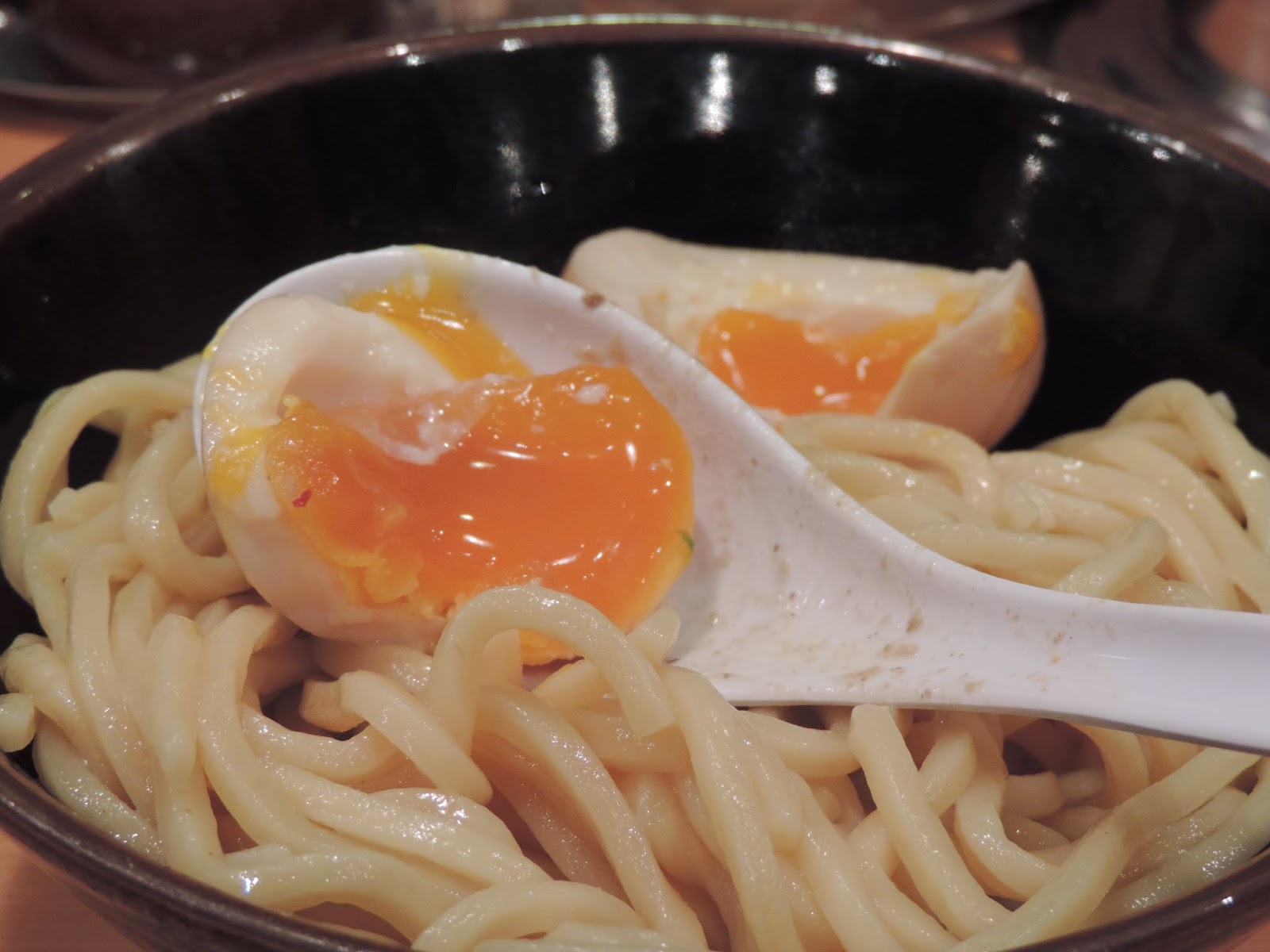 The thick dipping sauce clings to the fat noodles, and there was no way to go about it but slurp, so the apron provided was really necessary. The myriad of ingredients would have been overwhelming if not for that characteristic tangy dimension that yuzu provides. The citrus edge more than just keeps one from taste fatigue, it actually whets the appetite.

Compared with the tsukemen I first tasted in the Philippines, the yuzu angle here is not forceful. It is there, subtly present but not intense, so that entirely the soup comes out well-balanced, with no single component sticking out by itself, all the flavors – umami, salty, peppery, tangy – complementing one another.

As  I ate I maintained my peripheral vision active, so that I saw that the other diners seated along the bar, upon finishing their  noodles, would hand their bowls of soup to the attendants, who would then fill them up from a thermos by the counter. The bowls would be handed back to their owners, who would then finish up the soup, At first I thought, the soup must be unlimited. But as I finished and handed my own bowl, I saw that a hot clear broth was poured on it (soup-wari), thinning the viscous leftovers and making it edible on its own.  Which was thoughtful, because the bowl of noodles is more than a handful, and the lingering taste of that soup accompanied me as I walked happily along the dark, icy streets of Tokyo.

As it was, the tsukemen was an unplanned but very much welcome intrusion in my trip. It boded well for the rest of my stay in Japan – one of the highlights of the entire tour happened right during the first few hours  that I was trodding on Nihon soil. And it wasn't even expensive - when my stomach had been filled and I was thinking right again, I realized the currency conversion I was using was the opposite of what it should be, and the price of the specialty bowl I had just eaten was equivalent to the price of (inferior) ramen in the Philippines. 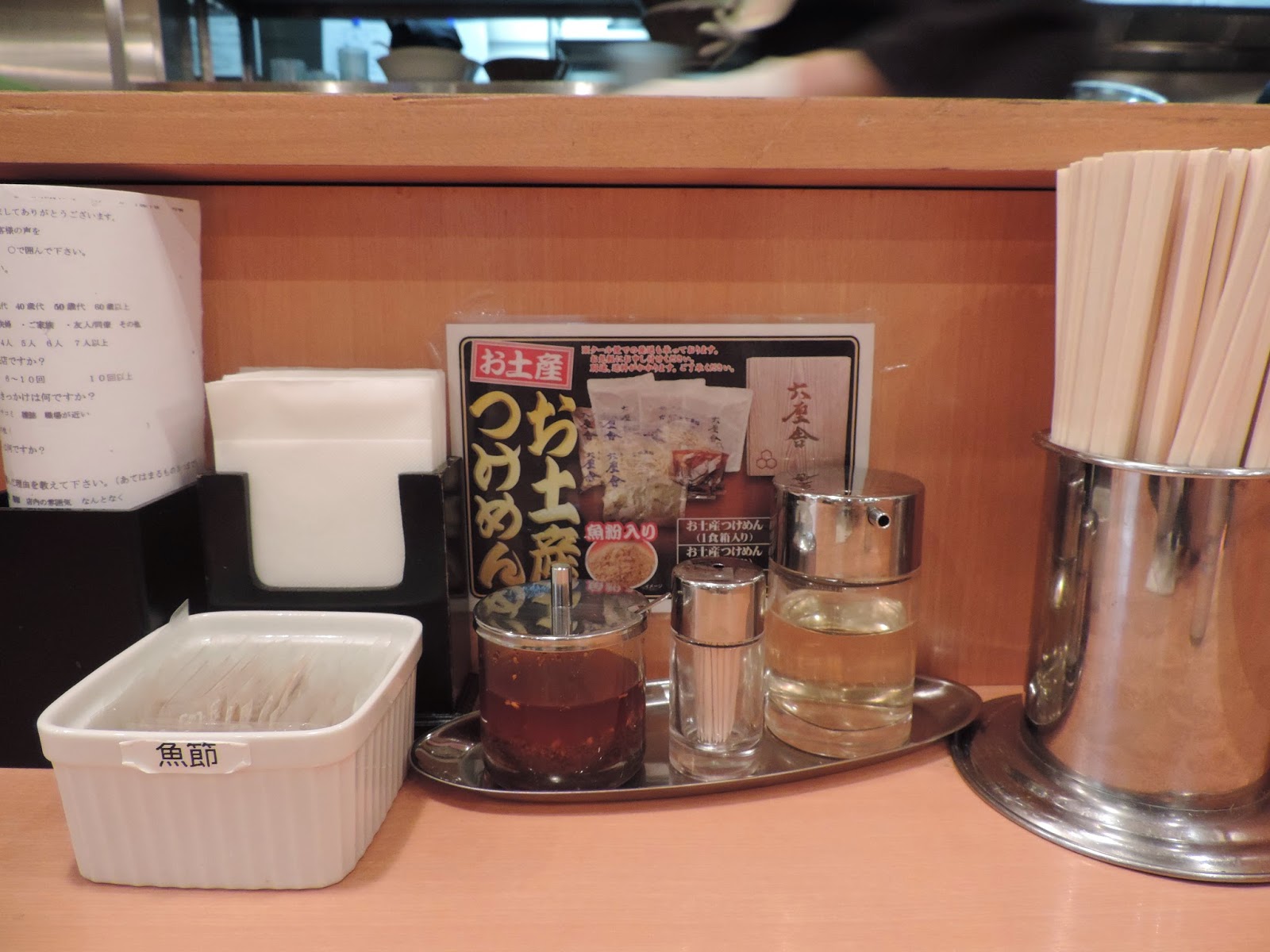 Compared with the ramen bars I would subsequently eat in during the course of my vacation across Japan, the table was sparse, carrying only packets of bonito powder and the condiment tray of vinegar and chili oil. 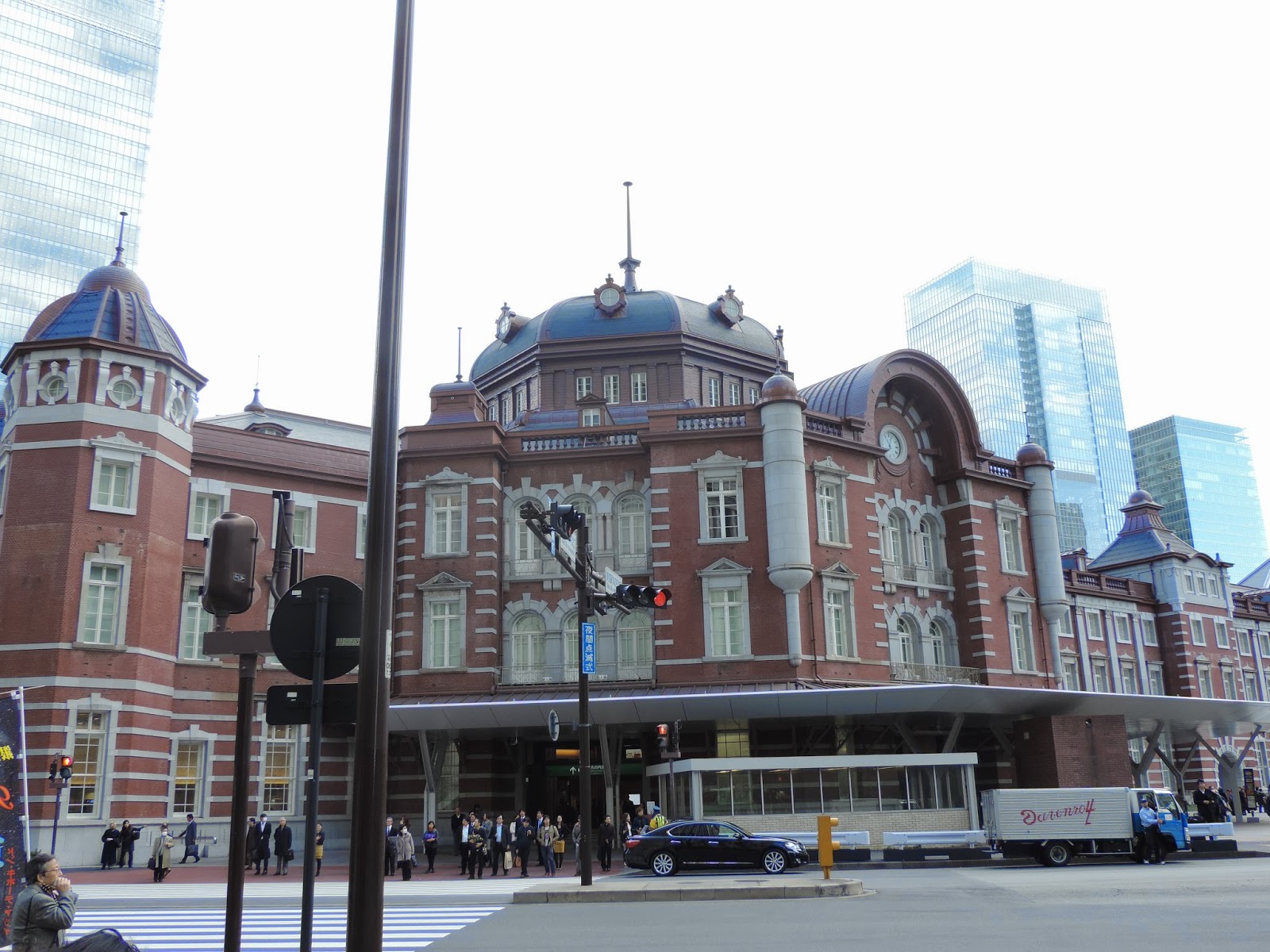 Email ThisBlogThis!Share to TwitterShare to FacebookShare to Pinterest
Labels: food finds, from around the world, pancit (noodles), sabaw (soup)

Lou, I can't even keep up the posts for this blog, hehehe

Ever since I stumbled on your Blog, I always enjoy your posts. It is not cluttered with ads and sponsored posts. Thanks a lot for sharing. I am looking forward to your adventure in Japan.

Thank you, I am also looking forward to sharing my adventure in Japan, but I just can't seem to have the time to write about it. I'll try to post soon!

oh my gosh, I think I recall having been to that exact area a few years back. except I was this weirdo picky eater kid at the time and didn't dare venture outside what was comfort food to me at the time (which didn't include Japanese food); I feel like I wasted my entire trip. D: i've learned my lesson over the years, though.
been following this blog for a while now, just thought you should know I'm a huge fan :3

Thank you very much for taking the time to let me know, Yuki. Hope you get to go back there and enjoy what you missed!

Hi Mang Jerry, so sorry I've been swamped - work, family, travels, school activities - and it's so frustrating to not be able to write about all the wonderful experiences, food -related and otherwise, I've had all over the Philippines, literally from Batanes to almost Jolo. I'll be on board soon, promise!

Kumusta kala Aro? Missing your post. You know your my only hook up from Pangasinan. So please be back soon. OOO