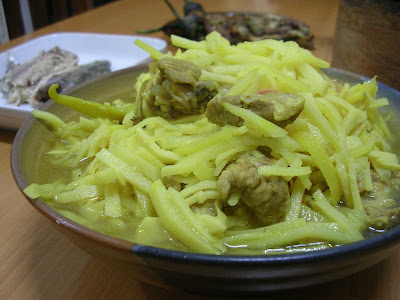 Mirroring other organizations in the metropolis, the staff in the agency I work for is a heterogeneous assemblage representing most regions in the country. This inevitably results to a cornucopia of regional delights for everybody after long holidays. More commonly, though, the regional spread is repeated every day, at lunchtime.

While I used to scoff at the elders for bringing home-cooked lunch during my early years, I have joined the fray, so to speak, ever since I gained access to a home kitchen. I realize now how much I missed during those years of eating out every single meal every single day. For lunches at the office prove to be a veritable tour of the home kitchens scattered across Luzon, Visayas, and Mindanao.

The variety of the food that I encounter is as multifarious as the 7,000 islands of the Philippines. I bring my own lunch from home not just for the economic and health-wise benefits of it, but also for the chance to eat it with others. The moment someone opens his lunch box I am all eyes, and ready to ask ever so many things. What is that? What is it made of? Is that a regular feature in your home in the province? Who cooked it now? How does it taste?

The last question always elicits a generous offer of a portion, which I have been leading to all along, of course. After the tastings, conversation naturally revolves around what we ate during our childhoods, provincial favorites, comfort food, so that I learn so many things as well as get ideas on how to introduce more diversity into my own home-cooked meals.

This is a result of one of those lunches. Labong or bamboo shoot is definitely a conspicuous ingredient of rainy season meals, but I only know three ways of cooking it – sinagsagan with saluyot, boiled with chicken or pork, and atsara/adobo, all rainy season staple dishes in Pangasinan. This one, brought on several occasions for lunch by a colleague who hails from Majayjay, an elevated municipality lying at the foot of Mt. Banahaw in the province of Laguna, is a variation of the atsara/adobong labong.

But while atsarang labong is eaten as a side, this one is main course. It is called paksiw precisely because it is such – julienned bamboo shoot stewed in previously boiled vinegar spiced with garlic, ginger, fresh turmeric, black peppercorns, sliced onions, siling haba. The sahog is either tilapia – bangus is probably good, too, though I haven’t tried it yet – or pork. The lemony hue from the dilaw makes it look very appealing.

It tastes familiar – like atsarang labong or adobong labong, but it has that unmistakable earthy, curried flavor of the luyang dilaw, and the richness of the sahog. It is not cooked dry as the atsara, but a little pickling broth is left over, begging to be spooned over rice. The sourness requires a sprinkling of salt. Or fried tuyo. As I didn’t have tuyo when I made this, I just had a saucer of salt on the table, but substantiated it with tortang talong – eggplants charred over open fire, peeled, mashed, dipped in beaten eggs, then fried with chopped garlic and onions.

Mix half a cup or less vinegar with 1-2 cups of water, peeled and sliced thumb of ginger, sliced onion, smashed three cloves garlic, peeled and sliced turmeric rhizomes (about three pieces), a pinch of whole black peppercorns. Put this in a cooking pan (preferably a kaldero) and bring to a fast simmer for 5 minutes. If using pork, mix in and bring to a boil until tender, adding water if it is starting to dry up. When the pork is almost cooked mix in a cup of parboiled labong.* Cook until the labong is soft. Season with rock salt to taste and put in the siling haba. If using fish, put in at this point, and cook until the flesh has turned opaque. Serve hot.

* Bamboo shoots are usually sold at markets julienned and parboiled, for longer shelf-life. If the labong is fresh, boil first before storing in the ref.