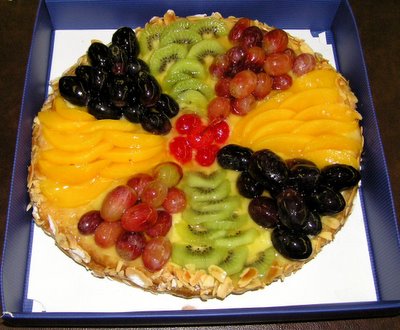 I was tasked by my colleagues with locating a Christmas present for our unit head a few days before Christmas. We couldn't give him wine, as was the original idea, because he doesn't really drink, and it was very difficult to give him food because he suffers from gout. We pondered over it, the discussion going on over several days.

One time I was at the Power Plant Mall Rockwell in Makati City on an errand, and I passed by Bistro Délifrance. I suddenly remembered Delifrance's Christmas fruit tart.

I had eyed it so longingly a couple of years ago, it looked so heavenly with its load of fresh fruits over cream in a phyllo crust studded with almond shavings. But it was pricey, and being ever so practical, thinking I could make something like it for maybe less than half the price, I contented myself then with 2 dozens of the miniature version.

They did not disappoint - they were delicate and so good. I have this love affair with mini fruit tarts. I mean good mini fruit tarts - I eschew others, like those made by Le Coeur de France. The Starbucks kind I like, but they seem to have ceased offering it in their many outlets. Traffic Light by Bread Talk is also nice, and available year-round.

Delifrance's is something else, though, made more attractive by the fact that you can see right there how it is being made, so you are guaranteed that the tart you are buying is freshly made. Which is very important because it spoils easily.

Anyway, I consulted the four colleagues with whom I was going to share the gift. Like me, they thought it pricey, at P650 for a 9" diameter tart. Then I recalled the reason I didn't buy it before - because it was just like the home-made crema de fruta we always had in the family for Christmas. Having had a streak of boldness lately (read: walang-hiya), I volunteered to make a crema de fruta as our gift.

They all agreed - a homemade gift is always better than a store-bought one.

But as fate would have it, the Delifrance baker suddenly announced that my tart is finished - newly-minted and ready to go inside a gift box, and would I want a nice ribbon with it? I am never one to refuse a good thing, since this tart really looked so inviting inside a box. 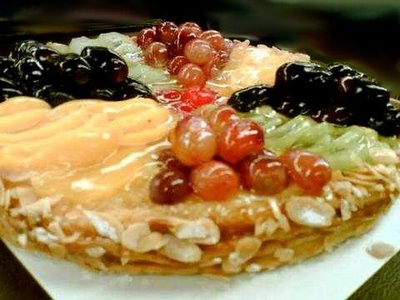 I thought it looked good enough to persuade the kuripots (tight-fisted, figuratively speaking, which includes me). But the main reason I had no second thought in accepting the tart, with nary a squeak along the lines of "I did not confirm the order!" was the thought of a possibility of being given a slice, a small taste, of the tart by the recipient.

My colleagues loved the tart (how it looked, anyway), and became so excited in giving it. It was a very good decision - the gift was very well received. Of course we all feigned decency when offered a taste - we all said it was a gift meant for him to bring home to his family, hopefully it could last until their Christmas noche buena. But of course, deep inside....

The whole incident, though, brought back memories of the crema de fruta which became a traditional Christmas dessert in my family when my mommy introduced it one time many years ago. I learned how to make it from her and made the dessert for many Christmases afterwards. It had been many years since I last made one, probably because I haven't been involved in preparing Christmas feasts since I got married, letting my in-laws take care of everything (they had different tastes from mine, to put it subtly).

And so I resolved to make crema de fruta again, last Christmas. I couldn't make a big one, though, like how I used to, since I knew it was going to be just me and the hubby, with small kids who are in their Jollibee phase. But I made quite a few small ones - for the four colleagues who were salivating after the Delifrance Christmas fruit tart, and for all other friends for whom I didn't have a gift yet (actually, almost all, since I only had time to buy gifts for their kids). With a red and gold ribbon wrapping around the containers, crema de fruta became my signature Christmas gift for 2005. 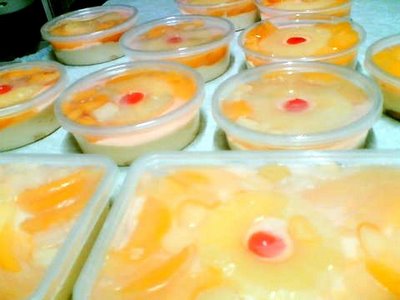 I used fruit cocktail preserved in syrup, and the difference from the fresh ones became fairly evident - they were very pale, unlike the fresh fruits in the Christmas tart which sported vibrant colors. And of course I couldn't arrange them as artistically. For a tropical touch I put in a pineapple slice on each and used lychee-flavored gelatin to hold the fruits together, on a cream and broas (ladyfingers) base.

But next time I'll try using fresh fruits. On a real pie crust. It's nice to dream on.

Kai, your crema de fruta looks good and delicious also. But I agree with you that Delifrance's fruit tart looks tempting and oh!so delicious.

I was almost tempted to buy one and gobble it up by myself, Lani!

Wow! So tempting...even in your photo's really look amazing. How are you today???