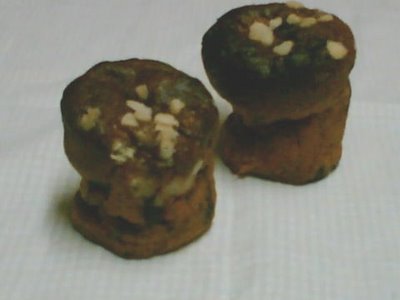 This post is for Barbara, who blogs in New Zealand at winosandfoodies.com, in celebration of her successful surgery and hopes and wishes for her full recovery. Incidentally, it's also her blog birthday on the 6th.

Barbara's family usually have store-bought panettone for Christmas, but earlier last month she baked some, and explained a little history of the bread. Along with good wishes along her way for her impending hospitalization, I promised to bake a panettone myself. However, with all the holiday frenzy, and the Christmas twist which left me with two small kids sans their nannies for the last two weeks of the year, I wasn't able to make good on that wish.

Good thing, though, that panettone seemed to be the "in" Christmas bread in 2005 in this part of the globe. Previously, this Italian bread was probably known only to Rustans Christmas shoppers, and maybe other specialty stores carrying international delicacies, and probably Filipino travelers to Italy. Last Christmas it was conspicuously absent from Rustans shelves (at least at the Power Plant and Shangri-la Plaza outlets), but individual-sized ones were the corporate giveaway of a new five-star hotel, and other hotels were selling them like hotcakes at almost give-away prices.

Fortunately I have good friends in the right places, so I was able to get hold of two individual-sized panettones, made by the bakeshop of The Crowne Plaza Galleria Manila. We had them for our Christmas day brunch, lightly toasted. Chocolate chips studded the dark bread, which was very moist, oozing with what I took to be butter that had melted from the toasting, with a sprinkling of sugar crystals on top. Delicious, so apt for Christmas. The bread's texture was very similar to my favorite Filipino pastry, ensaymada, the best of which I'm always in search for, though panettone's is darker, in looks and flavor, plus it is denser, the crust even blacker and burnt.

I can't wait for next Christmas - I'll probably be touring hotel bakeshops this year to look for panettone.

Hope this year's a good one for you, Barbara, and for all the years to come. Same goes to all fellow bloggers and readers out there. May 2006 find you well and bring you great food finds! 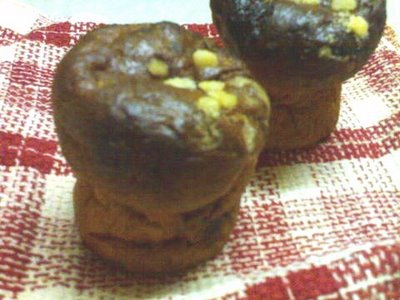 Update, Jan. 6, 2005: Seems my panettone benefactor has read this post, and is giving me more! Thanks Miguel!

now i know i should at least try the panettone's i see in the groceries around here! happy new year kai!

I'm sure the panettones in New York are authentically Italian, Ces.

Havent tried this but looks so yummy...

They are quite yummy, Grace. I heard there are versions with liquor, and preserved fruits, much like a fruitcake, so it's a good alternative Christmas bread. But I love your fruit tarts!

Karen - that so sweet of you. Thank you. I'm slowly catching up on blogs as I am able to sit for longer at the computer each day. Happy New Year.