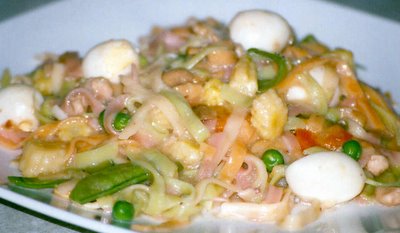 If I have one very obvious weakness, it is for pancit, or noodles. I could never turn down any, even spoiled ones, claims my husband. And with South-East Asia being the noodle region, and with imported dried noodles flooding the market these days, I have hoarded packs and packs of dried noodles from various groceries that I visit, most of the time with nary an idea how to cook them. The labels in foreign characters (they look Arabic) aggravate the situation. But cooking is largely experimental, so I try to be brave.
I've had these multi-colored, dried noodle "nests" for a while, in a package which I took to have come from Indonesia, or Malaysia. One morning, feeling a little bit put off by the usual breakfast fares, I turned to the pack and stir-fried the contents, along with previously boiled young corn, green peas, snow peas, sliced button mushrooms, and some chicken meat, chopped ham and boiled quail eggs.
It turned out quite tasty, with a multi-textural feel, and was very colorful, which made it attractive enough to eat. I'm also happy about the load of vegetables so early in the day. I think it's a good enough entry for ARF/5-A-Day Tuesday #5, which Sweetnicks is hosting weekly. As I can say, you can't go wrong with noodles. Or maybe it's just me.
Or maybe, it's just an IMBB hang-over.