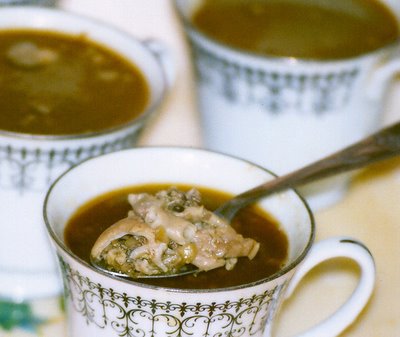 In Pangasinan, and I think in most parts of country, weddings, baptisms, fiestas and other big gatherings usually call for the slaughter of a pig, or several pigs actually, to feed the guests at the reception. If the reception is held in a hotel or restaurant, tradition merits a separate party, called a pagatin (literally to step on), on the eve of the occasion or usually after the official reception, at the home of the bride or celebrator.

A pig is favored because all the animal's parts, including the blood, can be cooked into different dishes. Pangasinan being surrounded by the South China Sea and criscrossed by rivers, streams and creeks, not to include the flooded ricefields during the rainy season, fresh fish and seafood are regular features in daily meals. So parties call for a taba ed bibil, literally "lard on one's lips," since fatty hogs are very much favored. Months before the scheduled party, a belek or fattening hog is procured for careful tending in anticipation of the richness it will eke out.

In small gatherings, or during the aforementioned pagatin, which is usually limited to family members and extended relatives, a smaller, "wilder" animal is preferred. Goats are mainstays of farmhouses in the barrios, led out to pasture and exercise every morning, and "come home" on their own every afternoon. The goats are either owned by those tending them, or tended for other families in kasamak* fashion. These goats are bred mainly for family reunions, particularly in remembrance of the death anniversary of a loved one, during All Souls Day, Christmas holidays, adult birthdays, and other excuses for a gathering around the table, including an excuse to drink up, with friends, with kindergarten classmates, and a thousand and one other reasons.

A goat has a lower fat content than a pig, requires low maintenance (just grass, sunshine and a little patch to run around), and gives less relative to the meat-bone ratio of a pig. So there's no worry of a goat meat overload, unlike when a pig is slaughtered and you'd have to contend with eating pork every meal for an entire week then worry about an impending heart attack.

But like how a pig slaughter and its cooking for a feast generates a spirit of community, killing a goat also brings to the fore the Filipino bayanihan spirit, whereby neighbors come along and help gratis. For of course, several people are needed to tie-up the goat, hold it for the fatal slash to the neck (may he rest in peace), for the ritual pulpog to burn the hair and skin, to carve the body, then to cook the various parts in spices.

Men commonly cook the goat meat and parts. I think this is just to continue the task of preparation from the slaughter to the table. Goat meat, too, is prized as pulutan, because it is gamey, in both senses of the word, thus requiring long cooking and a lot of flavoring ingredients and spices. Perhaps the men want to tailor the taste of the dishes to complement the Philippine national drink San Miguel pale pilsen or to several rounds of the more preferred (in price, not in taste) bilog or lapad (terms for the containers of the local gin).

Kanding Kaldereta
Like a hog, all goat parts are used in cooking various dishes. The bony meat is slow-cooked in a caldereta with tomato sauce, bell peppers, peas, garbanzos or chickpeas, carrots, potatoes and pickles. The innards are chopped fine then cooked in a soup flavored with calamansi (local small limes), ginger, black pepper and a little of the goat's bile. This is called papaitan or pinapaitan, meaning "made bitter" in the Pangasinan and Ilocano languages.
Nothing is wasted. The skin, torched to singe the hair, and the mouth and ears are chopped finely, boiled in ginger, and tossed with minced onion, finely grated ginger and vinegar, for a warm and chewy kanding kinilaw, or kilawing kambing. 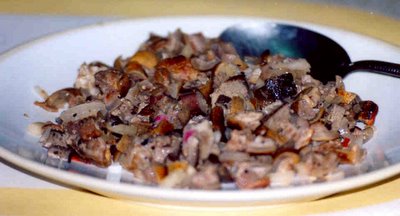 Of course, the goat dishes are not solely for pulutan, but mainly to eat with the family and relatives, sharing good times and catching up with one another's lives. They are meant to tighten the bond between blood relations by partaking of food at a table laden with family roots and tradition.

*Kasamak (land tenant) is the Pangasinan term for a farmer who tends the landowner's real estate properties, with sharing of the proceeds of the land's output based on what was previously agreed upon and what is common practice, although nowadays it is determined by regulations set by the Department of Agriculture, especially if the property is under the Comprehensive Agrarian Reform Program or CARP. 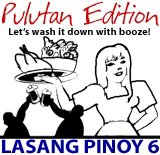 The kasamak can also tend for the landowner animals intended for selling for profit, or for future use, called iwi. If the animal is sold, sharing is about 50-50 after capital and tasa (advances made by the owner to the kasamak). If the animal is killed for meat, the owner gives the kasamak a patronage fee.
All these because the Philippines is still largely an agricultural country, with a feudal type set-up.

Great post, Kai! another information packed article. I love how you incorporate history and regional information with the food. It's always a learning experience reading your posts.

Wow, I learned a lot from this post. Thanks for sharing Kai.

Very informative, Kai. You really know your culture well unlike me (hehehe).

a couple of months before i became a blog-ician:) my mom cooked pinapaitan when she was here, i didn't even bother helping out! now i wish i did! i don't even know where she bought her ingredients here in NY!lol!but it's definitely not goat..that i haven't tried! meron pb?

very informative ha. i remember my dad's bros cooking all kinds of goat dishes. mula pagkatay hanggang pagluluto. but when i was young, i liked kilawen at kalderetang kambing lang. i was not keen on trying papaitan kac nga i saw all the green stuff but they said goat is better than pork or beef. mas malinis nga daw kac damo lng ang kinakain. kumain din nman ako later on.... guess when? old enough to handle booze!
- Iska